Today marks 1 year since my first post. This was before Laelia was born, and I was documenting the different things I was making for her before her arrival. She didn’t even have a name yet! This blog had a totally different look; 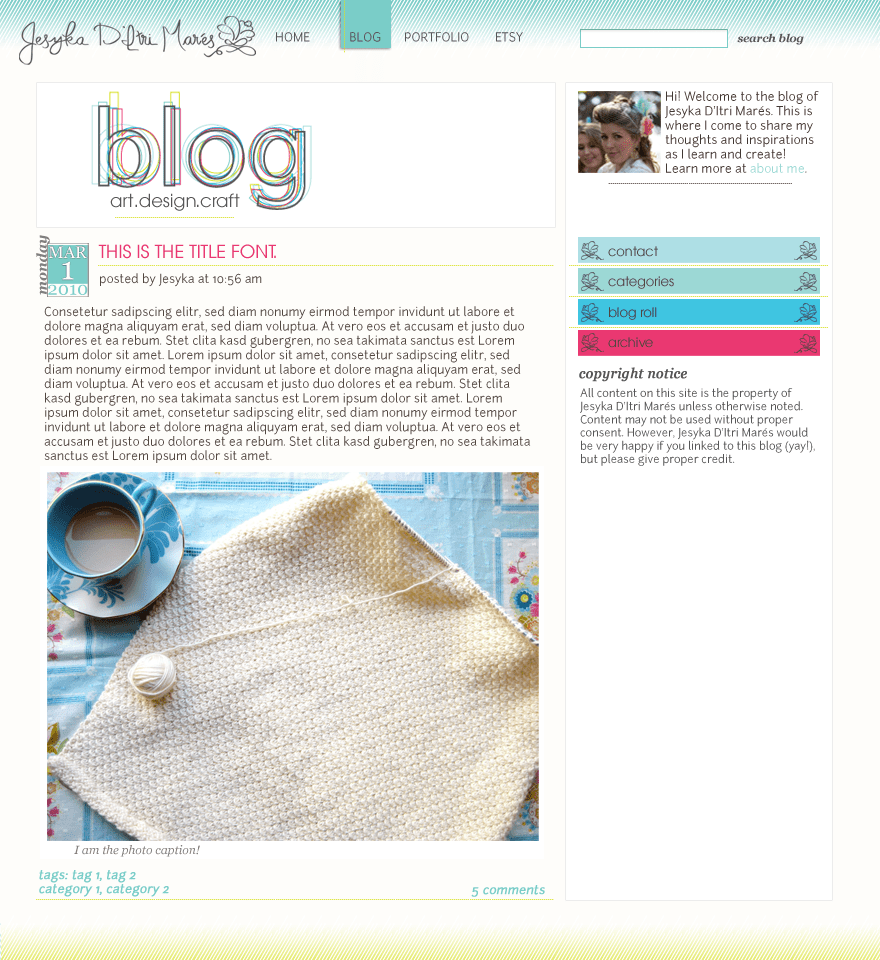 I had designed it in photoshop, but most of it never actually made it to the web. Part of the fun of being married to a programmer is that I can have pretty much whatever sort of website I want, but really that’s only in theory (or in “hypothesis”–the way people misunderstand the word “theory” really bothers me!). Tyler is busy building bigger and better things, and it’s hard to ask someone who does something for a living to come home and do it all night too. Besides, we usually end up arguing about design functionality vs. design aesthetics. (It’s not hard to guess who’s at which end of the argument). I usually end up recognizing that Tyler knows way more about web stuff than I do, and coming from a fine arts/product/apparel design background, I should defer to his judgment when it comes to the web. But then, I always find what he makes lacking in decoration, albeit, he does superb minimalist design. And while I don’t like clutter, I’m no minimalist. So I never really got into blogging regularly because (shock!) I wasn’t that into the way it was looking. I tried a few wordpress themes over time, but I never found anything I really liked until January.

A few things happened by the end of January that made me think about blogging on a regular basis; 1) In October, Tyler and I decided that if I didn’t start making progress with working at home by June 2011, I would start to look for a job. We both don’t want to put Laelia in daycare, and both of us believe that there is no reason for me to work out of the house with the sort of work that I can do. So this helps us to double our efforts; Tyler in being more supportive of taking over childcare when he gets home from work, giving me the time to really put my all into — whatever it is that I am doing. The thing was, that in October the holidays were right around the corner, so I couldn’t get my own stuff going strong until January. 2) Tyler bought me the Domino book for Christmas. Doesn’t sound like that big of a deal, but it was the catalyst that got me wanting to redo everything, and looking at people’s blogs and remembering “I can do this, I should do this“. 3) I stopped thinking about having Tyler build me a site, and finally found a simple WP theme and dove into figuring out how to customize it on my own (although, Tyler is good for small adjustments here and there, and now this theme hardly resembles what it used to). It’s weird, but sometimes the smallest things hold you back; having the blog look in a way I found “acceptable” allowed me to get really into it. Kinda like how when I bought my first car, I started going to the gym on a regular basis and lost 30lbs in 4 mos!

SO! That is why I didn’t start blogging regularly until January. And now I haven’t blogged in a week, and I really don’t want to get out of the habit of blogging. In my defense, since I have put my parts of my portfolio online, I have gotten a lot of inquiries about freelancing, and I have thus been busy with a few deadlines a week, contracts, and proposals, filling orders, and with Tyler working 13 hour days, and a teething baby, I’ve been lucky to get 4 hours of work in a day (which has been taken out of my sleep). Good news is my efforts have been paying off! Bad news is, we are still trying to juggle it all as a family. We’ll get there.

I have a lot of plans for this little bloggie, in both what I want it to look like, and some projects I want to share with you. Next week, I’ll be back to blogging as regularly scheduled, and I think this next year will be WAY bigger than last. :)

categories / Blogging + Elsewhere
Tags / Blog Anniversary
Warning: count(): Parameter must be an array or an object that implements Countable in /nfs/c04/h06/mnt/59434/domains/visualvocabularie.com/html/wp-includes/class-wp-comment-query.php on line 405