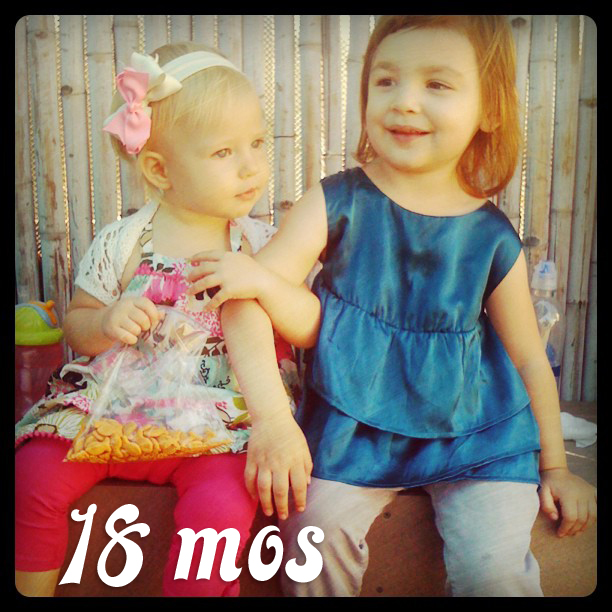 Last Monday was Laelia’s half birthday! It was also the third birthday of our friend, Miss Isabella. We spent the day with her parents and her grandmother at the Aquarium of the Pacific. It seemed Laelia thought the benches were cooler than the fish (they make a nice echoing sound when you pound on them), but she did pet a bamboo shark which definitely makes her braver than me!

– runs. It’s kind of stompy, but it qualifies.
– makes adorable attempts at jumping; I think she gets one foot off the ground now.
– has a few more dance moves in her arsenal.
– makes Lego sculptures with her duplo blocks.
– does puzzles with large pieces.
– “talks” on mom or dad’s phone.
– loves Hello Kitty. I blame her HK print cloth diaper. We were in Buffalo Exchange the other day, and while I was talking with the buyer who was appraising my clothes, I hear Laelia say “Ho! Hoooo!”. I was like “Ho? What? Where is there Hello Kitty in this store?!”, and there she was as a backpack on a hook. Laelia had real tears when I started explaining that we have to say bye bye to Ho. Our first fit for an item I wouldn’t buy her!
– loves Mickey & Minnie. I blame Disneyland (which she has been to maybe 20 times already). :D
– climbs on her rocking horse by herself, and then rocks back and forth laughing hysterically.
– has slept a total of 5 nights in her crib until the morning!
– walks to the pantry, opens the door, finds her crackers and eats them (if the rubberband is not on the door).
– climbs on the kitchen table and gets a banana from the bowl. Sits on the  table trying to peel the banana herself until she whines for me to do it, and I exclaim “what are you doing on the table!” (again).
– asked me “why?” after I told her not to drink the bathwater when she was in the tub one night last week. I’m pretty sure she didn’t understand what it meant, but I almost cried anyway.
– breastfeeds about every 2 days. I’m wondering if she’s weaning and I have mixed feelings about it. I wanted to go until 2 years, and it’s great having breast milk around for all of it’s health properties.
– draws on any surface in the house with any writing utensil she can get her hands on. Thank goodness for the magic eraser! But it’s especially adorable when she lies on the floor and colors in her coloring books and kicks her feet. *swoon* Artist mommy can’t take away crayons.
– comes to me after injuring herself in the slightest way for me to kiss her boo-boo.
– eats mostly fruits; loves eggs, potatoes, noodles, crackers, string cheese, and yogurt, sometimes loves artichokes, and occasionally will eat bread. Cries if you put the raspberries or blueberries away.
– still insists on feeding herself. She even spoons her own yogurt and soup, and forbids anyone to hold her spoon for her. An independent spirit if I ever saw one (but why does it not apply to falling asleep?!).
– picks out a dress and brings it to me. Sometimes I end up with a pile on my lap. It’s especially funny when she does it before I get out of bed and I open a bleary eye to a dress being shoved into my face.
– holds up one finger when you ask her “one?”.
– gives the most giant nods to confirm she wants something. I seriously wonder if she throws her neck out.
“Laelia, do you need your diaper changed?”
*pause*
/GIANT NOD
– correctly points to anything mentioned in the song “Head, Shoulders Knees and Toes”, with a bonus of “teeth”, “elbow”, and “eyebrow”.
– when you ask her to say “please”, she touches her knees. (See above)
– climbs into my desk chair, grabs my stylus pen and plays with it on my tablet. She scores 100 cute points for this, but there is an annoyance penalty every time I’m on my hands and knees searching the floor for the only stylus pen I have left that works.

I’m sure I’ll remember more later, but that’s enough for now! :)
Happy half birthday my LO!

categories / As Laelia Grows
Tags /
Warning: count(): Parameter must be an array or an object that implements Countable in /nfs/c04/h06/mnt/59434/domains/visualvocabularie.com/html/wp-includes/class-wp-comment-query.php on line 405