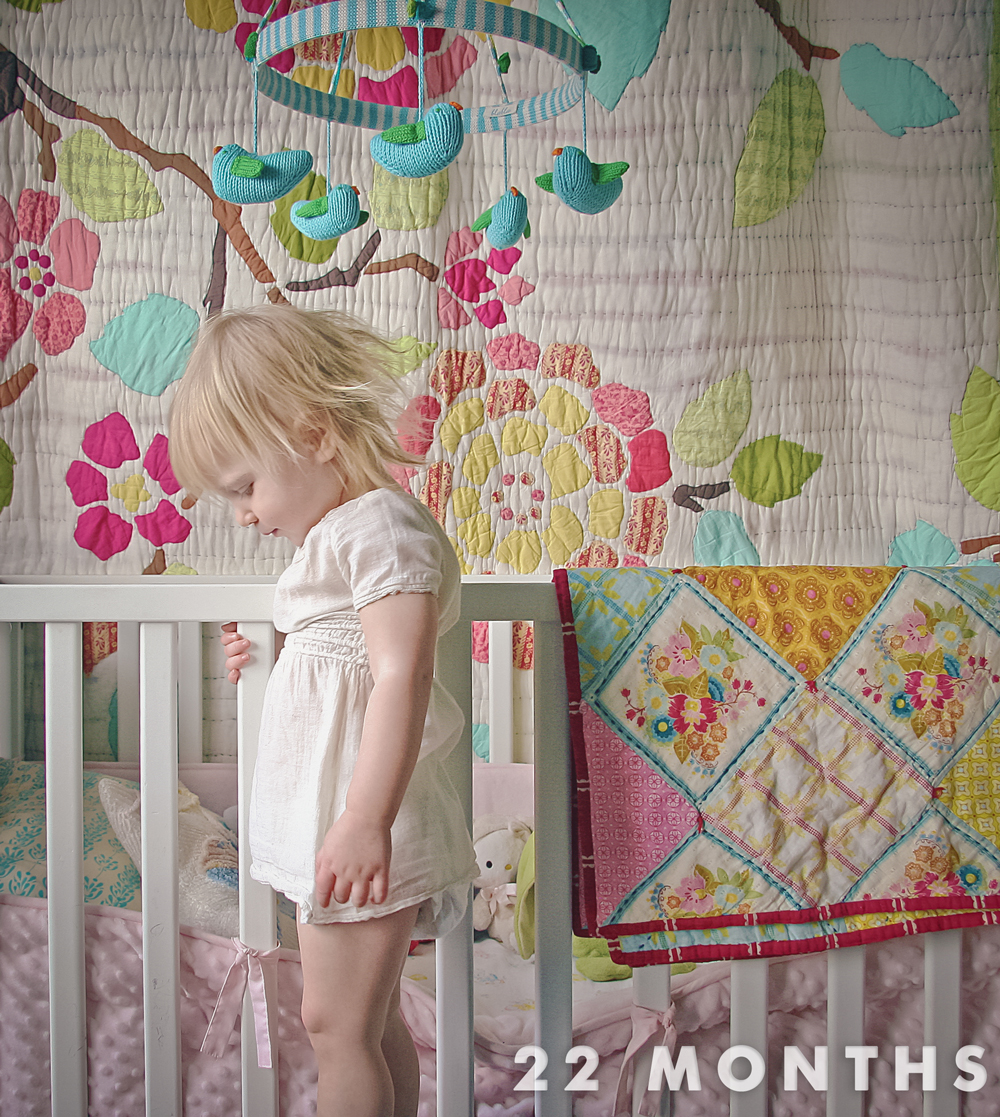 Wow, 2 months away from two years old! We’ve noticed that she is certainly not a baby anymore…

The biggest change that has happened over the last month is that Laelia has fallen asleep  for her naps in her crib by herself for the past eight days. Now, many of my friends and family (and even my birthing instructor!) have said something about how sleep totally changes around two. This always sat well in my mind because it is the age when children really come out of babyhood and are considered little toddlers. If you have read this whole blog, you know that Laelia is not a crib sleeper. She would wake up the moment she felt her little body being lowered into the crib. For the most part, Laelia is extremely independent. She won’t let you feed her, she won’t let you brush her teeth, I have to pin her down to brush her hair, she must put on her own headbands and sunglasses, and now she is even trying to take over dressing and undressing herself. But when it came to sleep, she would only fall asleep on someone for the first year, and most of her second year.

I’m sure plenty of other parents would have gone nuts after almost 2 years of naps in this manner, but our situation allowed for us to accommodate her and we enjoyed the cuddles for the most part. I work from home and I don’t have health problems or back problems, so holding her while she napped didn’t impact my life very much. Also, even if it sounds like a burden to always have your baby take their naps in your arms, it was routine and she rarely made a fuss. She went to sleep in minutes, and I could quietly work at the computer while holding her! The alternative was a big cry fest that would last (and waste) hours, which we know from the few times in which we attempted to put her down so I could do something more physical (although, when she was really young, I just had her in the Ergo and I would continue house chores–laundry, sweeping, etc–with her on my back). It was simply more efficient for us to nap this way. :) There was a few months where she would go to sleep if you just cuddled next to her. As nice as that was, somedays it would take over an HOUR for her to get to sleep which translated into an hour of my day wasted and would become very frustrating for me if I had a deadline… Eventually she transitioned into her bringing me her blanket and about a million Mickeys, Minnies, and Hello Kittys to take a nap with. The biggest fuss about this was that I could only handle one or two stuffed animals and still be able to have a good hold on her! She eventually would settle with holding just one (and sometimes none because I just didn’t want to deal with Mickey’s nose in my face!). 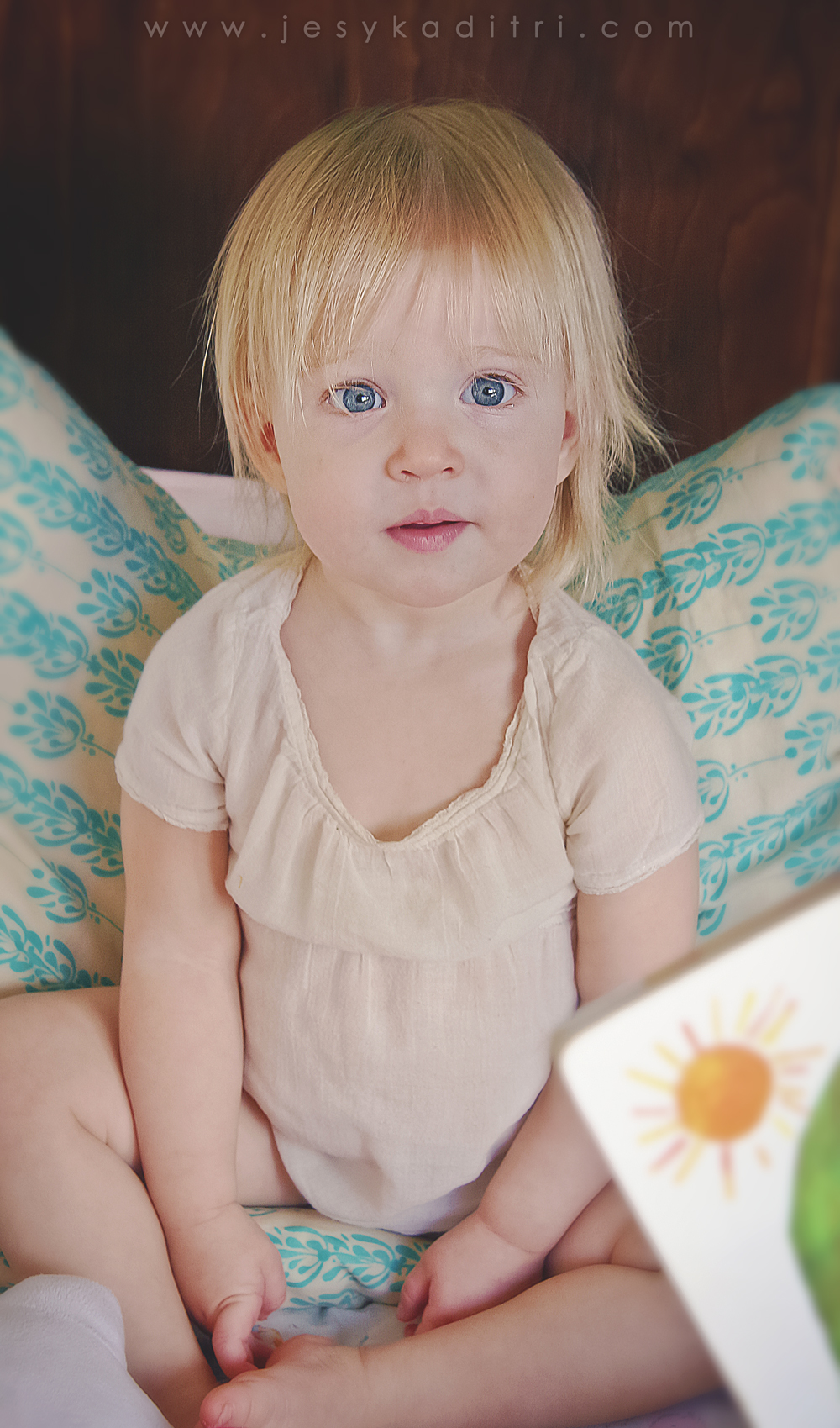 This makes me giggle so much!

I’m not sure exactly when, but she started to understand sleep and naps much more thoroughly–she even makes a fake snoring sound! I think she picked it up from a Mickey cartoon because my husband and I aren’t really snorers… Anyway, she began to want to put her stuffed animals to sleep.  She would also get really excited to go in her crib, but mostly to bounce and turn on and off the light (we have now inched the crib away from the light switch) to read her books to her stuffed animals and then set them “ni-ni”. She was completely content and occupied doing this for a few hours! I  kept checking on her and asking if she wanted up or out and she said “no”. I thought–this can’t be right!? Is this okay? Is there something wrong?! Nothing was wrong, of course, but I just couldn’t imagine that her playing in her crib for so long was something she really wanted to do. Then she just fell asleep in there after all those hours. Just like that. And I was shocked! And I was even more shocked when it happened again the very next day! The day after that I think she caught on and put up a bit of a fuss when I tried to walk out of the room. So I asked her to lay down so I could tickle her back, and then it turned into a HUGE fuss. I tried to maintain my composure and not lose my temper but it eventually happened and I had to walk out of the room. I came back in after a few minutes and asked her nicely to lay down so I could tickle her back and read a book and she complied! She fell asleep soon after we read her book. The next day, she pointed at the door and said “door? bye-bye!”. She was shooing me out! And it’s been that way everyday since… “bye-bye!” and blowing kisses, falling asleep with her head on her pillow… 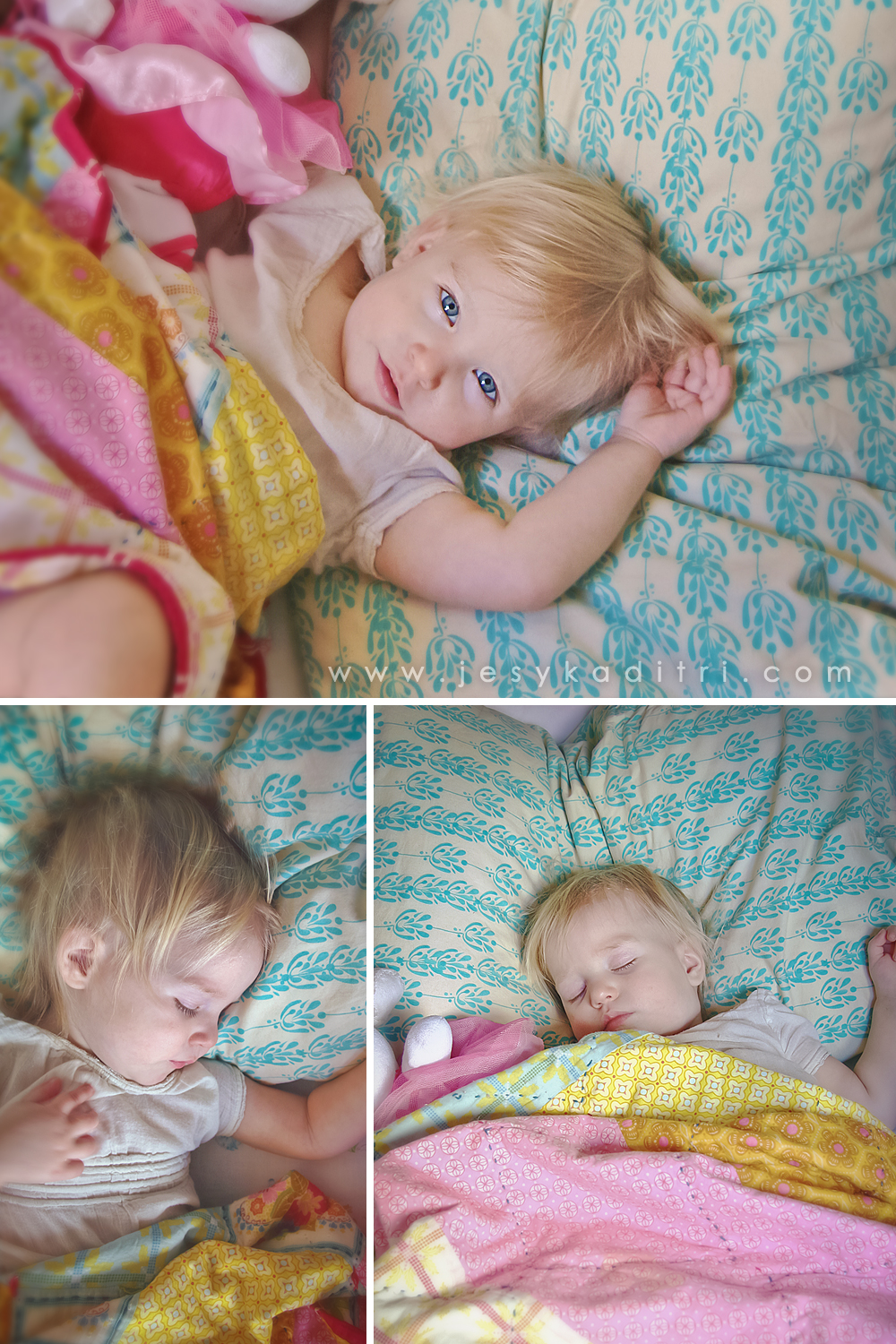 She does have a tendency to change-up her sleeping habits, so we’ll see how long this lasts, but it would be nice if this was the final transition. We are hoping it will translate into a full nights sleep in the crib! :)

As far as her birthday goes, I haven’t done any planning yet, and I’m feeling the pressure! I already had Laelia’s birthday board this time last year… >_<.

categories / As Laelia Grows
Tags / crib, laelia's nursery, sleep
Warning: count(): Parameter must be an array or an object that implements Countable in /nfs/c04/h06/mnt/59434/domains/visualvocabularie.com/html/wp-includes/class-wp-comment-query.php on line 405