A Tale of Two Bathrooms

My BFF Beth, along with her husband, two puggles, and children (one safely in the womb), recently moved back to Los Angeles (better yet, they moved to my neighborhood–Sherman Oaks!). They bought a drop-dead gorgeous house–seriously people, this house is pretty much my dream house! I’m talking moulding and wainscoting, built-in shelves, exposed beams, Carrera marble countertops in the kitchen, a wading saltwater pool, and one of the most beautiful home gardens I’ve ever laid eyes on. It also has a sound proof room as the previous owner was a composer in the industry. They spent a lot of time and money renovating and restoring the house to its roots as a traditional style home built in 1937. During one chat with the them, they explained to me that there was not one blade of grass in the entire yard that she did not put in herself!

You might be wondering why I had so many chats with the previous owners, or why I know so much about this house–well, they were so busy with the yard, the kitchen, and other parts of the house that in their 11 years of living there, they never got to the bathrooms (besides installing a perfectly acceptable 1/4 bath near the kitchen). And, I’m afraid to say, they were quite bad. They stood out as the only blemishes in this otherwise perfect home. 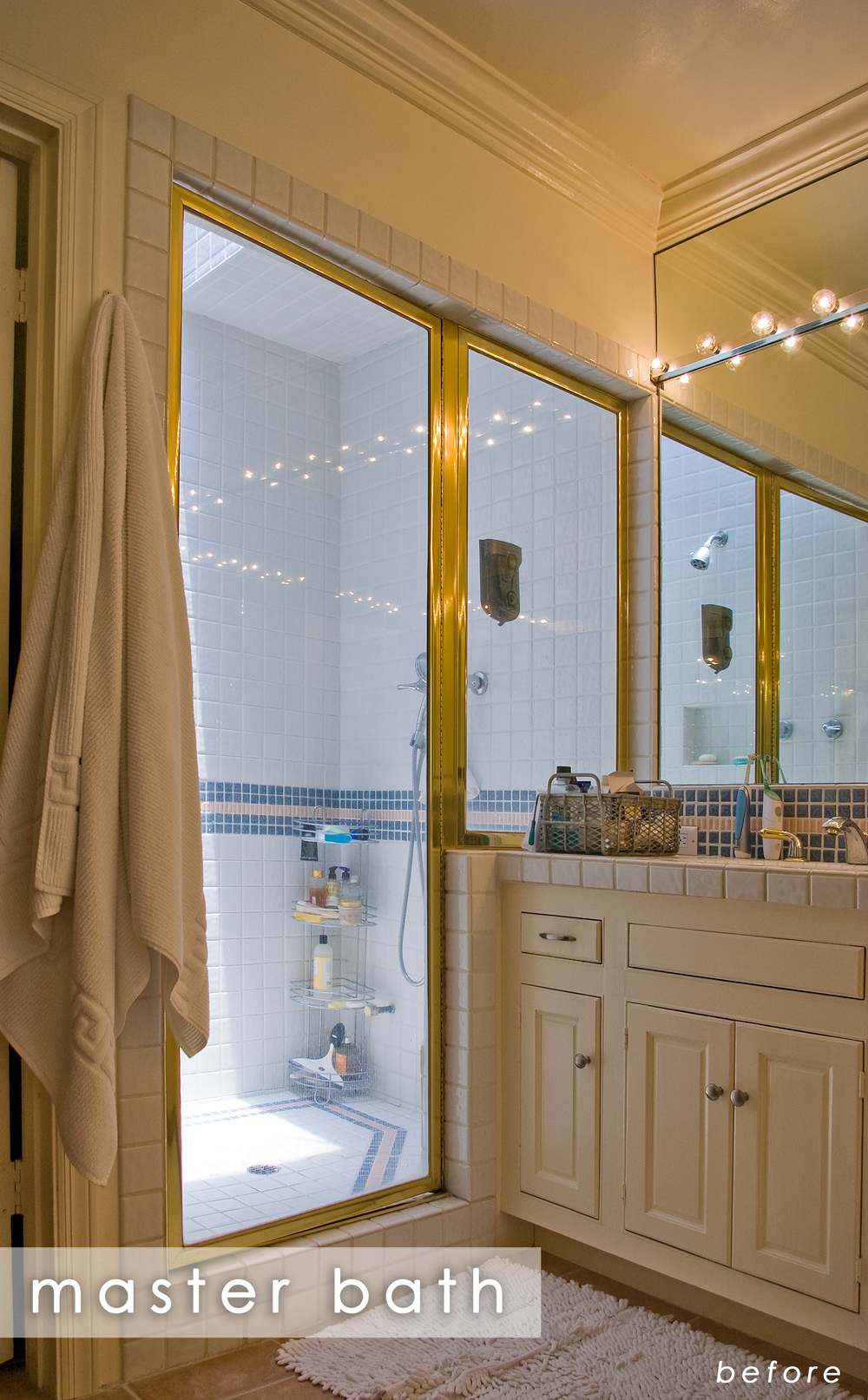 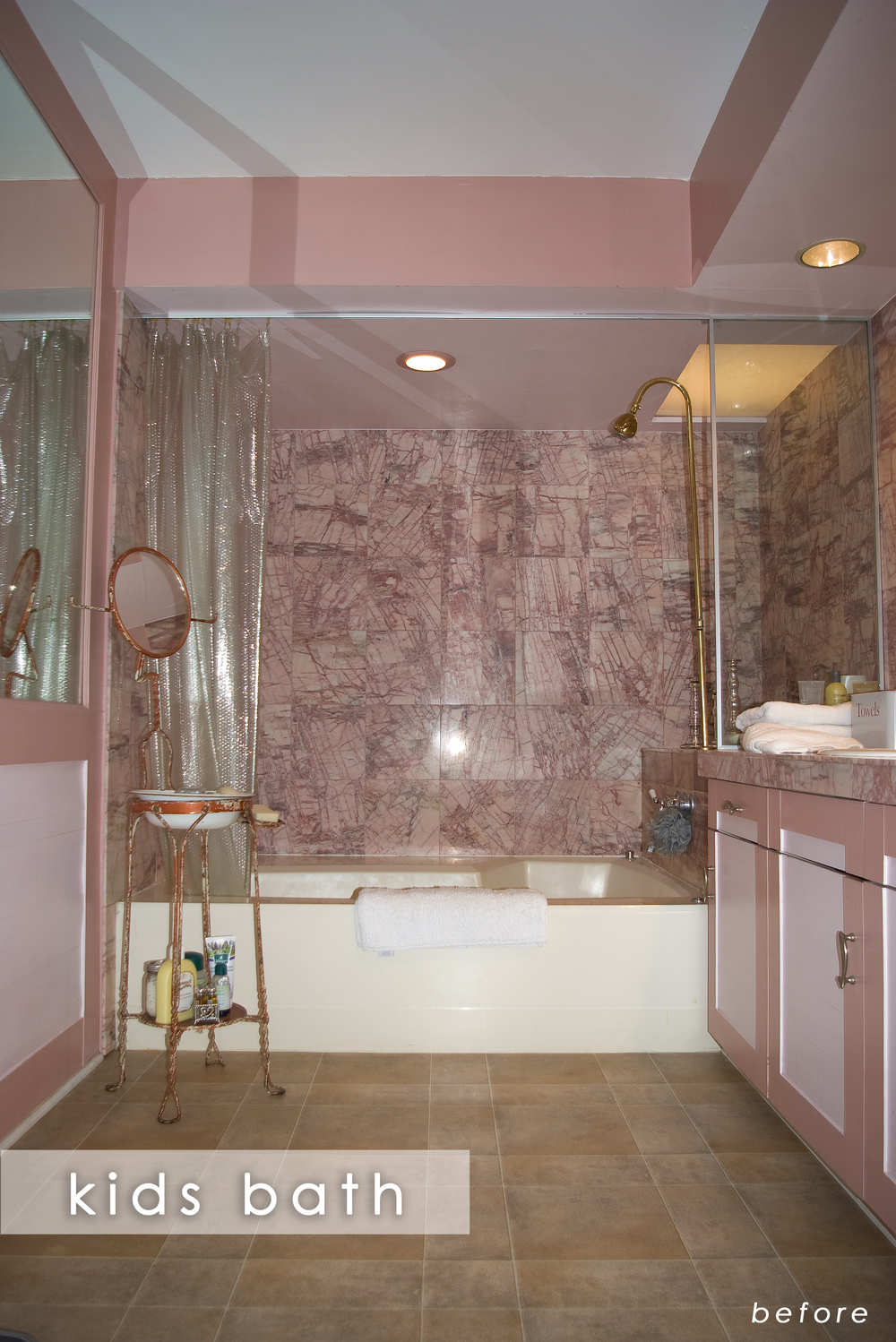 Beth & her husband, Aaron, decided to buy the house despite the bathrooms; they loved it so much. However, it was their intention to completely renovate the bathrooms ASAP–and this is where I come in. We had already arranged it so that my dad, a licensed tile contractor, and someone who has been in the business for 3o years (and who learned the trade from his father, who in turn learned if from his father, who brought it over as the family trade from Italy), would be doing the tile installation. Because Beth and Aaron were still living in Austin, they asked me to design the bathrooms and act as an in-between during the weeks that construction was happening and they were still in Austin. And, of course I had to say yes, even though I knew it would be a ton of work and it would mean delaying my kitchen project, my blog redesign and opening my online invitation shop! But it has proven to be a fantastic opportunity to find out more about construction and interior design, and see what I can do! Also, it’s always been a dream of mine to work on a project with my father… one rather very disappointing aspect of not owning a home is that I haven’t had this opportunity yet. But now, even if I never own a place, I will have satisfied this dream! :)

I’ve noticed that I feel incredibly comfortable doing this project; there has been no uncertainty or nervousness that you might expect will heading up such a large project for someone else. I’m sure that has a lot to do with working alongside my own father and a family friend who is the general contractor, and having my client be my best friend, but this whole thing has made me wonder about actually getting licensed and doing this professionally. Of course, I’ve been saying that for a while; I still don’t know exactly what I want to get into, I want to do it ALL! Hee. ^_^;

The demos are done in these rooms, and we’ve also torn down the wall between the family room and the office, which opened up the space considerably. We hit a few snags, as this house has been added onto a number of times, and we ended up working with two walls  that were formally exterior walls! But, nothing that leaving a post or flipping a beam didn’t fix! Stay tuned for full details on design ideas and materials and some in progress photos! :)

categories / Projects + DIY
Tags / Before + After, Beth Albrecht, wip
Warning: count(): Parameter must be an array or an object that implements Countable in /nfs/c04/h06/mnt/59434/domains/visualvocabularie.com/html/wp-includes/class-wp-comment-query.php on line 405


3 Responses to A Tale of Two Bathrooms