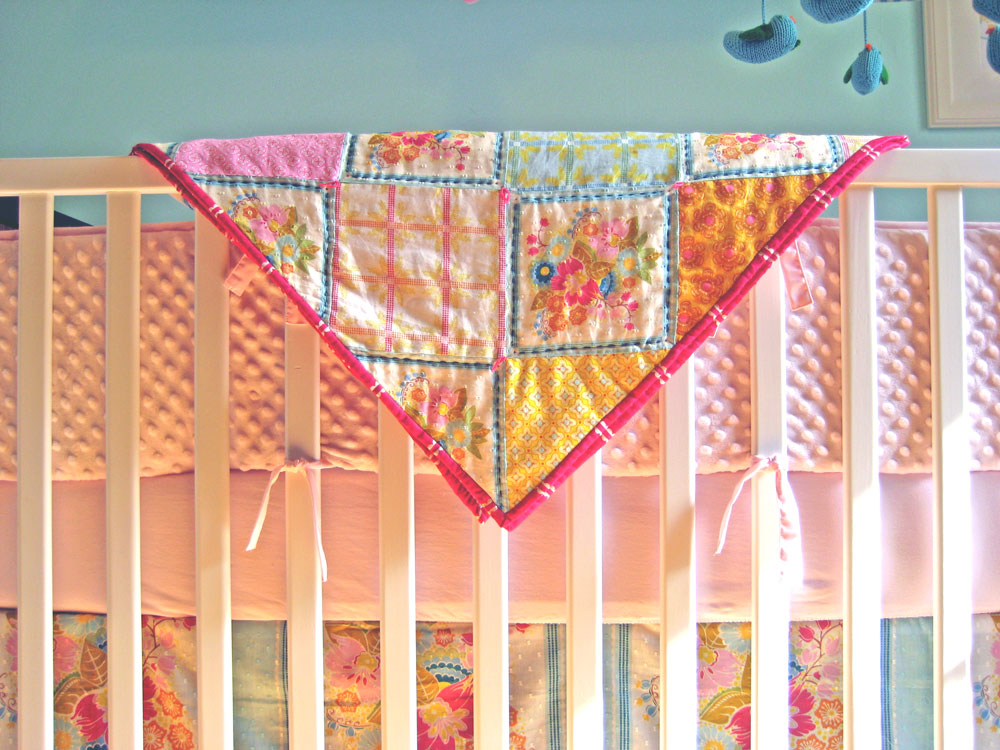 I finished the quilt about a week ago. I have been debating on whether or not to quilt the alternate squares, but I’ve decided against it for now. I’m very pleased with how it turned out! My original idea when I thought about how I was going to design the nursery was to create my own prints and have them made on Spoonflower. Then I saw Anna Maria’s Square Dance in blue and I fell in love. It was exactly the sort of sweet I was wanting for the nursery, in the exact colors. When I considered that this would cost me less money per yard, my mind was set. 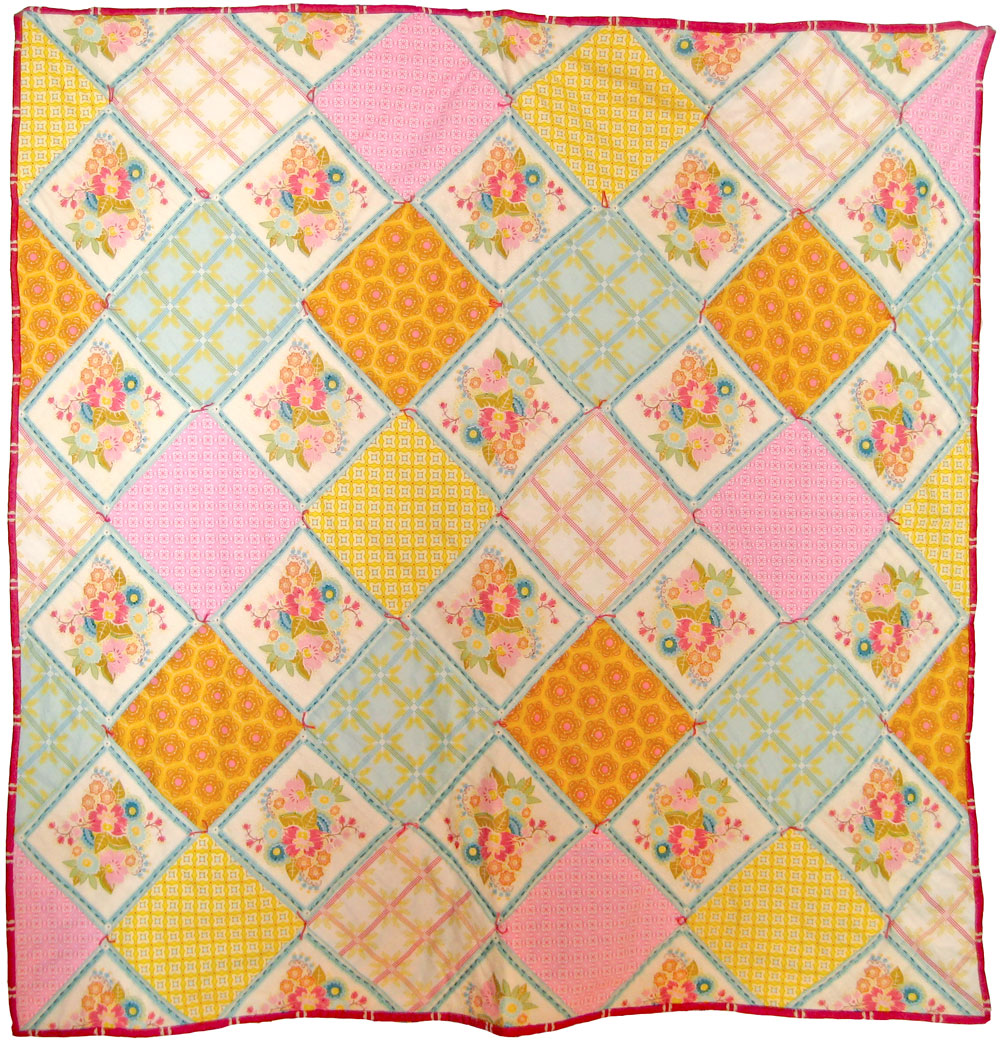 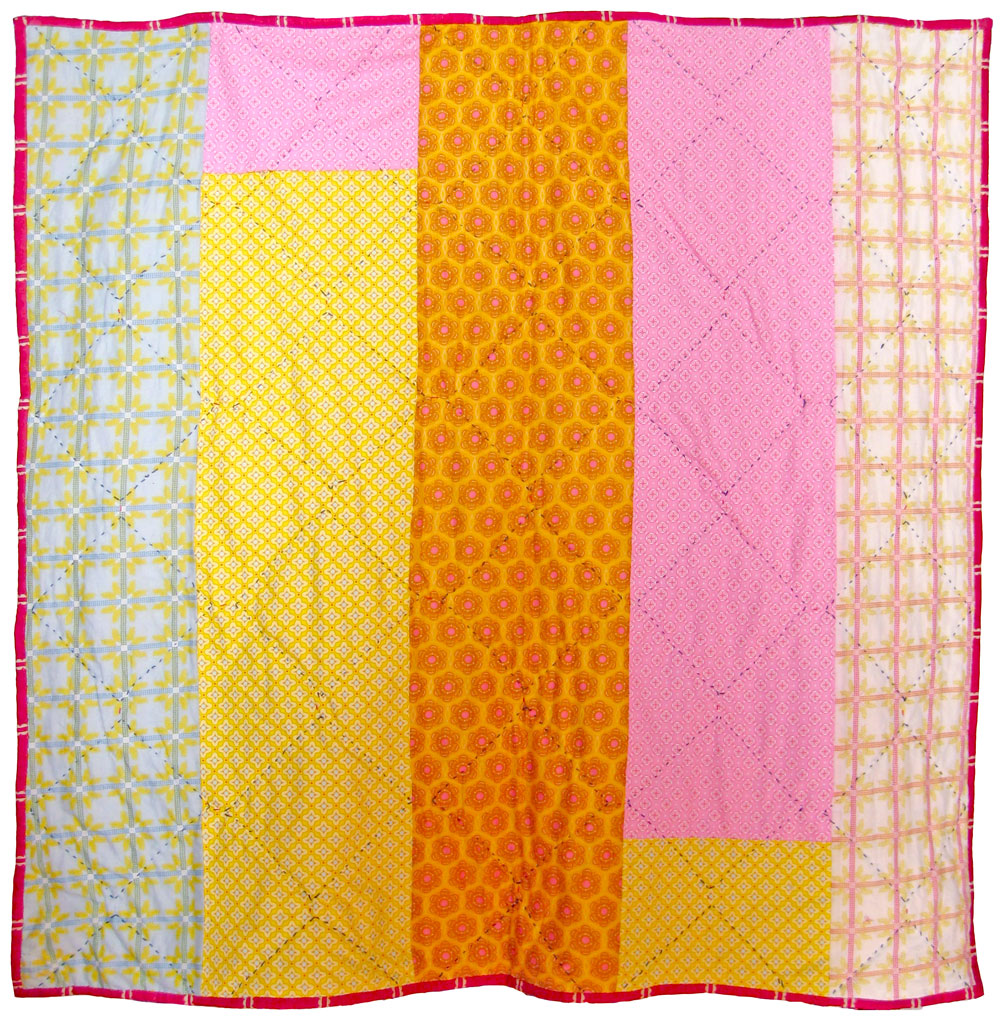 The back of the quilt

Now, remember I’ve never made a quilt before. I didn’t even know what batting looks like! Well, mainly I didn’t know how it was packaged, but still… I’m typically a quick learner, so I wasn’t intimidated. I didn’t use a pattern really, but the quilt was originally inspired again by Anna Maria (if you haven’t figured it out by now, she’s pretty much the closest thing I have to an idol. Do yourself a favor and go check out her blog, and drool over her beautiful creations, her adorable children, and buy yourself something pretty). She made a patchwork coverlet of the prints from her little folks voile series, and although the pattern is very simple, its beauty lies in its very simplicity (and not to mention, it’s very doable for a newbie like myself!). The Square Dance squares set the tone and the pattern, and the act of putting the squares at a 45° angle to the edge makes it dynamic and it becomes much more interesting than your standard patchwork quilt full of right angles. 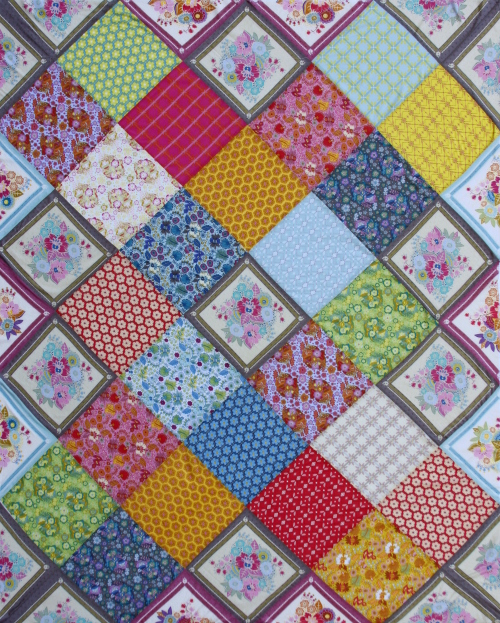 The above quilt utilizes the larger squares from the Square Dance panel, but I thought the small squares worked perfect for a baby quilt. I played around dropping prints in and out of squares to come up with a print combination I thought really worked together. This was actually a bit more difficult than I originally guessed. I found myself being very particular about which complimentary prints I was using; the original 5 prints I was thinking didn’t work as well as I wanted, and I ended up with 5 totally different and new prints. I was choosing prints that were too bold and large scale at first, and there was pretty much no pink (gasp!). I really needed there to be some pink to make it more baby girl. It was the hardest, last, and least favorite print I chose, but it works. You’d think, with the multitude of pink prints out there I’d find something I like more! It was really just hard to find a good geometric print, and that’s what I needed. It’s also the only print I didn’t buy online (I needed it NAO!), but in a quilt store in Thousand Oaks, where my parents live. There are very few quilt stores in Los Angeles, believe it or not! And even fewer that actually carry modern designer prints. I usually drive down to Michael Levine, but parking can be a pain, they never have full stock of a designer… and of course, I’m still out a car until the hubs gets a replacement.  I have half a mind to open my own shop!