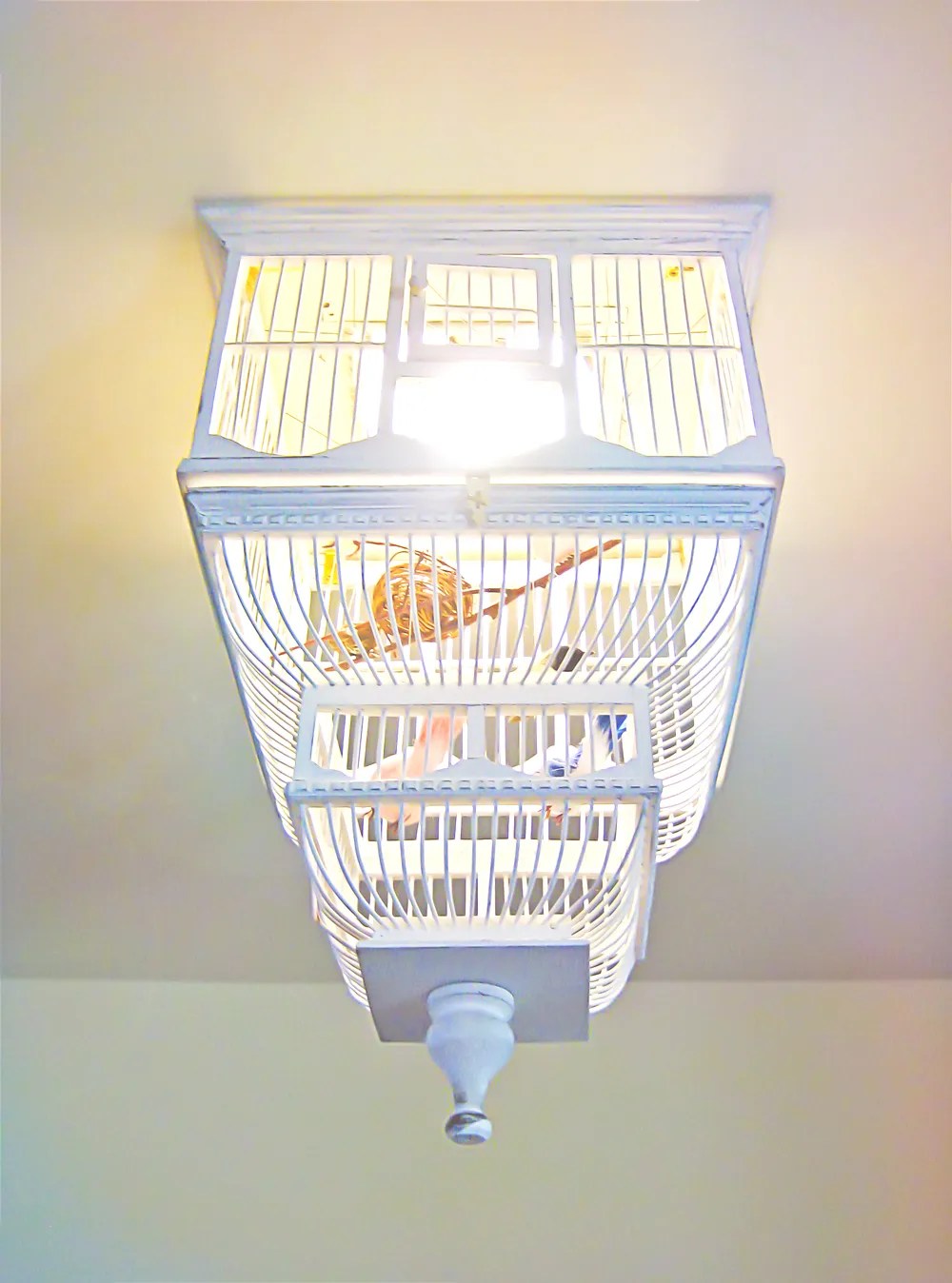 Alright! Here it is , the birdcage-turned-upside-down-turned-faux-chandelier. :) This birdcage has a bit of history (if you just want to know how I made it, skip down a few paragraphs!). Originally used in the babystyle spring 2008 photo-shoot, it was bequeathed to me by the photo stylist for use at my wedding. I asked her where she got it, and she said she got it for dirt cheap from Pier 1, and that I should just take it before the babystyle ship went under in a firey rage. (At the time I thought maybe that was a bit dramatic, but clearly my naiveté was showing; I think our last day wasn’t even a month after this conversation).  I brought it home, and at a loss of where to put it, I think it sat on our kitchen table for a few months. This thing is LARGE, and as such, became a bit of a conversation piece when friends and family came over. My cousin coined the phrase “Hey Jess, what’s with the birdcage?!”. I always had to fumble a response about the wedding, because I wasn’t even sure how we were going to use it! We ended up using it to display the name cards, which I thought worked out great. Here are some photos of it at our wedding: 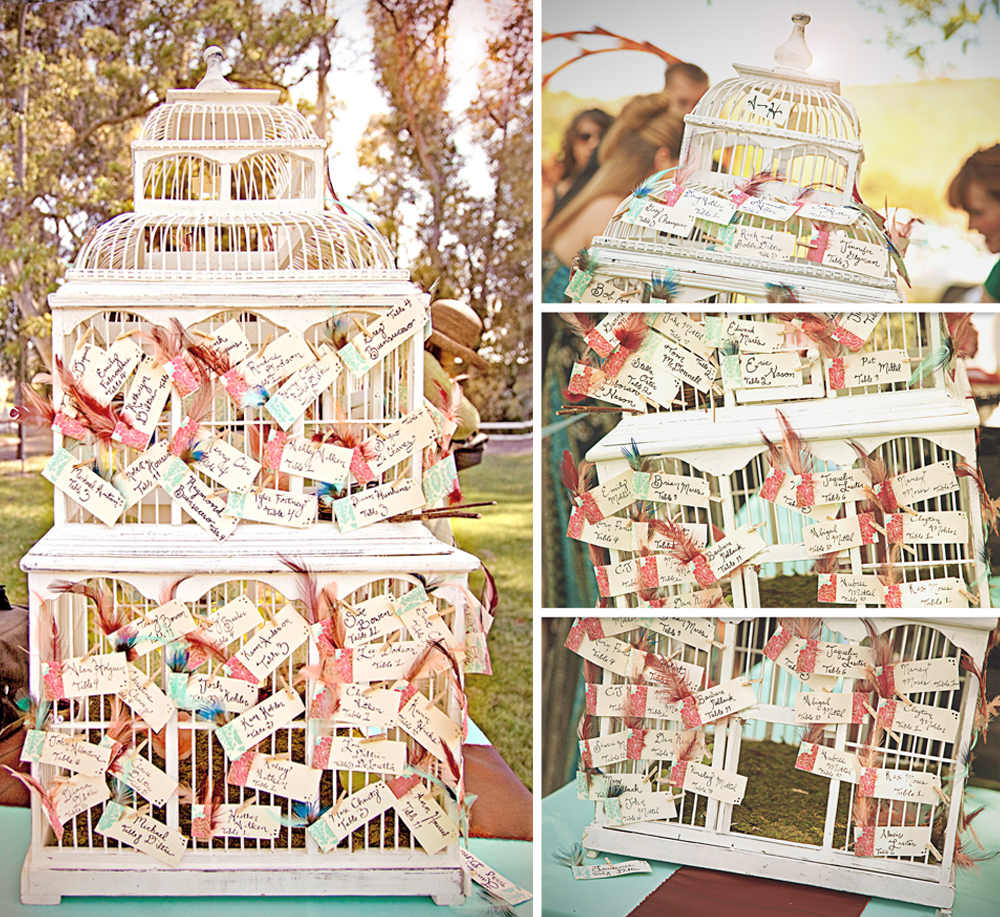 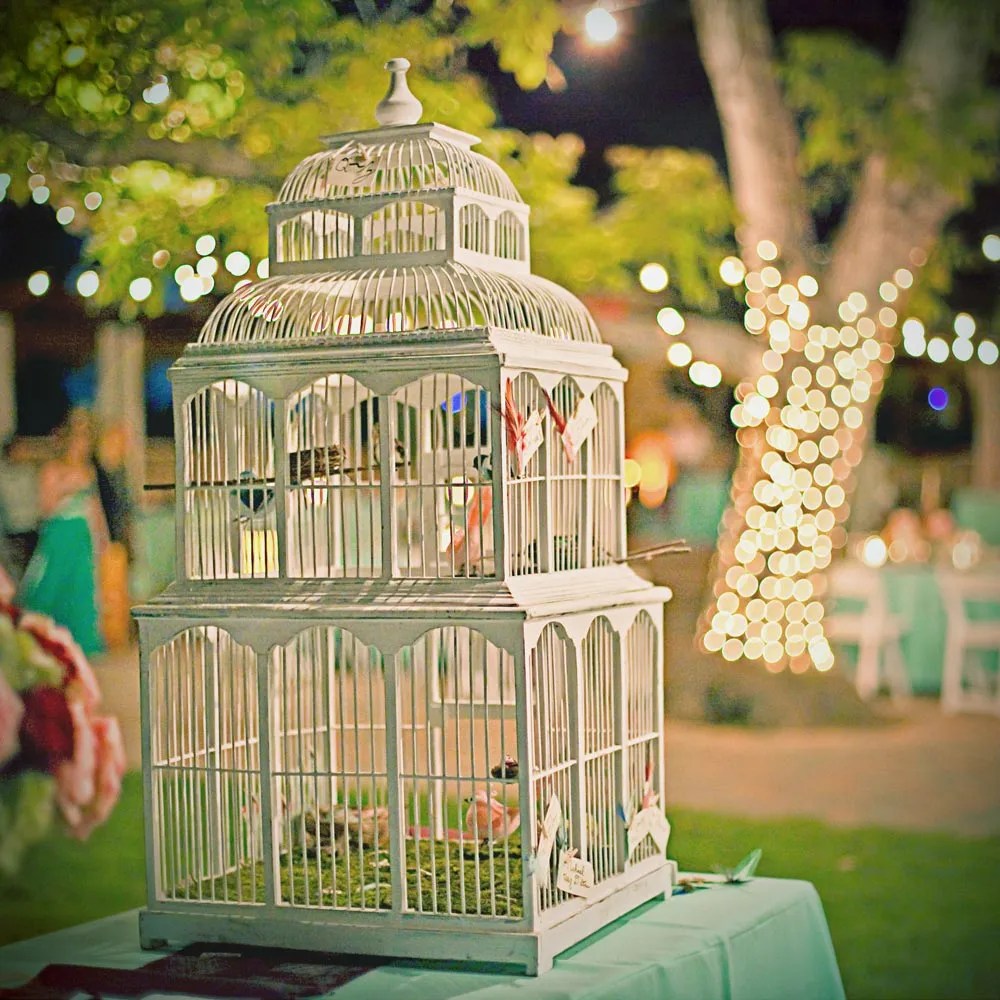 (On a side note, after my hard drive crashed in October, I lost all of the edited photos from my wedding; I just had to re-edit all of these! It’s a lot of work, but I think I have learned so much that I’ll be happier with my final product in the end! I want to FINALLY have an album by our 2nd anniversary next month! I’ll probably do a little post here.)

So the wedding came and went, and we still had this giant bird cage, and I kept trying to find new locations for it, but it was so large the base wouldn’t even fit on any of the side tables or dressers in the house! Two things came into play before the light bulb moment; 1) I had always liked the songbird chandelier from Anthropologie, and I remember it being some absurd amount of money for something I could make with a good pendant lamp, chicken wire and birds I found at Moskatel’s (it’s owned by Michael’s, but its like a warehouse in DTLA)… Maybe it’s the good pendant lamp you’d be paying for, but regardless it definitely falls in the “make” not the “buy” category for me, so this was on my “to make list” 2) when we moved in to our place the only light in the living room was missing a fixture, even after occasionally bugging our landlord about it for a year and a half. One day in December 2009, I was sitting pregnant on my couch playing video games thinking about what to do with this thing… I thought about how a lot of other birdcages just hang from the ceiling and then it hit me! Just turn the stupid thing upside down, buy some hardware, and stick it over that hideous exposed light that is missing a fixture.

I only used the top two tiers to make the chandelier; the bottom part wouldn’t work, as it would have made the fixture hang down too low, and it also is closed off at one end. The additional materials I used were: 4 L bracket, 2 hinges, one hinged latch, floral wire, nylon bead string, beading wire, hot glue, and assorted craft birds, branches and nests (literally everything, except the hooks and the hinges, was wedding leftovers!). First, I attached the four L bracketsto the inside right corner at the bottom of the second tier (which would be the “top” of the chandelier, where it attaches to the ceiling), and we glued floral wire across the top in varying directions to create a base on which to hang the birds from.

Yes, that's a tiny screw holding it shut. I've been meaning to find a replacement!

We needed this thing to open so we attached the hinges to the outside of the top of the second tier of the birdcage; 2 door hinges on the back, and one hinged latch on the front. The hinges are necessary in order to install and take down the chandelier, hang the birds and change a light bulb! 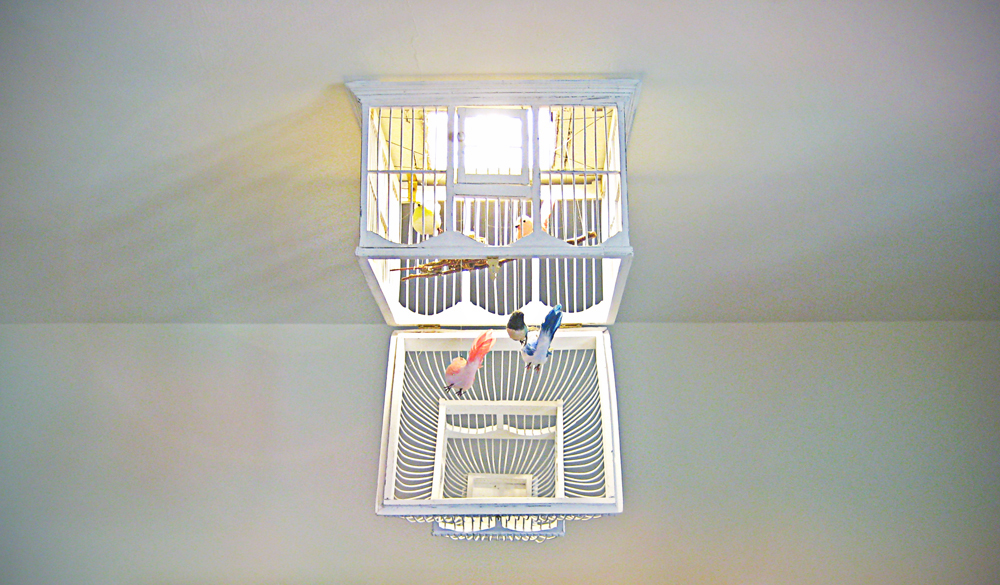 Next I made hooks with my trusty rounded edged needle nose pliers and some floral wire to insert into the back of each bird. I also used a little hot glue for additional support. I made some hooks with an eye closure, and attached the vinyl string from the eye of one hook to the hook attached to the bird.

Once each bird was attached to a string with a hook, we could hang the birds and the branches to the floral wire strung across the top of the birdcage. 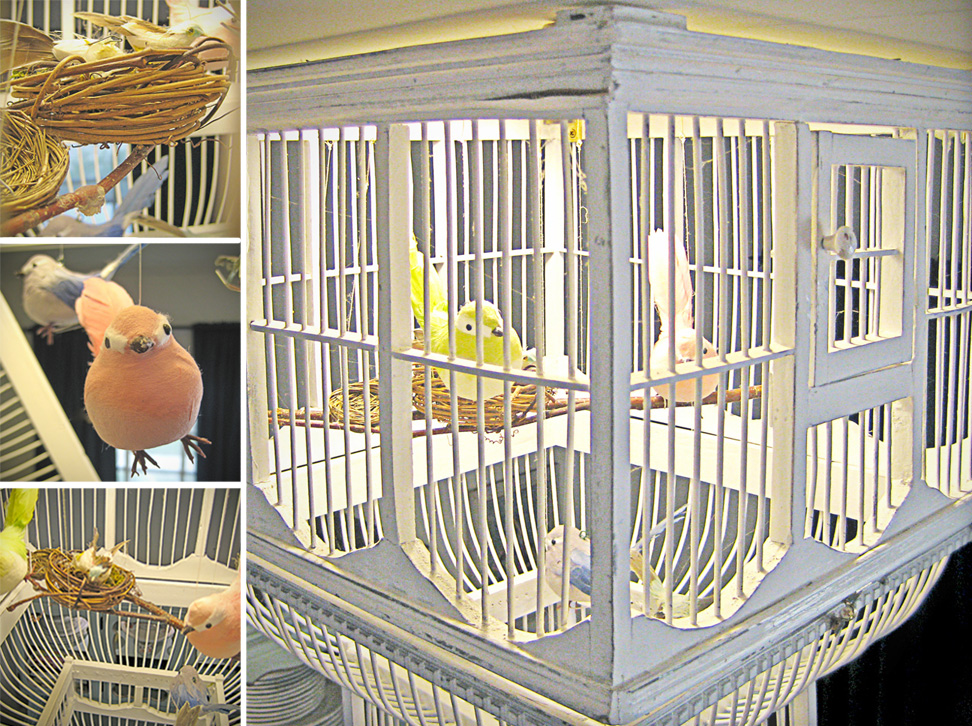 Then we closed the whole contraption by inserting a tiny screw that was left over from the hinge sets into the hinged latch (I keep meaning to do something cute there, but I always forget! Oh! It just hit me, maybe some ribbon…), and stood back to admire our work. 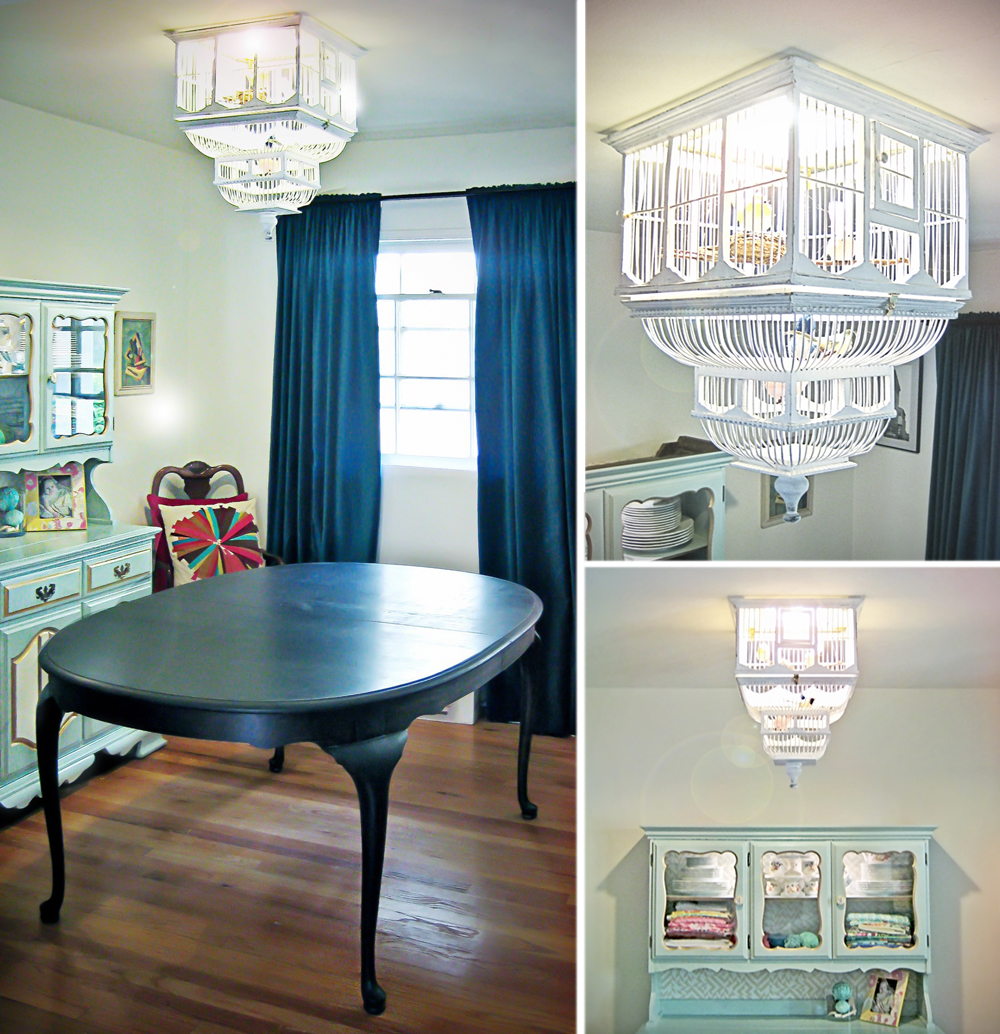 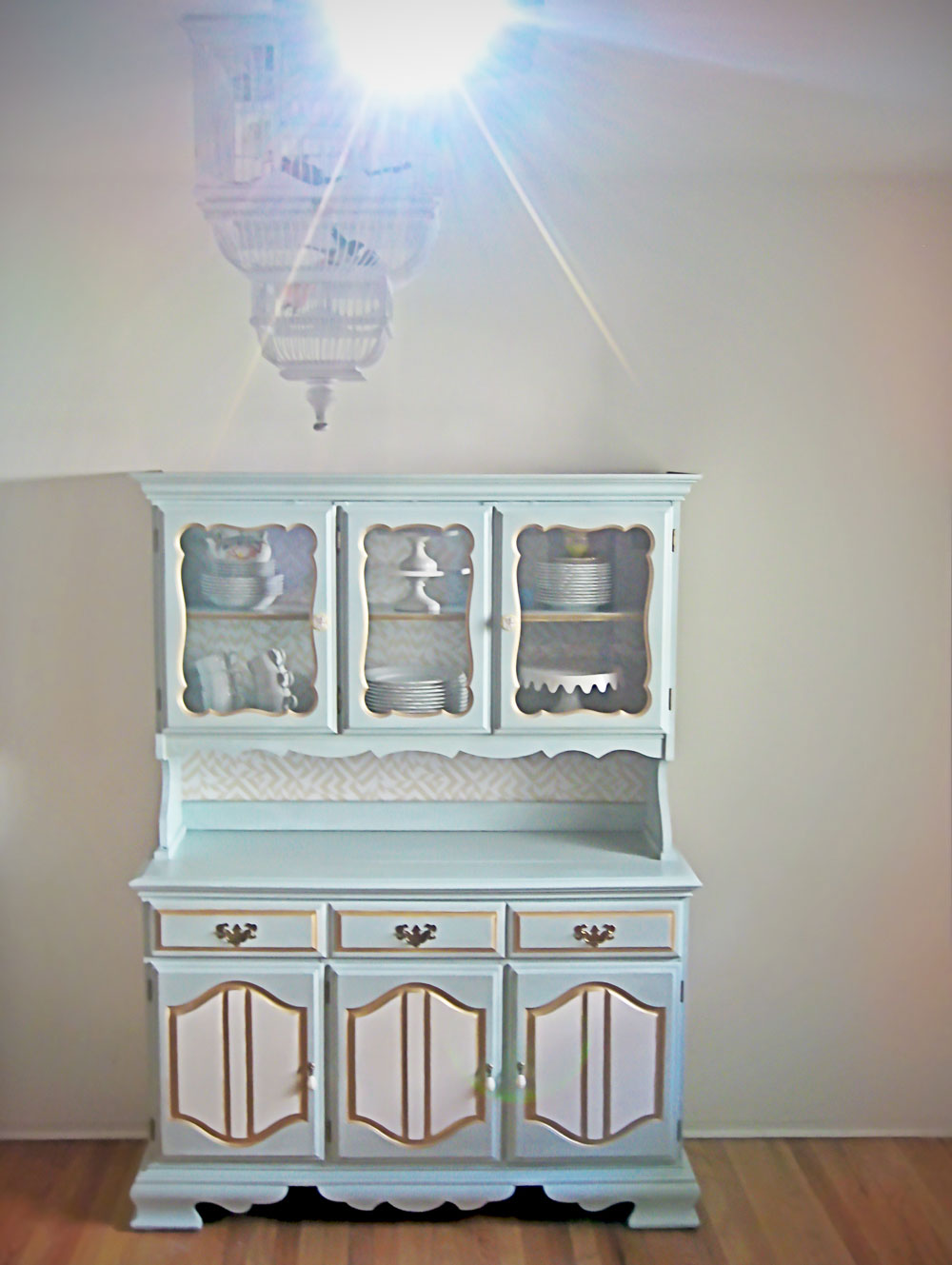 A neat photo of the birdcage and hutch with our projector on.

So whatever happened to the bottom of the birdcage? It finally found a home holding blankets underneath our refurbished highboy in the bedroom. :)

And that’s it for the world’s longest blog post, lol. I think I might have to officially retire this camera with a broken focus…. If I have to try to salvage any more blurry photos, my head might explode!