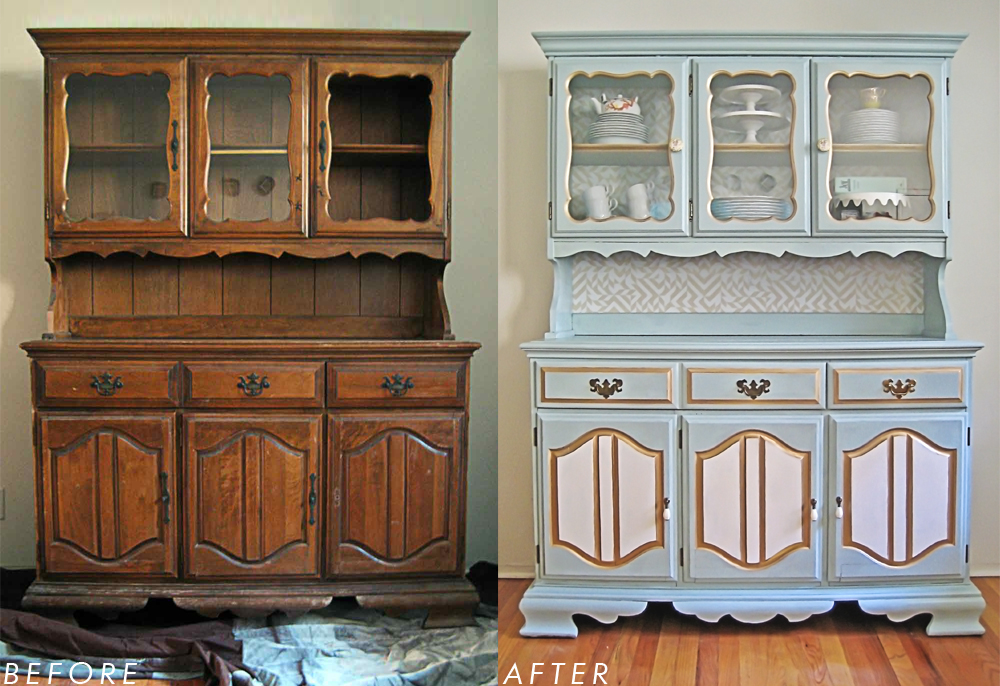 After a lot of hard work and a few moments of indecision, I finally finished the hutch late last week!  This piece needed a lot of work, and I probably could have spent a lot more time stripping and sanding, but as I knew it was going to take a few days, and we were due for rain, this had to be an inside project and I couldn’t spend days sanding and striping (and potentially ruining our floors). Just look at that peeling varnish!

I took the door with the missing window to a glass shop, and started hunting down hardware. Some of it I knew I could salvage, and some I knew I would have to toss. I had (and still have) my heart set on anthropologie’s color swatch knob, but it seems to be completely sold out! (The bottom shelf of the hutch will house my fabric, and I always thought those knobs would pull the colors of the fabric so well… :). I decided to get a move on with the things I knew I was going to go with; turning that center window that was drilled shut into an operating door with a hing and a magnetic closure, and installing the lights. I went to Lowe’s and bought some furniture door hinges and a closure. They had to be the kind that you could attach to the outside so I could have the door centered over the opening just right. Just drill, drill and drill, easy peasy! Now we have a functioning door. 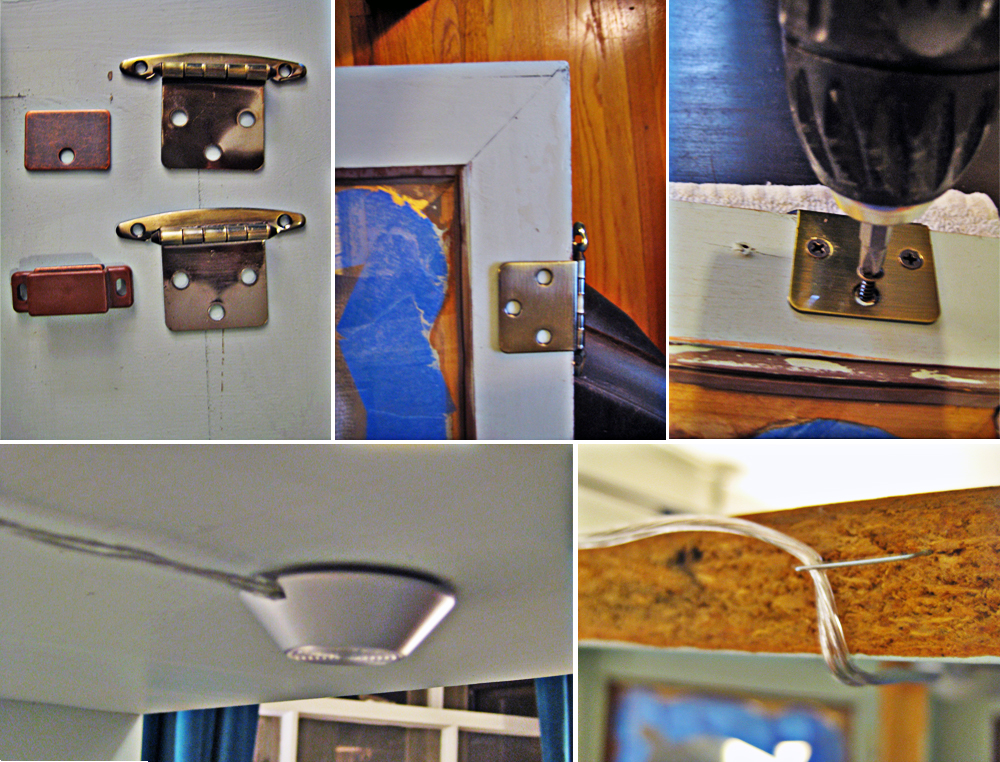 Attaching the interior lights and the hardware to turn the window into a door.

I went to IKEA and bought some LACK spotlights and installed them above the top shelf. I actually bought 2 sets as I intended to light both shelves, but one set was making a strange buzzing noise and we decided they need to be returned. I decided not to drill through the top of the hutch for the time being… I figured the wires are so thin it won’t be so noticeable. We’ll see if it drives me nuts or not!

I’m kinda really into shelf liner paper. I’m very specific about the way it accents the furniture that I makeover… I love the surprise when you open a drawer or a cabinet! It just helps everything to feel more put together. I found this awesome Con-Tact shelf liner on ebay for $2.99 a roll! A pretty gold and white, almost chevron print, but not quite, which makes me love it more for some reason… It was an instinct purchase, and when I was having trouble picking a fabric for the back, my husband said “I thought that was what the Con-Tact paper was for”, and I immediately was like “No!!! It’s for the drawers!”; but then, nothing else seemed to work quite as well as this, especially since I knew how busy it was going to look with the fabric in it, I was really leaning towards a two color print. It was such an easy fix, and SO CHEAP! I ended up using all three rolls, but it was worth it. :) 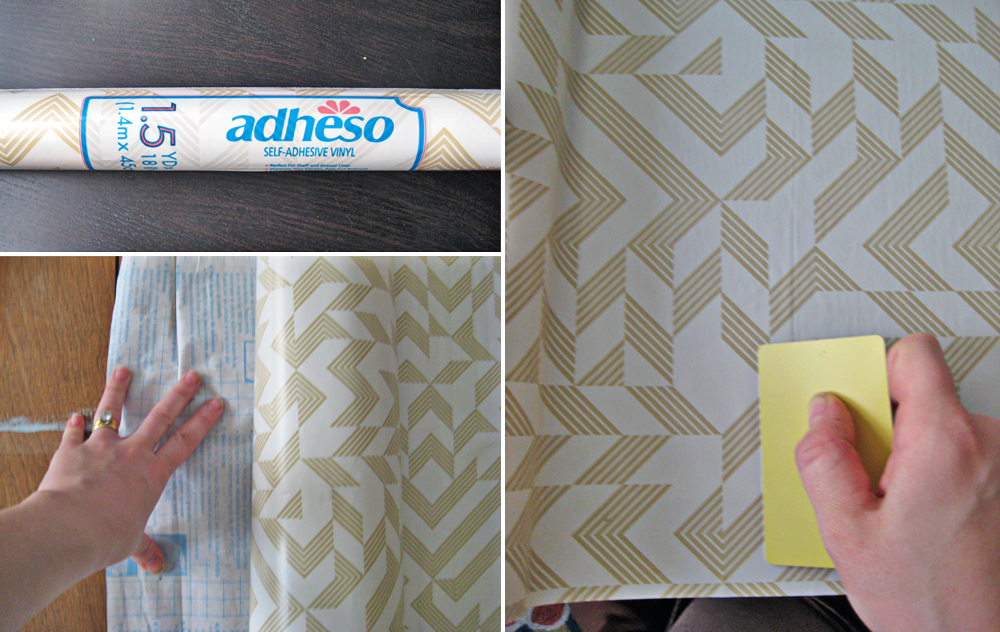 Pretty gold and white Con-Tact paper. Awesome eBay score! Also, always use a credit card to help you smooth the paper along the way!

At first I really did think I was going to paint it black w/ the ebony stain, and the turquoise interior, but I really fell for all of those light hutches with the wallpaper backings… And while I didn’t want to paint it black, I also didn’t want to paint it white, so I ended up mixing the bit of paint I had left over from the office/nursery with the paint we used in our bedroom, and a little off white, which made this color. The gold accents (I used model paint!) seemed to come organically, perhaps inspired by the existing antique brass hardware, but I’m sure it was also influenced by the contact paper. I don’t know which idea fueled the other, really. :) 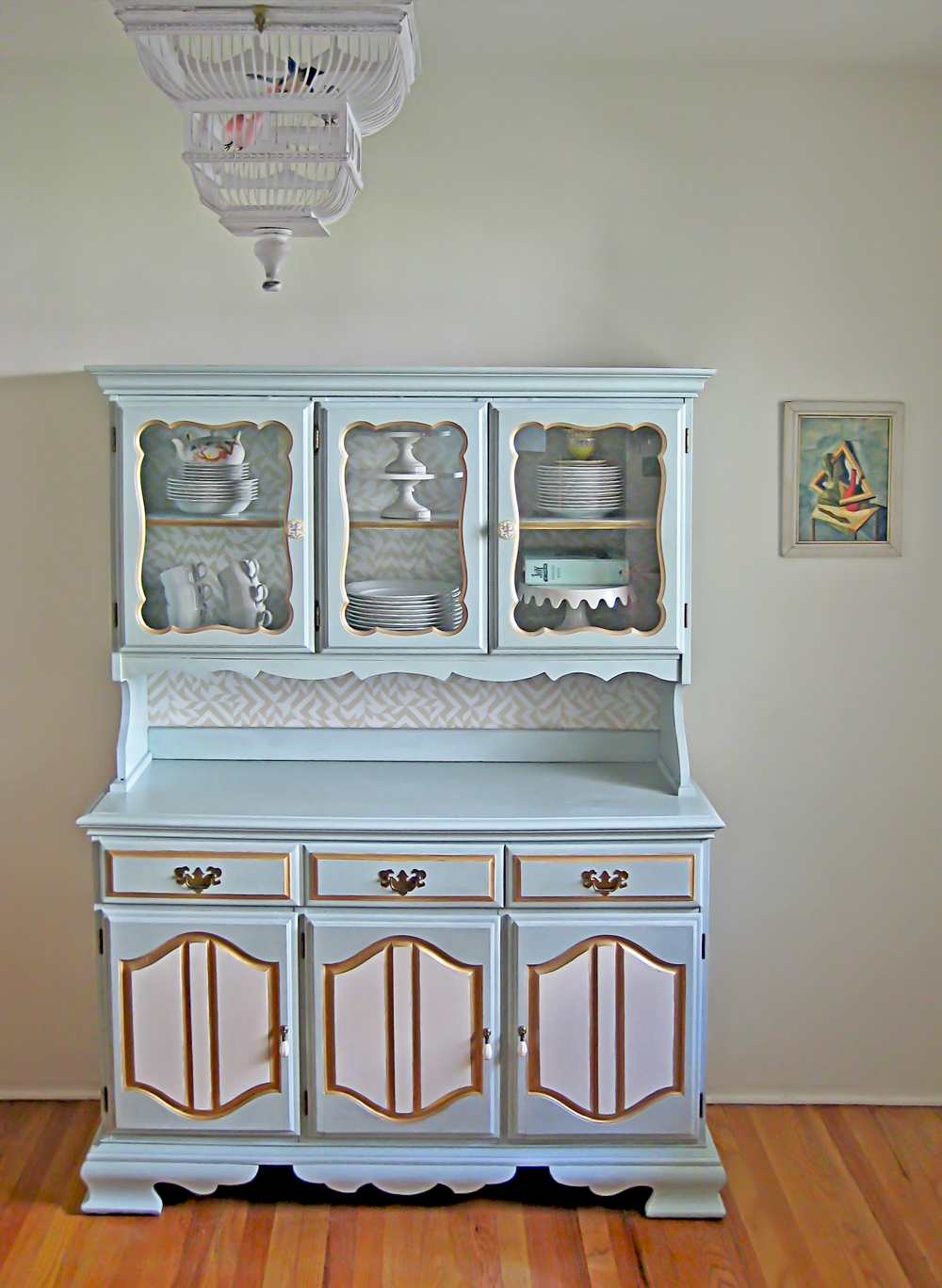 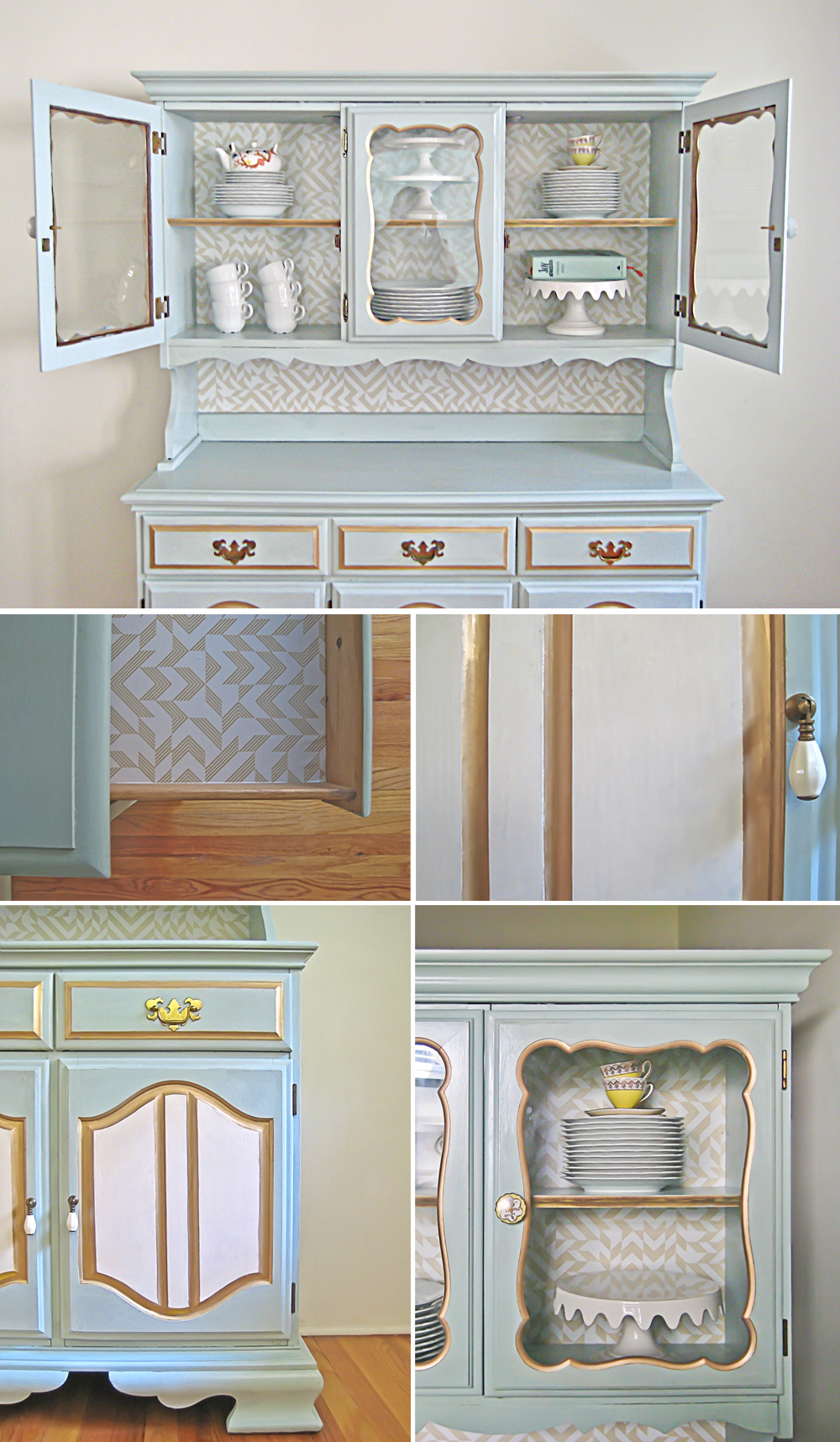 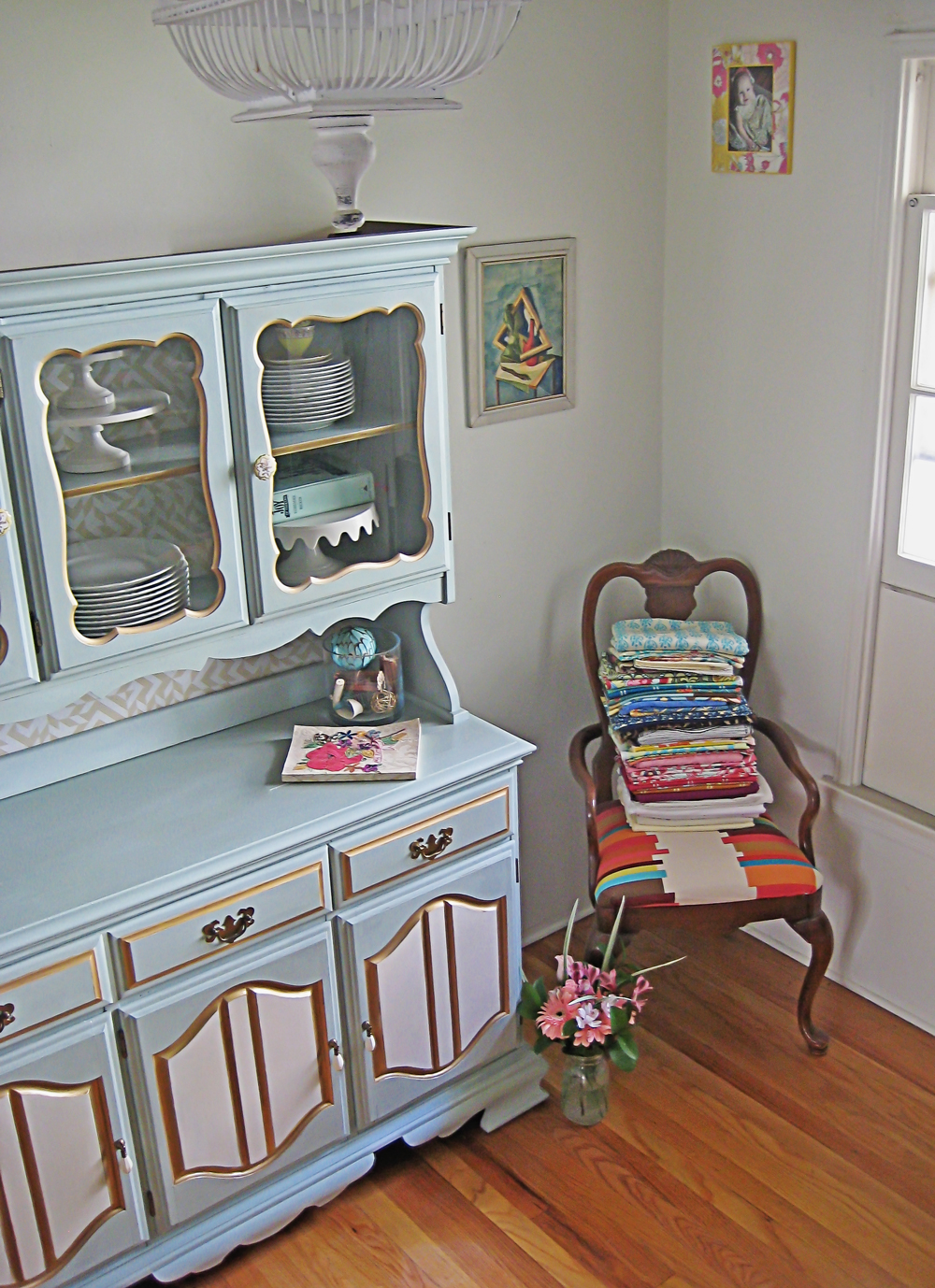 In case you are wondering if that is an upside down birdcage attached to a ceiling, you are right; that is an upside down birdcage-turned chandelier. Maybe one day I’ll do a quick post about it. :) Anyway, I went with some knobs that were totally on sale at Anthro (and match a pair of teacups I have), but I can’t find the name of them anywhere… I only used two, despite having turned the middle window into a door because; 1) I thought it was more balanced this way, 2) there were only 2 of these knobs left, and 3) I’m still holding out for the color swatch knobs (/shakes fist!!!). My only regret is not installing a push-open magnetic closure on that middle door so it would be easier to open. Put that on the to-do list! The  cabinet pulls I used were the new ripe melon pulls, which I love as they instantly remind me of the Edland furniture set I love from IKEA, and I’m sure something else that I can’t think  of right now which is what probably inspired IKEA’s designer to use them in the first place. Check out the flickr photostream I have if you’d like to see more photos.