Wow, it’s been over a week since I blogged, and I’m not very happy about that! I get cranky when I don’t blog, I think I start to feel suffocated or something. I’ve been really busy lately; for some reason, I know a plethora of people born around this time of year, and starting from my daughter’s birthday to after our anniversary in two weeks, we haven’t had a free weekend day. We also had visits from my sister and her family, and my husband’s brother and his family… meanwhile, Visual Vocabulary has been featured in small areas about the web, and I’d like to document it. :)

First, the hutch makeover was featured in Craftzine’s flickr pool weekly round up on April 17, which was cool and unexpected. I was actually unaware of this round up before I added the photo to the flickr group! 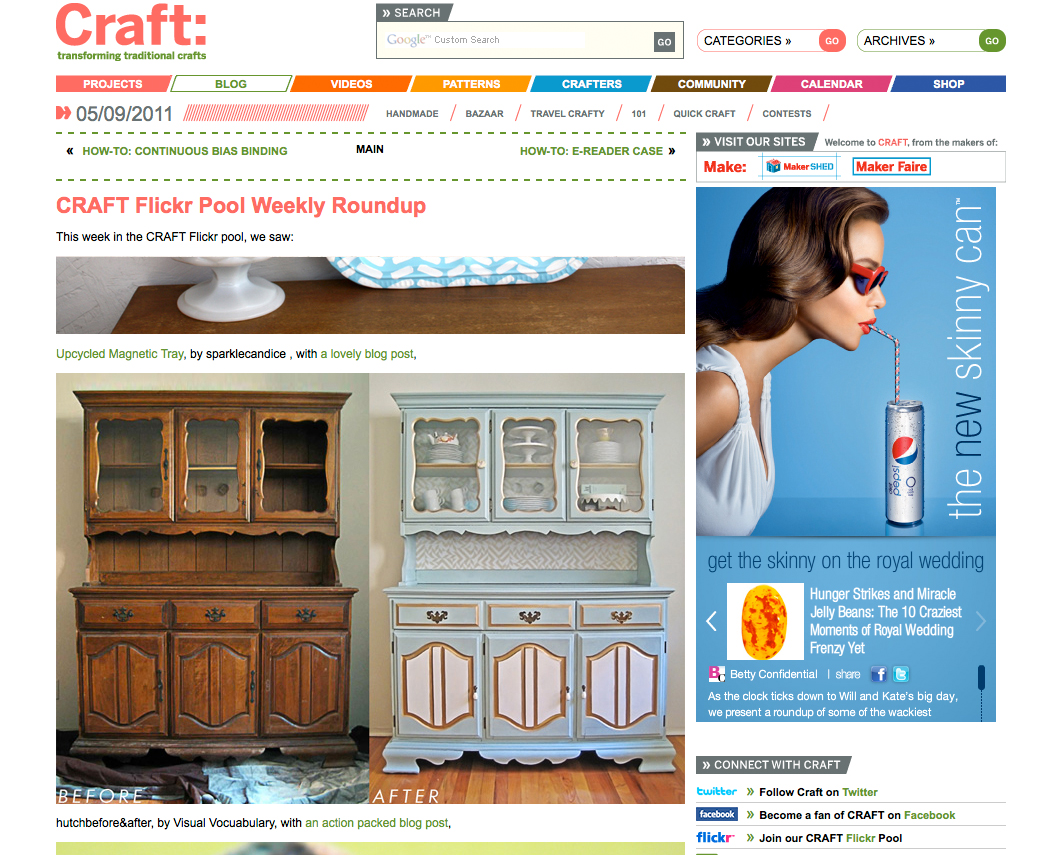 Second, Laelia’s first birthday board was not exactly featured, but it was shown on Ashely Ann photography’s blog under the sycamore. She is also a monthly DIY contributor at Design*Sponge. Her sweet daughter was couped up in the hospital for weeks after a very serious leg break, and she found Laelia’s board to be a “perfect jumping off point” for a bracelet making party for craft hope. She found it via pinterest, which has actually been sending a bit of traffic over this way, more than I ever expected! 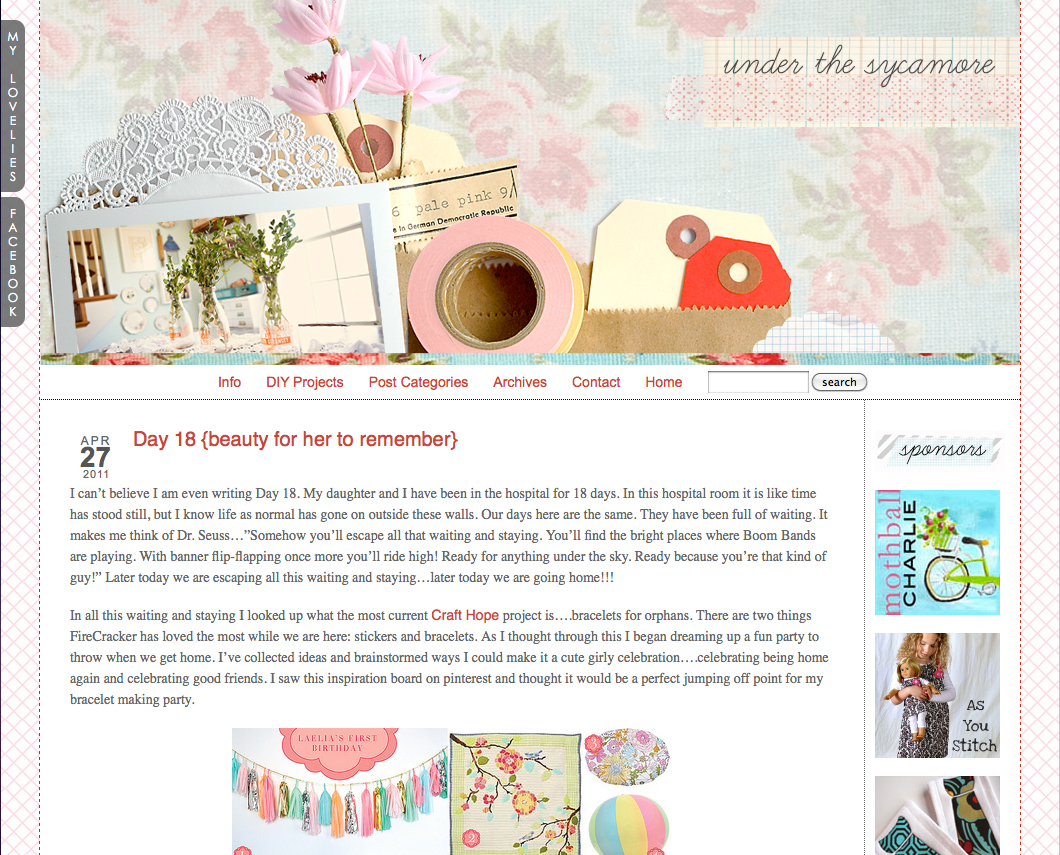 Third, the pinwheel tutorial was featured as a last minute DIY mother’s day gift! So cute, and I was also very surprised to find ReadyMade as a referring site on google analytics, lol. Honestly, all of this really illuminates how much I want my new blog design to be finished! It’s almost done, but the hubs is having difficulty finding time to work on the coding (gee, I wonder why, I haven’t even had time to blog!). 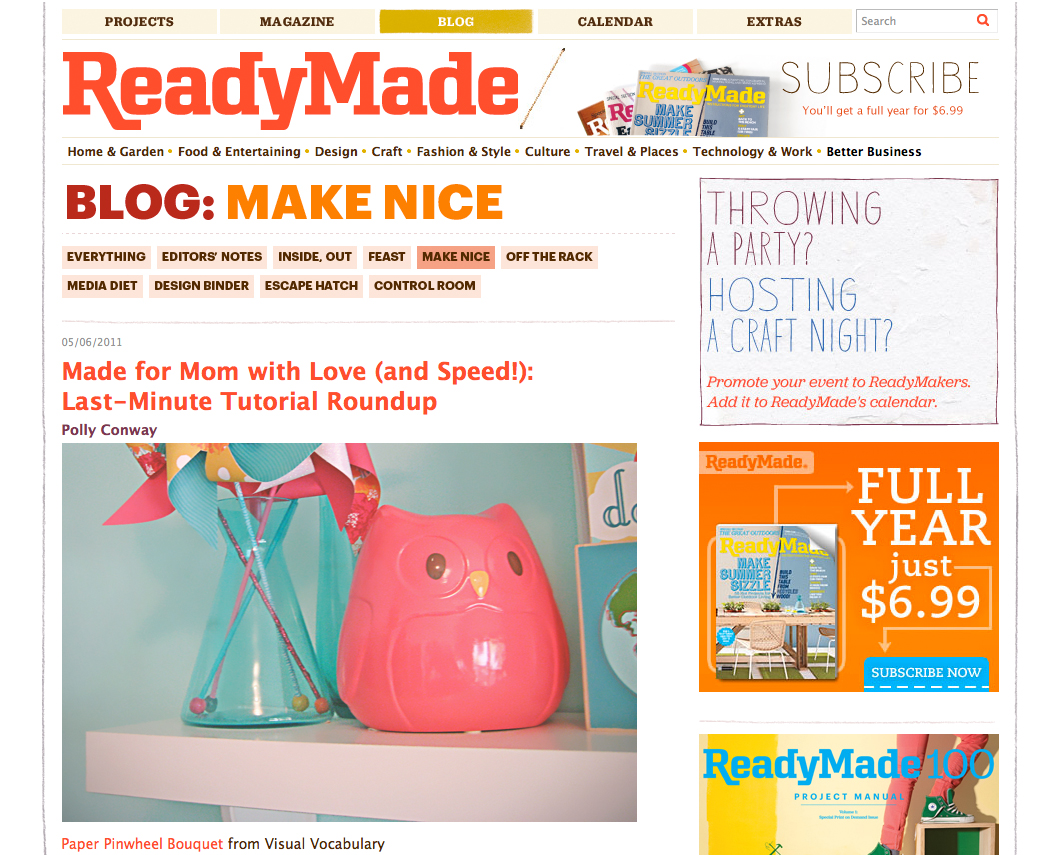 These little featurettes make me smile, even when I can’t blog. I do intend to do 2 of Laelia’s outfits, because I missed one last week, but for now I need to go sew,  I need to make a linesheet and dig up some old tech packs, write a few emails, and clean.this.house. (!) xoxo

categories / Blogging + Elsewhere
Tags /
Warning: count(): Parameter must be an array or an object that implements Countable in /nfs/c04/h06/mnt/59434/domains/visualvocabularie.com/html/wp-includes/class-wp-comment-query.php on line 405