I know I haven’t revealed my new living + workspace yet (because it’s not done!), but along the way, I’ve decided to give my hallway a lift too. I always had vague plans for it; I want to put up wedding and family photos with a little artwork and a nice mirror, and I thought about getting a small flush mount chandelier, but as I still have yet to go through all of my family + wedding photos, I have never really been terribly motivated to do anything about our completely drab and increasingly neglected hallway. That was until a few months ago and I kept seeing all of these beautiful dark walls all over the place… suddenly I knew exactly what I was going to do. 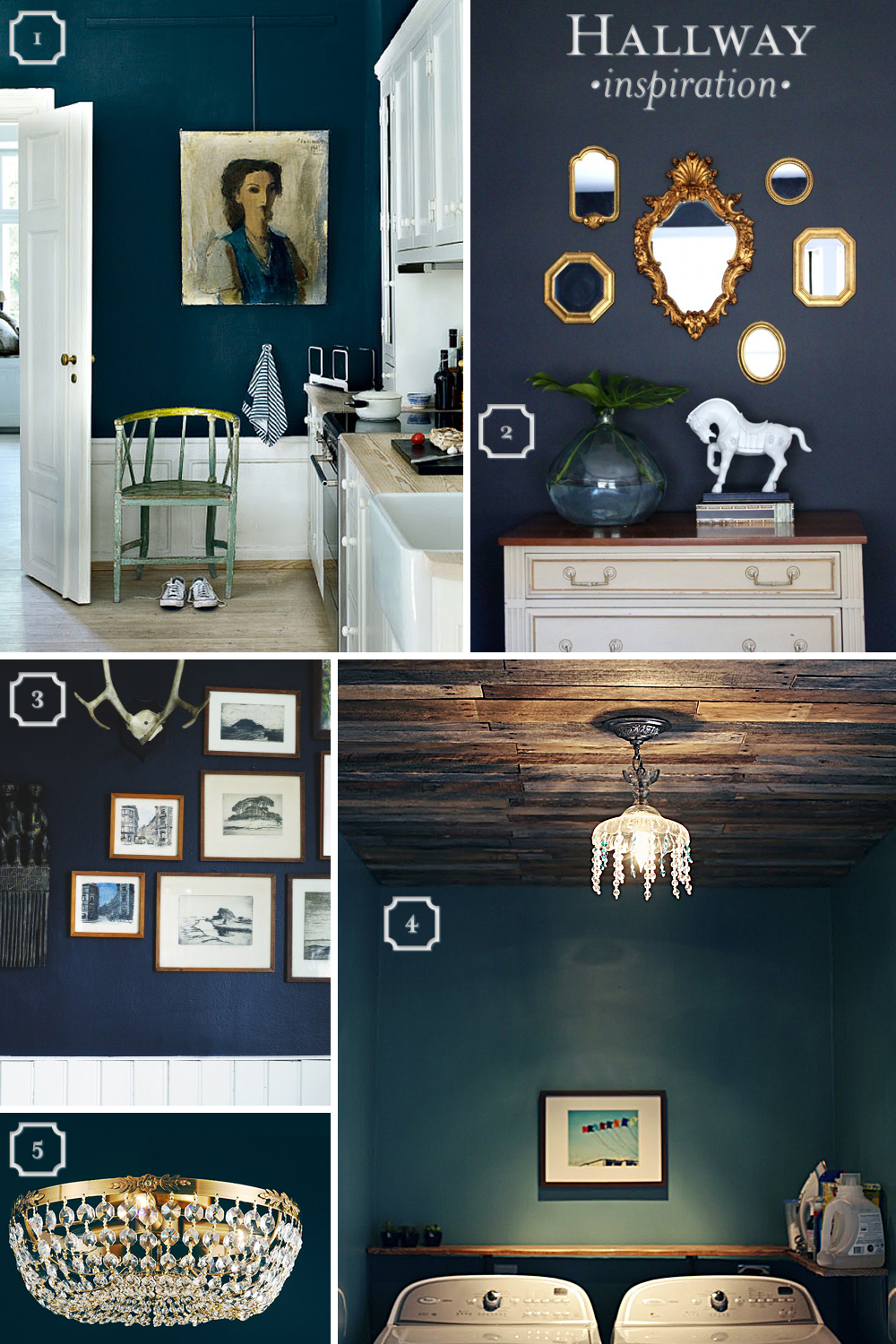 1) Dark walls + “low” chair rail – I realized that my hallway is the perfect place to have the drama of dark walls. You can see the hallway from all the other rooms in the house, and it would bring a lot of life to such a small space. What’s even more exciting is that my dad had some extra moulding lying around that was leftover from a friend’s project, and he offered it to us when I mentioned that we needed some moulding to make a frame for our projector screen. When we had the frame for the projector screen cut (more on that another day), there was enough left over for the breakfast nook (more on this another day too!), AND there was enough left over for the hallway! So, I get to make an ancient dream of mine happen, and that is to live in a house with moulding! Also, I’m really excited that it was free and we get to learn about installing moulding which will be a valuable experience for us, I’m sure. We are also installing it lower to the ground than you usually see chair rails, but my gut was telling me I should install it lower. After I read this article, I had the assurance I needed to move forward with this idea. Essentially, higher chair rails tend to make a room look squat and short, and since I long for–but don’t have–14 foot ceilings, I don’t want to make my rooms look any shorter than they already do…
(image source: This was perhaps the single most inspiring thing I saw in regards to my hallway, and it is frustrating that I can’t find the original source. I found it via pinterest, and it has been pinned via various blogs. The closest I found to the actual source was this blog, which says it was found via livingetc but it just links to the website not the actual page the image was found. :( Pillow-mint also posted it, but doesn’t have the original source either. If anyone has more info, please let me know! )

2) Gold Mirror – We are on the look out for an ornate Hollywood Regency style gold mirror between 20″- 25″ wide. We may just give in and buy this mirror from IKEA and spray paint it, but I want to try my luck getting something more unique.  We may also find a very shallow table or something to put under it, but I’m not going to focus on that idea too much now.
(image source: The Nesting Game found via Design*Sponge)

3) Gallery Walls – I have wanted to do floor to ceiling gallery walls since I was in college! And I still haven’t gotten around to doing it because I always feel like I need to have everything else exactly right before I get around to what needs to be on the walls (I do think I need to let go of this feeling; I hardly have anything up on my walls which is really a shame because I am an artist/graphic designer and my husband draws and his family owns a flippin’ art and framing store!). Obviously I can’t do floor to ceiling frames because of my little, but I certainly can finally get around to finally framing photos and making/selecting artworks and objects to compliment said photos. I just can’t decide if I should do all gold frames (glam/classical), all wood frames (rustic), or all white frames (modern). Maybe I should just do all of them.
(image source: Bolig)

4)  Chandelier – Isn’t this laundry room dreamy? Obviously we can’t do the lovely wood planked ceiling, but I love the way the light from small chandelier plays up the drama of the dark walls.
(image source:  colemansinlove)

5) Chandelier – This is the chandelier I’m hoping to buy! We are holding out to see if we can’t find anything less expensive, but at under $100, it is already a great price!

So, as far as the stylistic elements of this room goes, I’d really love to give this room a base of classic elements (with the low chair rail, the chandelier, etc.) while incorporating a few rustic elements as well.

We painted the hallway over the weekend (just the dark color so far). Getting the right color became a huge stress-fest really quickly. Tyler and I definitely agreed on what the color should be, and we definitely were both consistently unhappy with what we were getting. The color that was in our heads was not available on a color chip (at least not one at Lowes… Or Osh…). First, we picked a color called new spruce, by Eddie Bauer for valspar. It is the perfect level of saturation and brightness, but the hue was slightly more green than we wanted. So, we decided to just go with a pantone color. I chose 309c, but Tyler didn’t realize that there is C and U pantones (for coated and uncoated), and while it really shouldn’t differ when you print them, it probably made a difference when they are color matching wall paint, because it came out very chalky, and way more gray than what the pantone actually looks like. (Also, he ended up getting the wrong paint in general, and… well, a bunch of other things came back wrong and it just compounded the stress-fest). 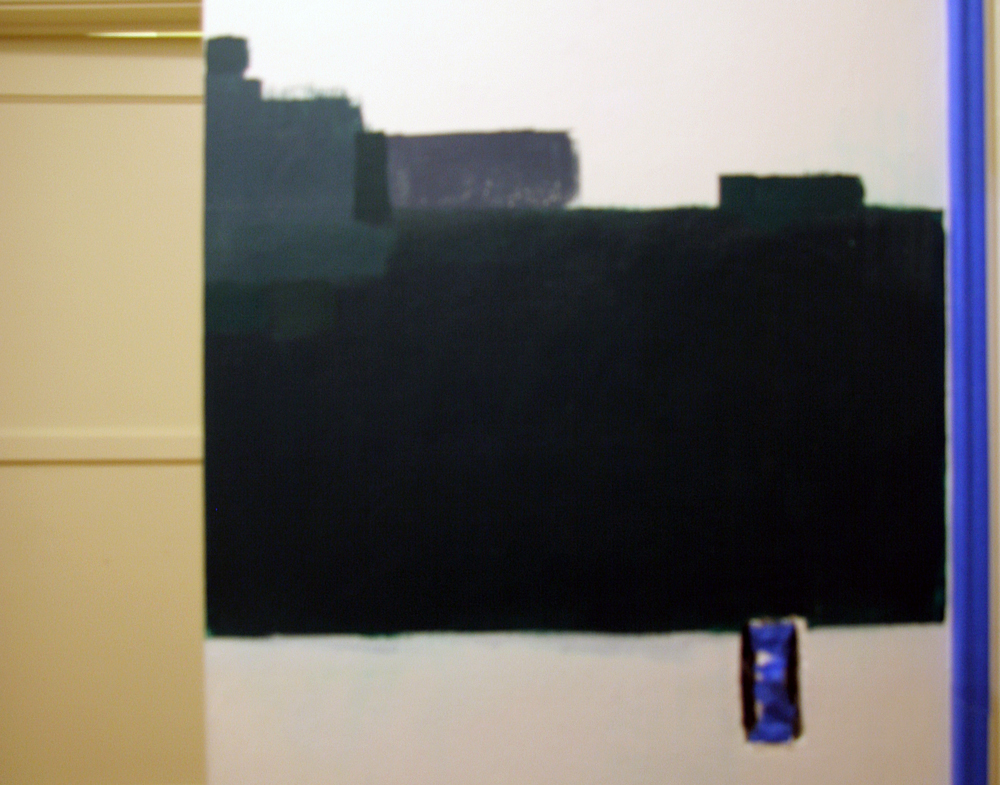 Trying out different colors… sorry for the blurry photo :(

So, I set to mixing paint. I tried to get the right ratio of new spruce to what I affectionately refer to as poor pantone match, but I felt like there was too much white, so I started adding some black paint I had lying around, but it still was just too green. Then Tyler went out to buy a sample of a bright blue to mix in, but Osh (which is about one mile from us, vs. Lowes which is 10 miles from us) doesn’t sell paint samples so he came home. Then after I said — well, we still need paint so go buy a quart– he drove back and bought a quart of a bright blue color called blue maritime by Pratt & Lambert and I set to mixing. I kept playing around with the right ratios, but eventually my desire to just get it done with took over and we just started painting. I think it may have come out perfectly after all, but GEEZ! Now I’m betting someone is going to ask me what the paint color is, and I’m not going to be able to deliver… :(

Anyway, here are some before pics! I didn’t clean or stage these photos at all, so there is a nice sense of realism here… Note Laelia’s lovely drawings and our little patch of paint after we decided new spruce was not for us. I never really thought of this as the home for the sunburst mirror, it just kinda ended up here, but hopefully it will find its way into the living space. Oh! And you can see that I’m totally confused and still completely undecided about living room colors… 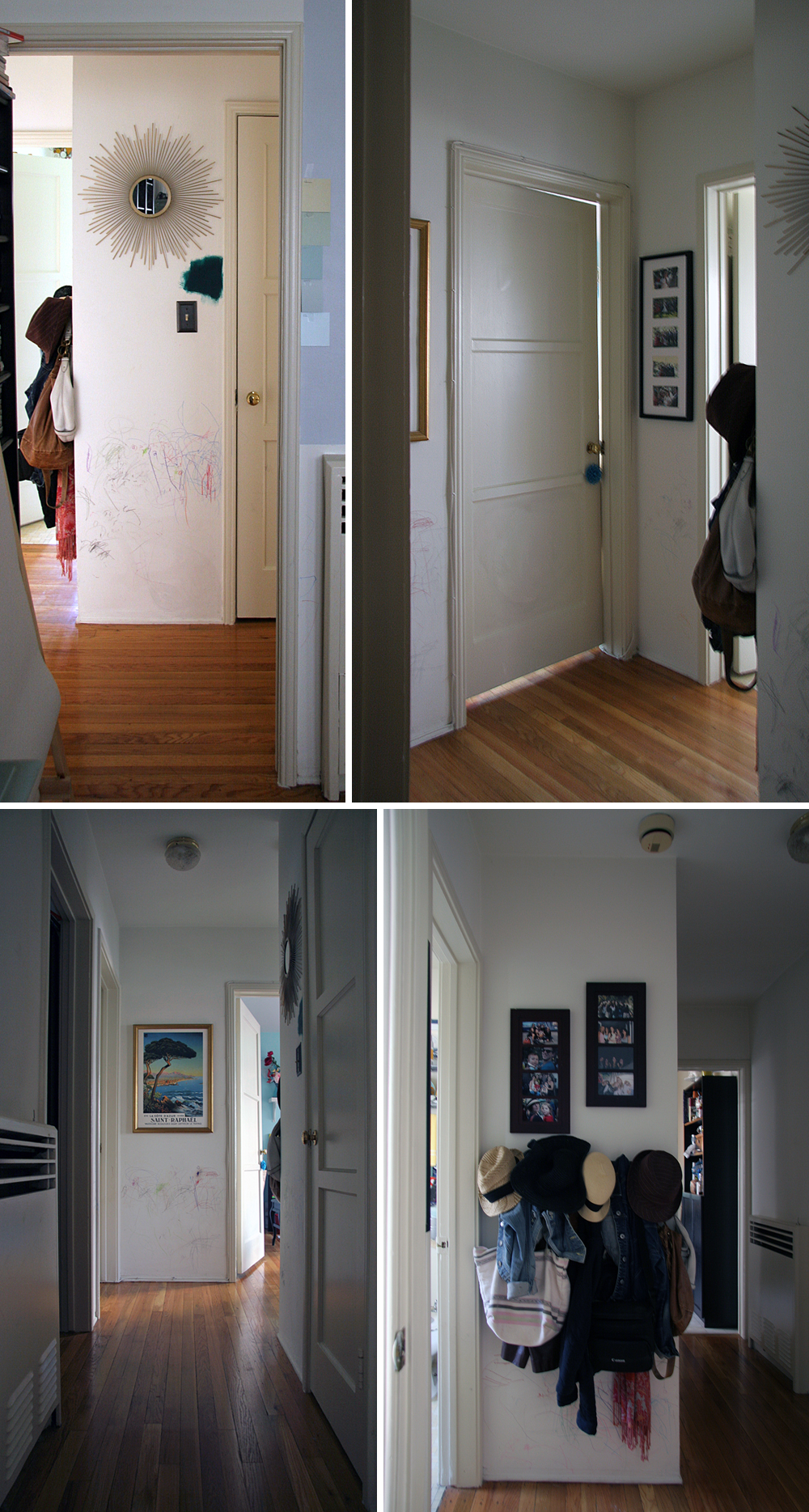