Happy 2012! Reflections on years past… 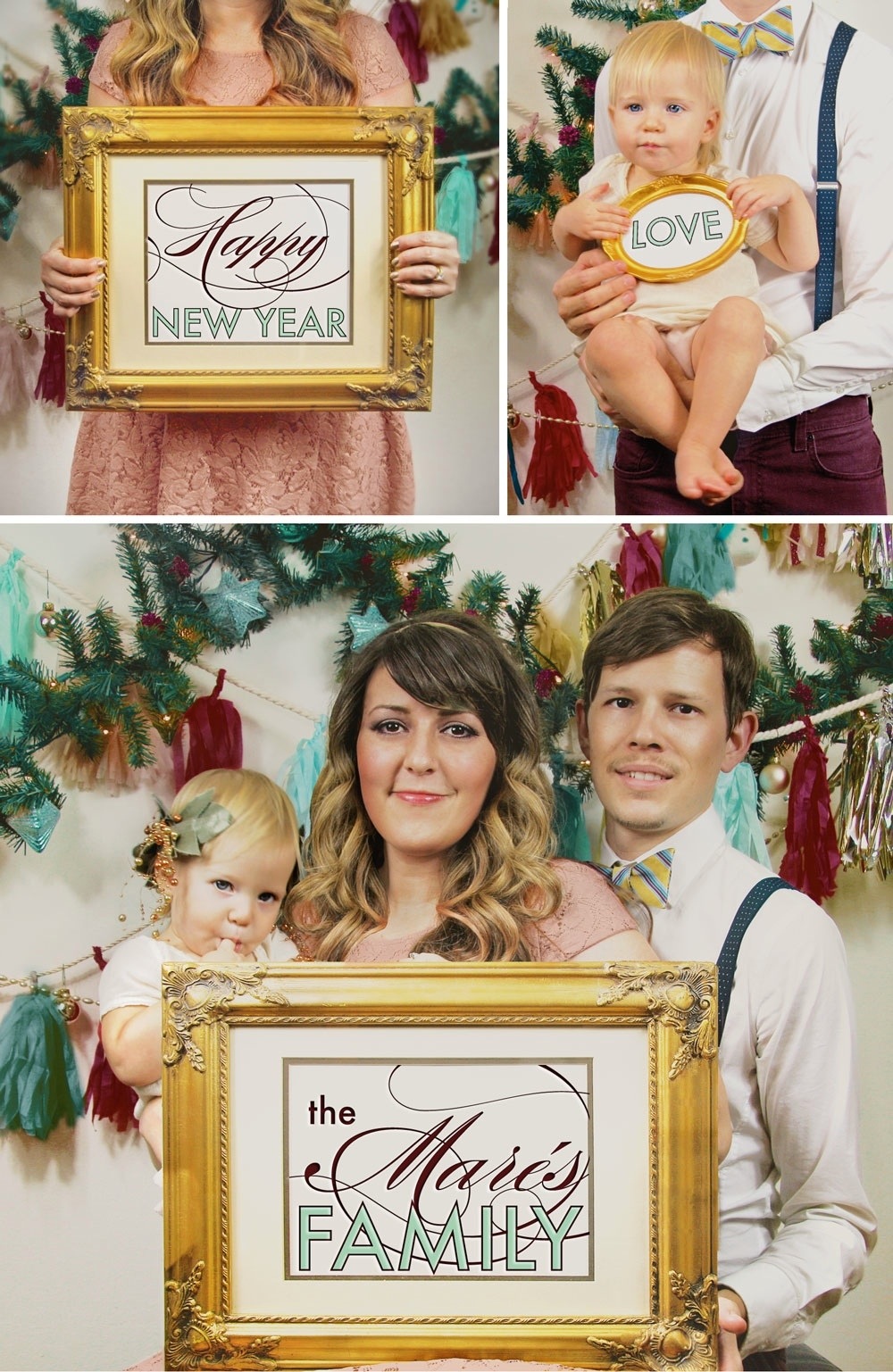 front of our card 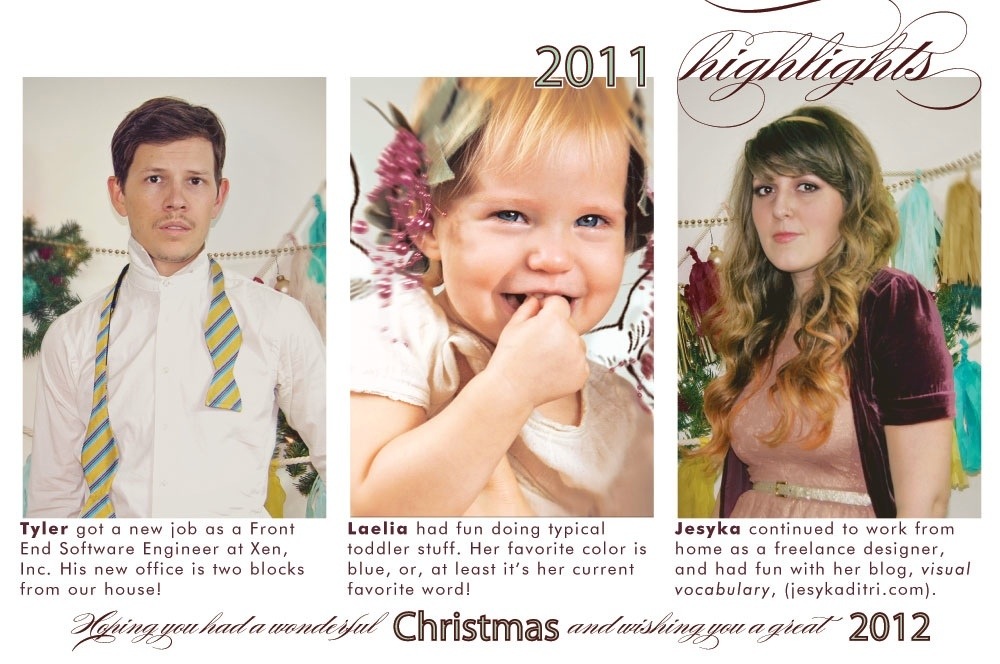 back of our card

We took these photos the day after Thanksgiving, and they were intended for our holiday card. Well, they didn’t make it before Christmas, so they became “Happy New Years!” cards. Considering I had to edit all the photos and design the card, then print them out and assemble them, I’m sure you can guess why it didn’t happen until after Christmas! My mother and I agree that it’s still “the holidays” until New Years, so i thought we should just go ahead with them since we spent so much time taking the photos, even if I don’t like the way they came out. I particularly dislike the family picture we got, and this was the best of probably 40 shots! I think my face looks huge, Laelia has her finger in her mouth, and Tyler doesn’t look very present… but whatever. My mom will probably love it.

The actual photoshoot itself was a huge ordeal in which Laelia cried and wouldn’t sit still for essentially the entire time, and it caused us to probably take at least TWO hours just snapping photos and it ended with me joining her in a cry fest! Needless to say, we didn’t get a photo we really loved, and everyone just ended up grumpy. Although I know that this is a totally normal occurrence when people attempt a family portrait, especially with young children, I don’t exactly understand WHY?!! Clearly, I’m a little scarred…

Anyways, time to reflect on the past year, and think about the next! 2011, although not without it’s hardships, was definitely better than 2009 or 2010. I’ve wanted to share a little bit about what we’ve gone through for a while, because I feel we can’t be alone, right? And we’ve felt very alone in all of this sometimes… (Fair warning; wordy-wordy-wordiness follows…)
2009 was hard for me and my husband; in January, two weeks after coming back from my third business trip overseas,  and after surviving many many rounds of massive layoffs, babystyle shut down most of the corporate office and announced its closure. The very same day we found out babystyle was closing its doors, Tyler signed a 2 year contract for a job that would pay him double what I made at babystyle. This took the edge off of loosing a job I loved but  it definitely turned out to be too good to be true. Anyway, seeing as the job market was horrible and I was getting married in a few months, I decided to wait until after our wedding to really focus on getting a new job. I started freelancing  for Charlotte Russe the week after our wedding, and I got pregnant about month later! That was when we decided I would stay home and work freelance and take care of our child. The job market had not “rebounded” yet and I didn’t want to stress out about getting hired while pregnant nor the subsequent maternity leave, child care and pumping at work that would occur (Moreover, my job is absolutely doable from home. I wish more employers realize this…). We thought everything would be okay, considering Tyler’s work could easily support us with out me working anyway (I’m obviously the sort of woman who needs an outlet, so I need to do some sort of work and have consistent personal growth in order to maintain my happiness… I also intend to go back to work by the time my children are school aged, if I haven’t built my own business by then!); well, what can I say–we were young and naive and believed the B.S. about if you are a patient, good, honest, hardworking person that you will be rewarded. Actually, we still believe that, but we also know that it can make you vulnerable. The owner of this company was taking advantage of my sweet husband and his endless patience and understanding (and his distinct desire to avoid conflict and confrontation). Invoices started getting paid in half by April. We still managed to pay for our wedding in full (we had what is considered by many a very modest budget of 10k, but it was still a lot of money to us), but the half paid invoices turned into quarter paid invoices, and we were no longer able to make our ends meet… By September I think we had gone a month and a half with out pay. In October, Tyler’s car (a ’91 Mazda RX7 which he loved) was totaled when a guy making a left from Wilshire onto a side street smashed into him on his way home from a job that wasn’t paying him. In November, they officially asked their employees not to come in anymore until they could find more investors (they never did). Tyler was working on contract, so unemployment was not an option. Also, I should note that I had few hours of freelancing, and that in December CR hired a new creative director and I assume she hired some designers in-house, and I haven’t worked for them since. So, here we were, 6 months pregnant with the holidays upon us, with a mid 5-figure sum in unpaid invoices, and both unemployed. Awesome. And although we got married and found out we were expecting in 2009, we started 2010 hoping it would be much better than the last.

So that brings us to 2011. 2011 was definitely better! Yay! We decided to put a lot of things behind us, and restructure our future plans. We had let go of our idea of owning a house any time soon, but we also had to let go of the idea of even renting one; we also had to let go of the idea of ever getting our outstanding invoices paid. We pursed it with lawyers, and despite contracts and invoices his ex-employers essentially came back with “prove we owe money”. We could sue, but he could file for bankruptcy and we’d be out the court fees. So, I’m not officially saying we’ve given up, but we just have to move on like we’ll never see that money, which really helps us manage our debt. The worst part about saying we are in debt is that the amount we owe is less than half of what we are owed, which is infuriating. Mostly though, we had a lot more good things happening in our lives. I decided last January that I would give myself 6 months to find more freelance work and maybe start on some of my own projects, and if things didn’t pan out, I would start looking for a job in June. I put up my portfolio and I got 3 big projects by the end of January! I also started blogging regularly at that point. A year later, I have a little following, a little notoriety, and I have made friends! I really love blogging way more than I expected. I mean, I expected I would really enjoy it, but I could see myself making a living this way… Tyler got a new job which he’s really enjoying, and they just moved down the street! DOWN THE STREET! In LA! This makes up for his old commute from Simi Valley to Santa Monica and my old commute from Thousand Oaks to Downtown! It takes him less time to walk there (11 minutes) than it does to drive… The job also comes with enough money to get us out of debt and hopefully into a house in the next 3 years, according to our new fancy budget I worked out. We also finally paid off our taxes last month! Yay! So, we have decided to stay in our apartment another 3 years, to take advantage of this great commute, and just because its nice to know where we are going to be. We’ll probably be squeezing another child in here, but I accept you, challenge! I probably could talk a lot more about 2011, but I’m tired of writing on a holiday…

Looking back, I can tell you that I am SO GRATEFUL that our problems are mostly financial, and that we have our good health. It is something I don’t forget to be grateful for everyday, especially when I start to think, “what if one of us gets sick!?” (although financial troubles and crappy insurance sure can compound health issues…). We learned our lesson about contract work and letting employers take advantage of us! I’m also grateful for our friends and family who have been willing to help us where they can… I’m grateful we’ve kept a positive attitude about things, and just tried to enjoy every day…. We are feeling really positive about 2012. I really hope I get to move forward with all the ideas I have, and that Tyler gets to finish a few of his own side projects! I hope everyone has a great year. 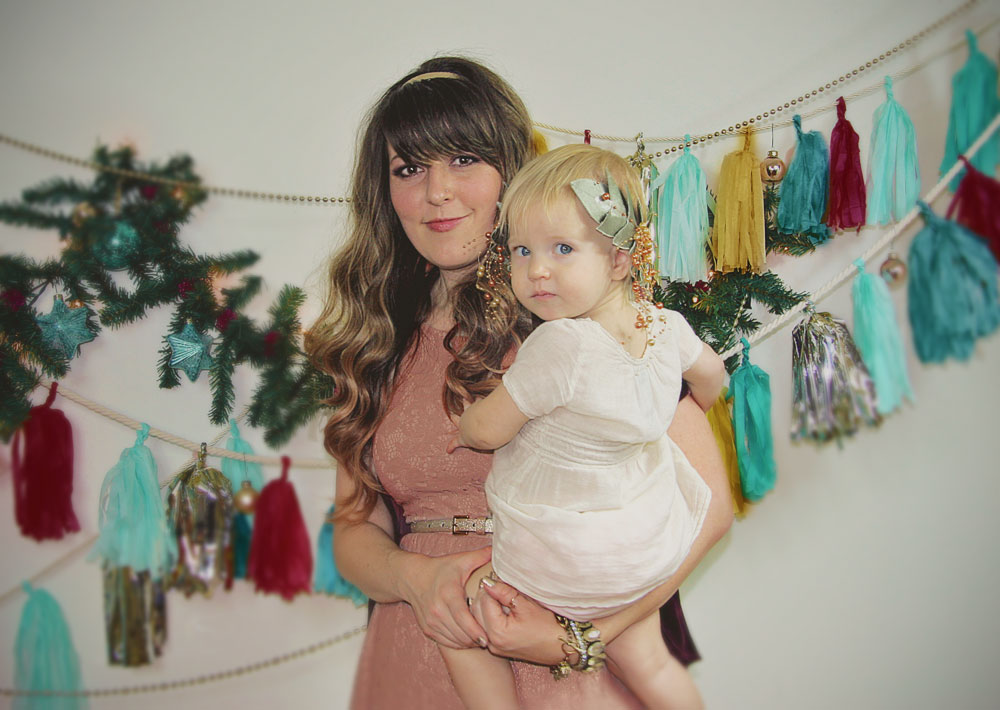 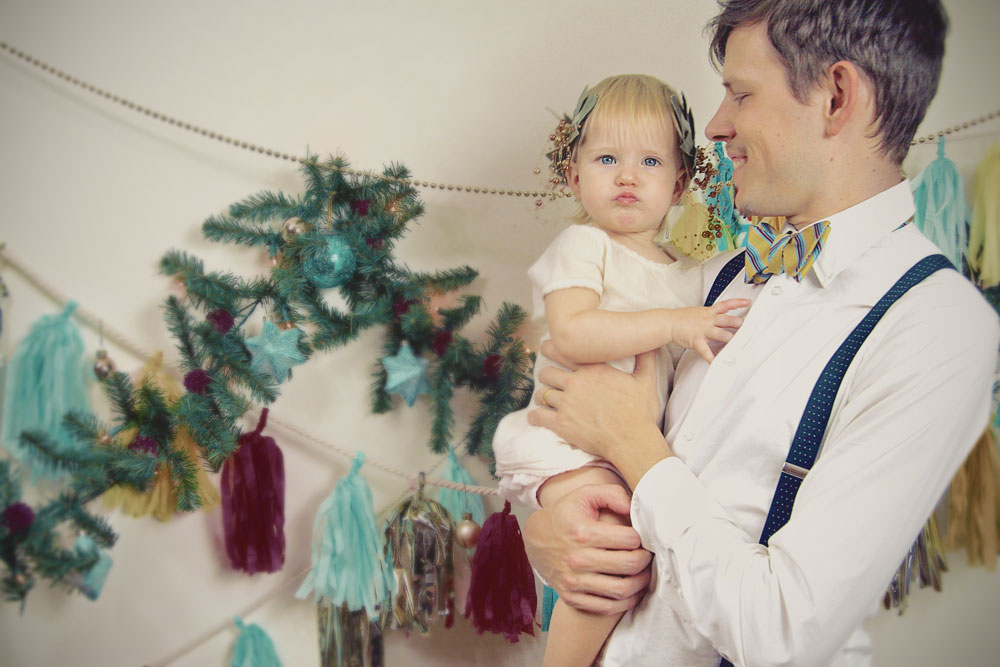 categories / Graphic Design, Invitations + Paper, Let's Get Personal, Photography
Tags / holidays 2011
Warning: count(): Parameter must be an array or an object that implements Countable in /nfs/c04/h06/mnt/59434/domains/visualvocabularie.com/html/wp-includes/class-wp-comment-query.php on line 405


3 Responses to Happy 2012! Reflections on years past…