Well, I’ve been so busy lately that I feel I have to officially say that my posting will have to be sporadic from here until I get my new site design up! I was thinking about officially stating a hiatus, but I’m sure I’ll continue to make new posts until then. I just might go a week or so with out a new post while I continue to tackle all of the projects on my overflowing plate. :) But, the good news about that means I will have a TON of new content to eventually share here, so that’s exciting, right?

Today, however, I want to share our recent family trip to Idaho. On Monday, July 23, we packed our Scion XB full to the brim and set off on what turned into a sixteen hour journey across four states, and listened to Harry Potter and the Deathly Hallows along the way. 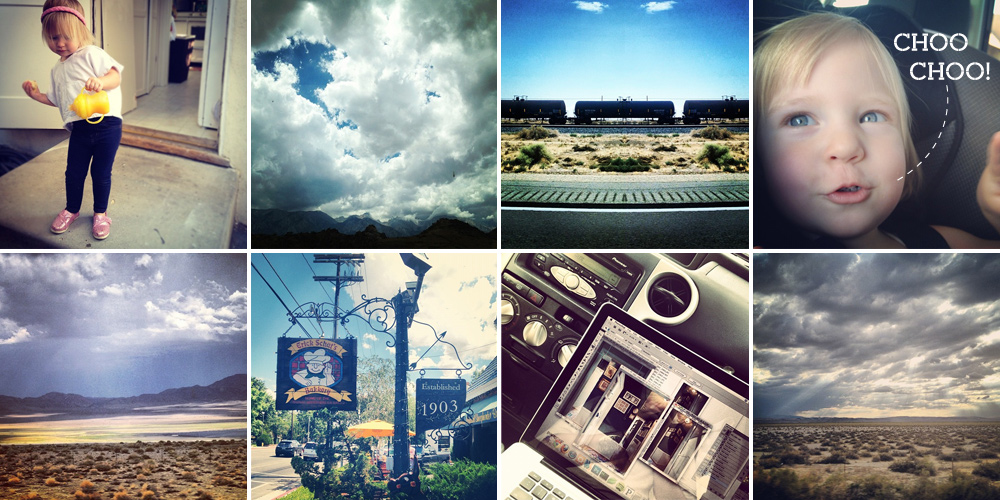 My husband’s immediate family lives in Boise, and we went up for a special occasion; my brother-in-law’s wedding. But first, we went up to a cabin in Stanley, Idaho for two nights. It is owned by a friend of my father-in-law’s, and it was awesome. It had 5 bedrooms, six queen sized beds, and 3 bathrooms, a large play room, a full kitchen, dining area and living room. It was extremely well suited for our little family of three, Tyler’s parents, his aunt and uncle and 3 cousins (who were also up from southern California), his brother’s family of 4, his 3 cousins and his sister and her boyfriend (which is 19 people if you weren’t counting!).  The only person who didn’t come is the groom himself, because he had to work. It felt a little silly to visit Idaho and not see him for 2 days, but he is in Hawaii for 2 weeks on his honeymoon, so I think everyone can understand that! 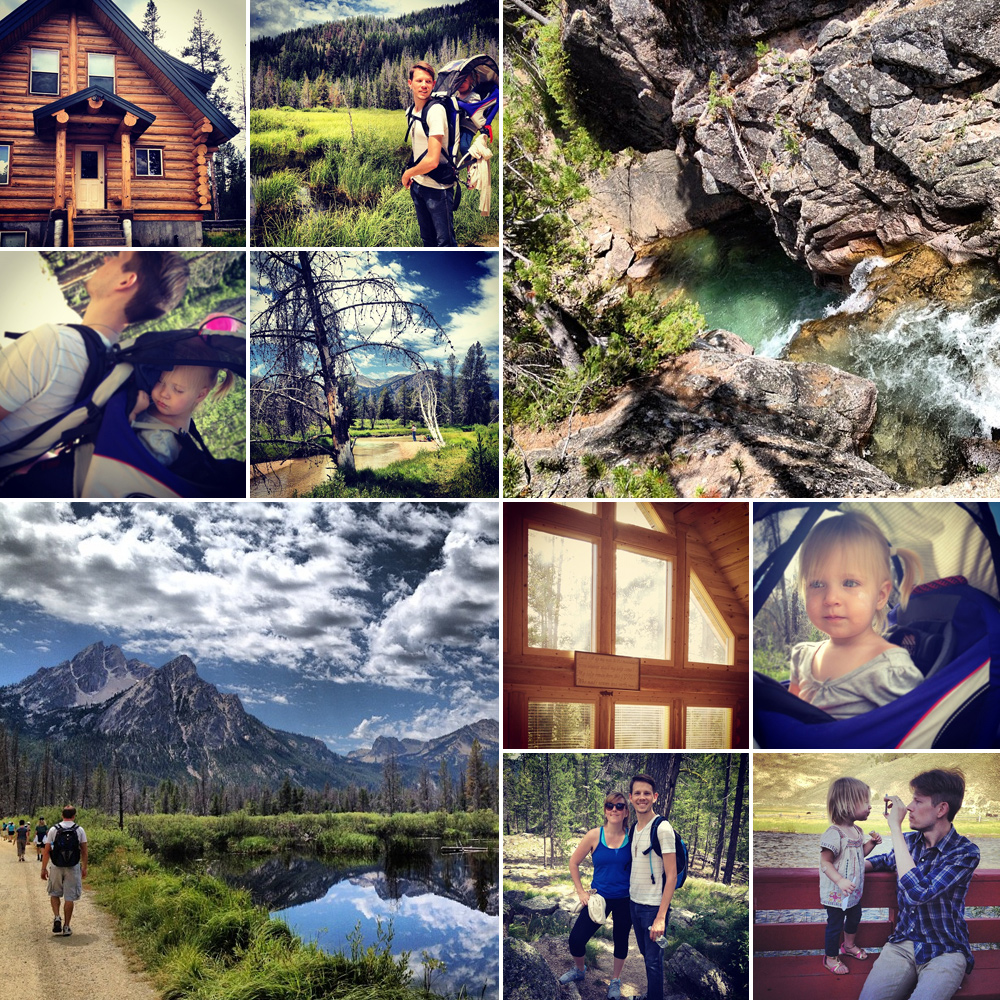 We went on a hike the likes of which I haven’t been on since I was a kid and went hiking in Mammoth on the regular. I couldn’t stop talking about how clear the sky was, how clear the water was, and how bugs kept flying near my ears (which always results in me flailing around and shouting). I’m sure I sounded like a total city slicker, ha! It was really beautiful though, and I’d love to go back, but I’d like to go back better prepared. Mostly, I’d need to be prepared to be without internet and PHONE service for the duration of our stay (which I absolutely wasn’t), and Tyler needs some hiking gear (converse don’t really cut it!).

We came back into Boise on Thursday, and Tyler and I actually got a DATE! It was the second date we have had in over a year and a half, so it was much needed. Friday we had the rehearsal and the rehearsal dinner, and Saturday was the wedding! 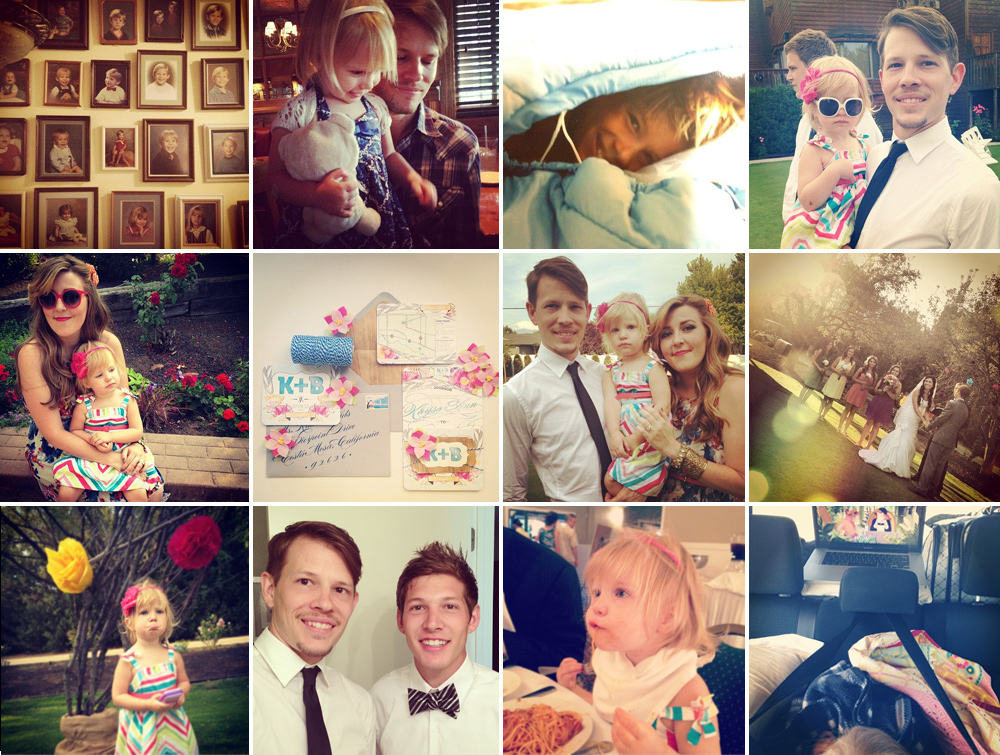 Top:1) The photo wall at my in-laws. 2) Laelia and Ty at the rehearsal dinner.3) A photo of a young Tyler that makes my heart go a-flutter. 4) Laelia being diva-ish (not something I am encouraging!). / Middle: 1) Mommy and me. 2) The invitations I designed for this wedding. 3) Family photo! 4) And the ceremony. / Bottom: 1) Laelia’s infamous pout at the Altar 2) Tyler and the groom 3) Laelia munches spaghetti 4) Our poor man’s version of TV in the car on the ride home.

The wedding started at 7pm, and it was almost 100°! The sun sets much later in Boise than it does here in Los Angeles, so this was quite a novelty to me. I love the idea of truly late summer nights! I curled Laelia’s hair for the first time, but between the heat and a nap, they pretty much fell out before the ceremony even got on it’s way! Somehow, we  ended up with the only seats in the sun, and after the usual wait for a wedding to get started, Laelia was loosing her patience and she couldn’t stay still or stop asking for “daddy”; he was a groomsmen and oh so close to her, but not next to her. I think it was driving her nuts! So we went for a walk and missed half the ceremony, which I was a little sad about because my husband was in it, and my brother-in-law (who is a youth minister at Calvary chapel in Boise) was marrying my other brother-in-law, and I find that so sweet. But she settled down in the last half of the ceremony on her grandpa’s lap with a dum-dum, courtesy of the bride’s mother. :)

My new sister-in-law’s sister, Sarah, and I struck up a friendship while I was working on the invitations. She let me borrow her Nikon D700 to take some photographs of the wedding! Holy crap that thing is AWESOME. And her lens was beautiful. I’m just going to share the exit photo here, because I don’t want to spend days editing photos quite yet! 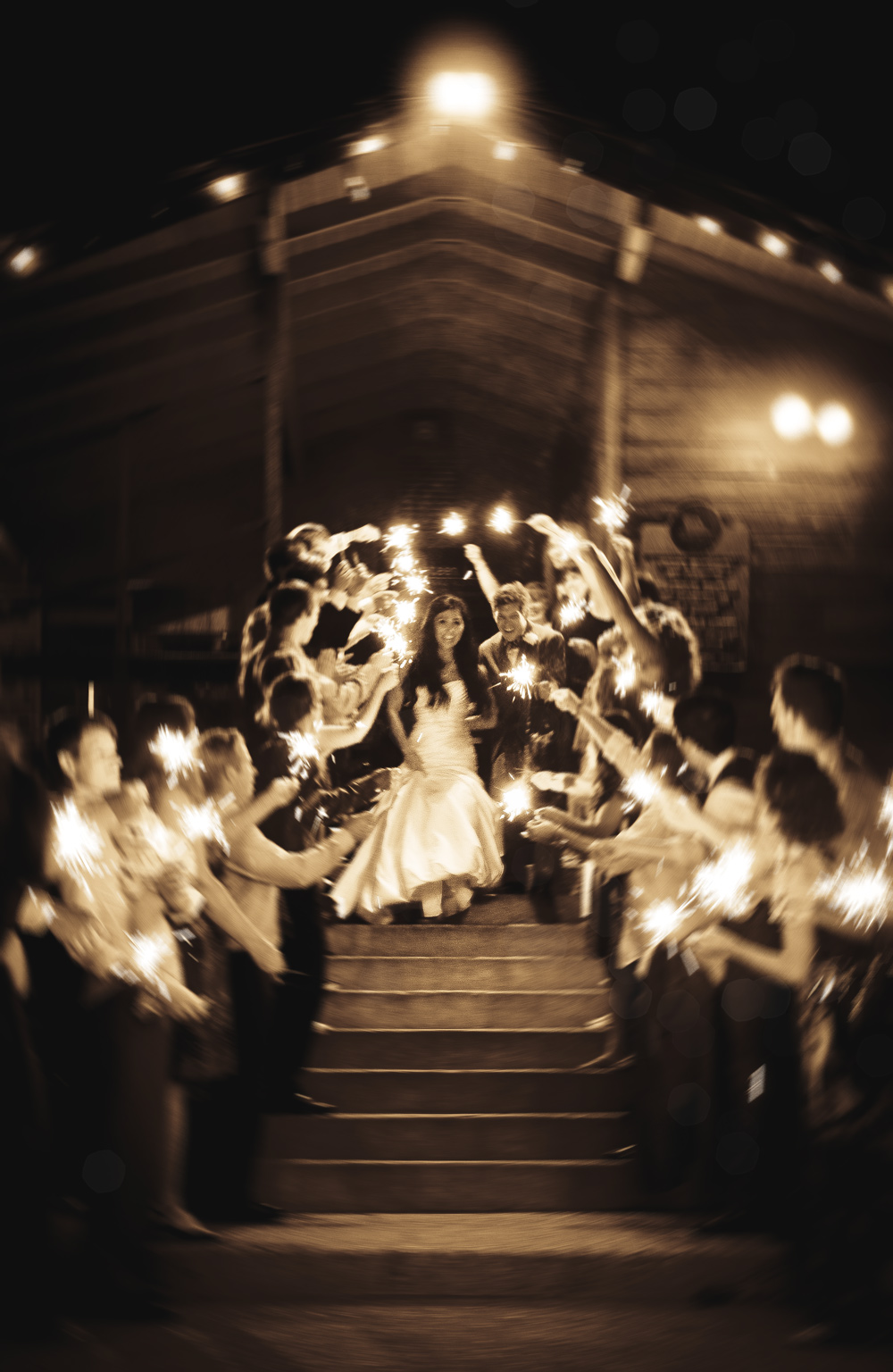 We originally intended on being there from July 21-July 30, but we had to leave California 2 days later, and come back a day earlier because my plate has just been too full and it’s really hard to get any work done when you are surrounded be tons of family that you will happily spend hours chatting with. We definitely felt the loss of the days though; we really didn’t feel like we spent enough time together when we left. I felt like I really connected with Tyler’s family–his extended family included–on this trip, and Tyler felt like he really re-connected with his family, which is so important to both of us. We felt an inkling of that when they visited for grandmommy’s memorial, but it was solidified over these 5 days. So, when we set out to depart we all got emotional, because we don’t have a plan set in motion to see them again! Unless we fly, traveling up to ID is too hard in the winter. At least Tyler has his entire extended family out here, so we can still see them regularly. But I’d like to get creative about figuring out how to see them more than 2 or 3 times a year!

Anyway, back to the mention of sporadic posting; things will be off and on until I get my kitchen and bathroom makeovers done, the redesign of my website done and live, my new invitation and design shop up and live, a couple of invitation sets done, and a new semi-secret project finished! All of this probably won’t be complete until after my 30th birthday at the end of September! When my new site is up, I plan to have a strict schedule and stick with it. It will certainly be a motivating factor! I have probably HUNDREDS of ideas for tutorials, recipes, transformations and ideas to share here, and I’m so eager to share!

categories / Let's Get Personal
Tags / weddings
Warning: count(): Parameter must be an array or an object that implements Countable in /nfs/c04/h06/mnt/59434/domains/visualvocabularie.com/html/wp-includes/class-wp-comment-query.php on line 405


One Response to Idaho Summer 2012