It’s been a long while since I have posted an update for the living room and office space in our apartment, but a lot certainly has changed! A lot hasn’t as well. Since my last full post about 3 years ago, we have sold our hutch, our chairs, the expedit we used behind the couch, and Laelia broke the old coffee table. I gave the old hope chest back to my sister, and our ancient projector died as well. Alternately, we purchased a new coffee table from West Elm (as opposed to making our own), two Stradmon Chairs from IKEA, two RAST dressers that I gave a little campaign dresser treatment, a BESTA credenza, and, as the TV in our bedroom had also died, we bought a new TV. Also, since that last full post, I have updated the curtains, and we have blinds on all the windows. 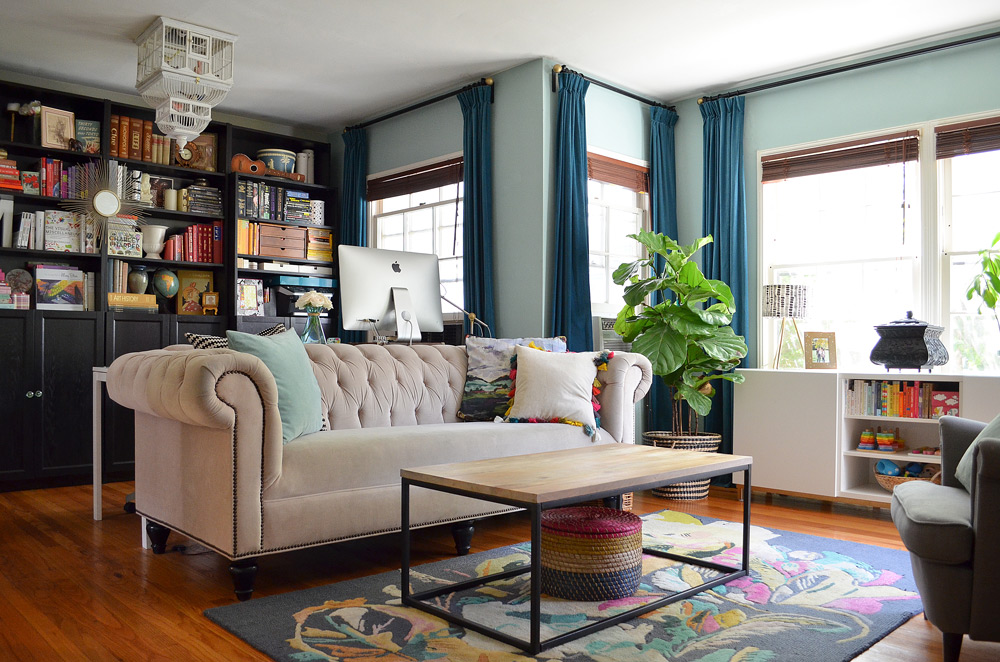 I feel compelled to mention that, despite how much as I love the coffee table from west elm, I don’t think the wood is sealed; any tiny drop of liquid makes a stain, which we learned the very night we brought it home. We have since sanded it down and put 3 coats of clear finishing spray on it, but it doesn’t seem to help. I wish West Elm had reviews on their site so we would have at least known about this before we purchased. I did try to research before we purchased, and I didn’t see this issue mentioned, so I’m mentioning it here. The wash is really lovely, so I’m guessing this is the price you pay for the lovely wash. It is not very complimentary to having young children about, however! I do still love it, and we plan on giving it a solid sanding and perhaps re-staining it after we move and have a garage. 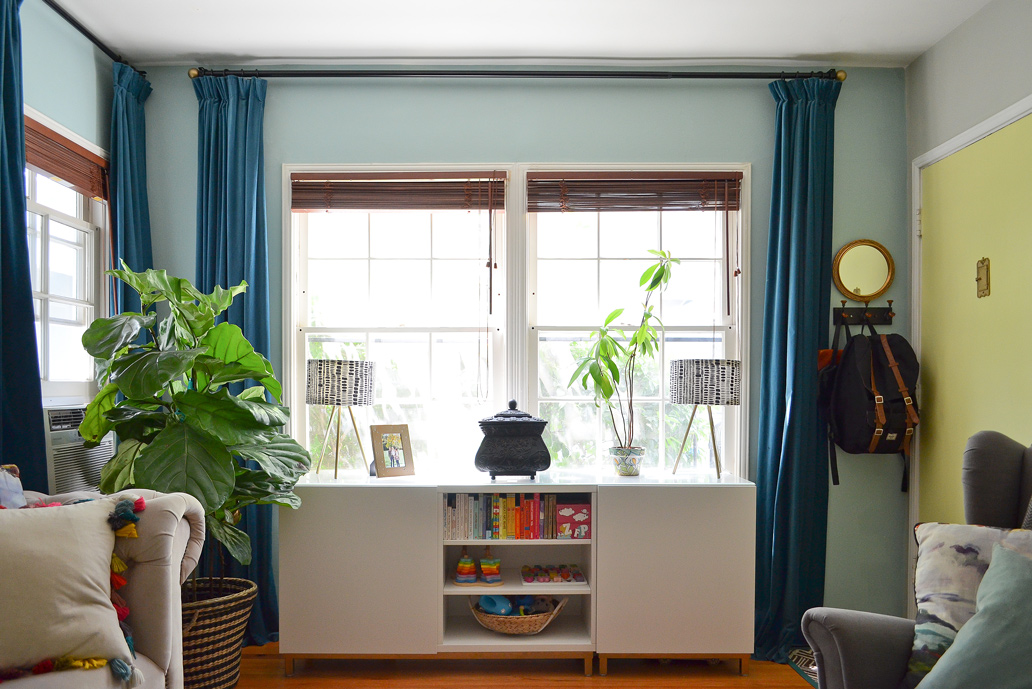 When I became pregnant with Luca, I decided I wanted to bring some toys into our living space on a more official level. I knew he would be sharing a room with us (full update on our bedroom soon!), but there would be little space for his toys in our room, and I didn’t want to put baby toys in Laelia’s room. So we bought this BESTA unit from IKEA, and it is full of games and toys! It has served us well. And, naturally, I spray painted the base gold. I also devised this little Lego Duplo play station (below), from a 4×2 Expedit. A small IKEA hack! 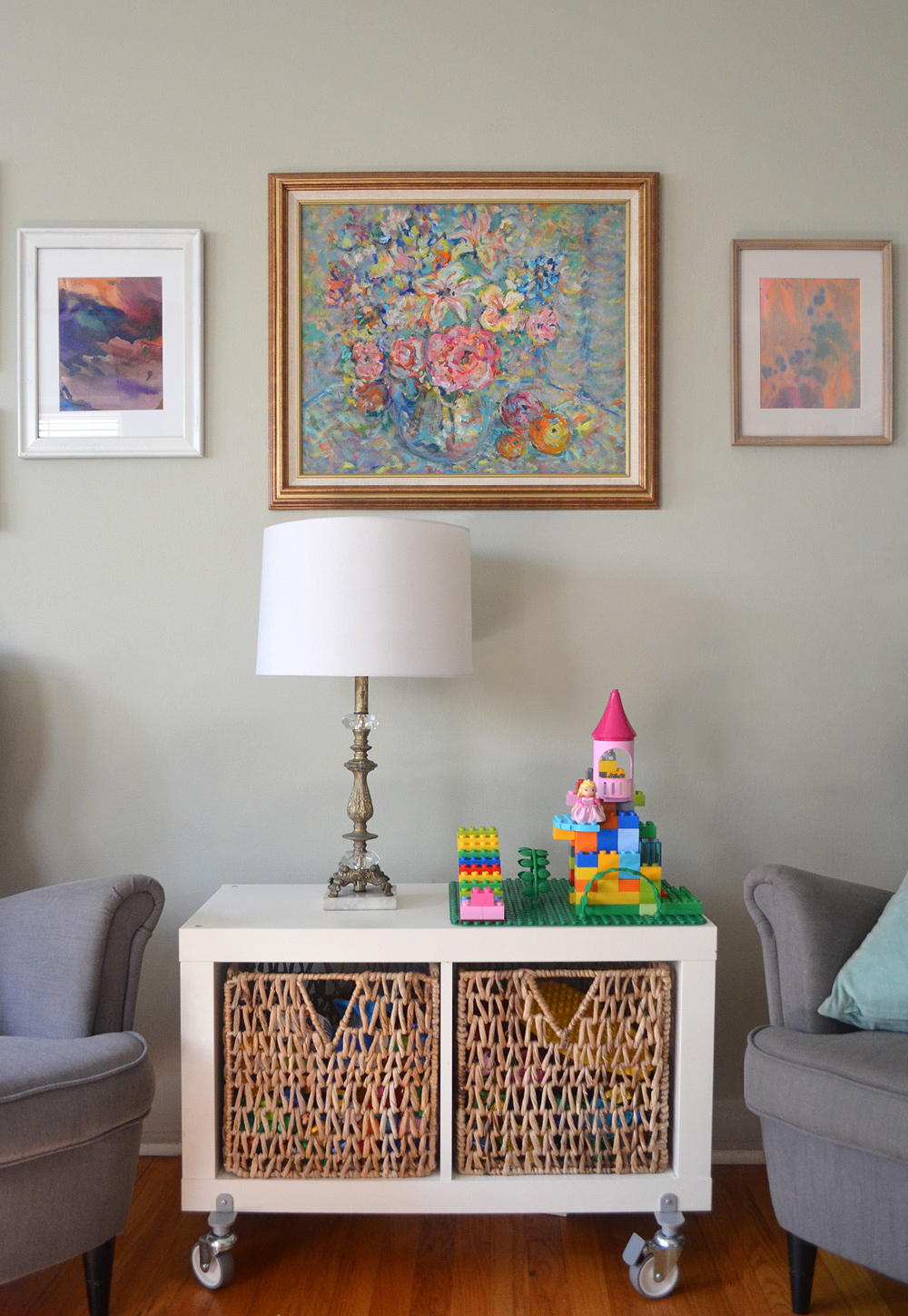 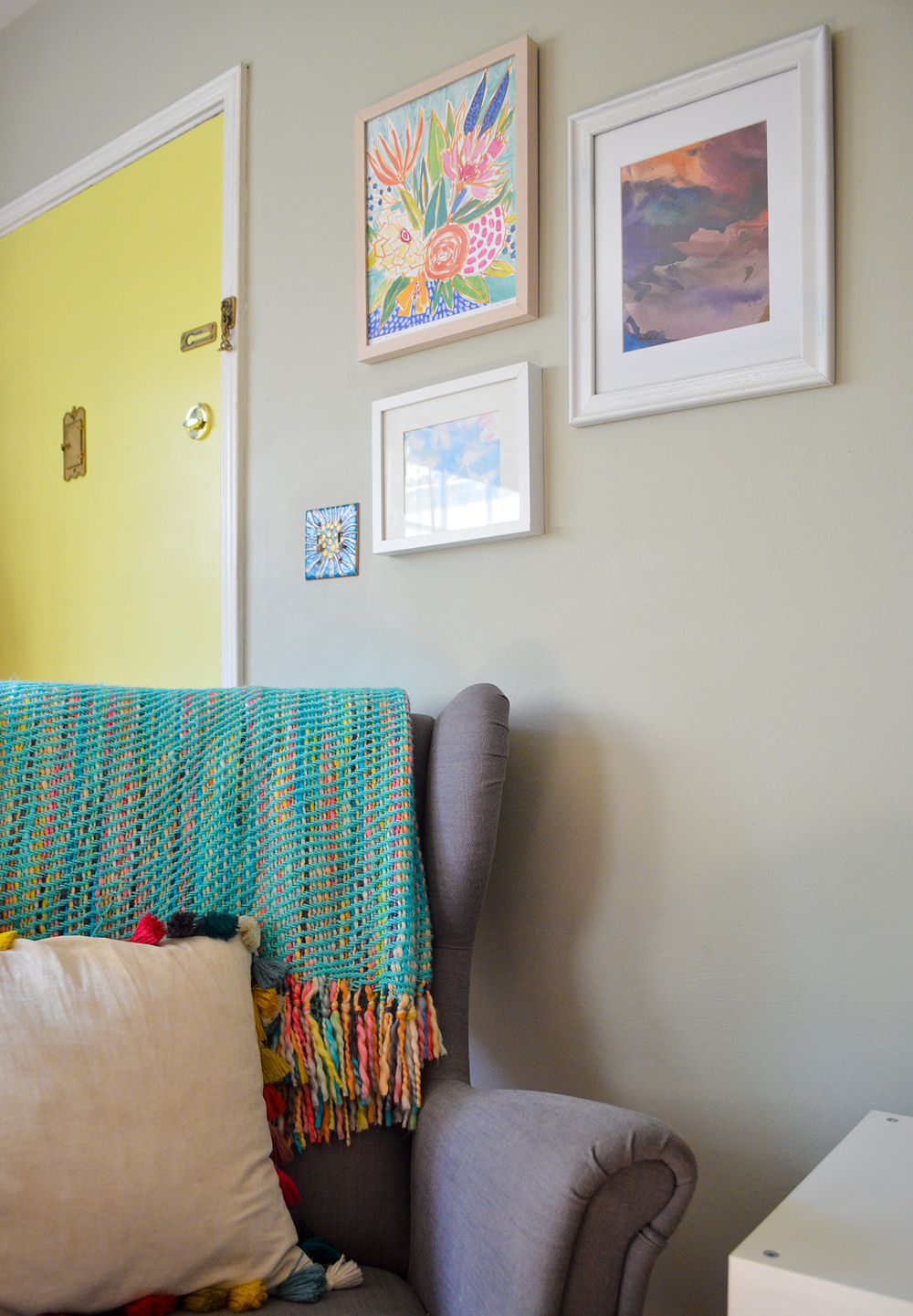 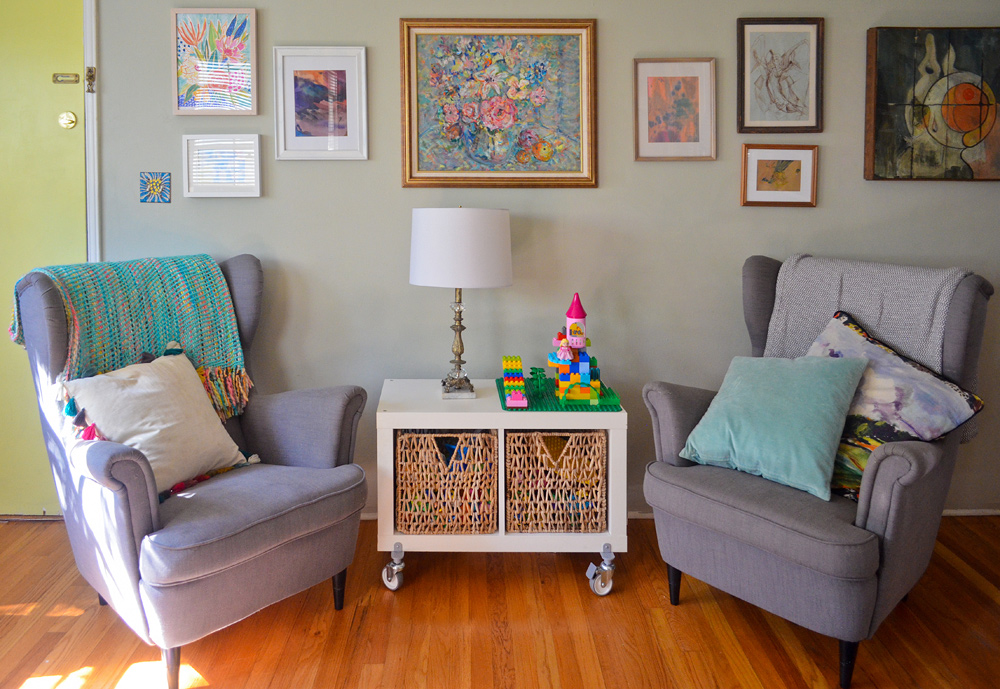 Four of the paintings above are Laelia’s paintings. 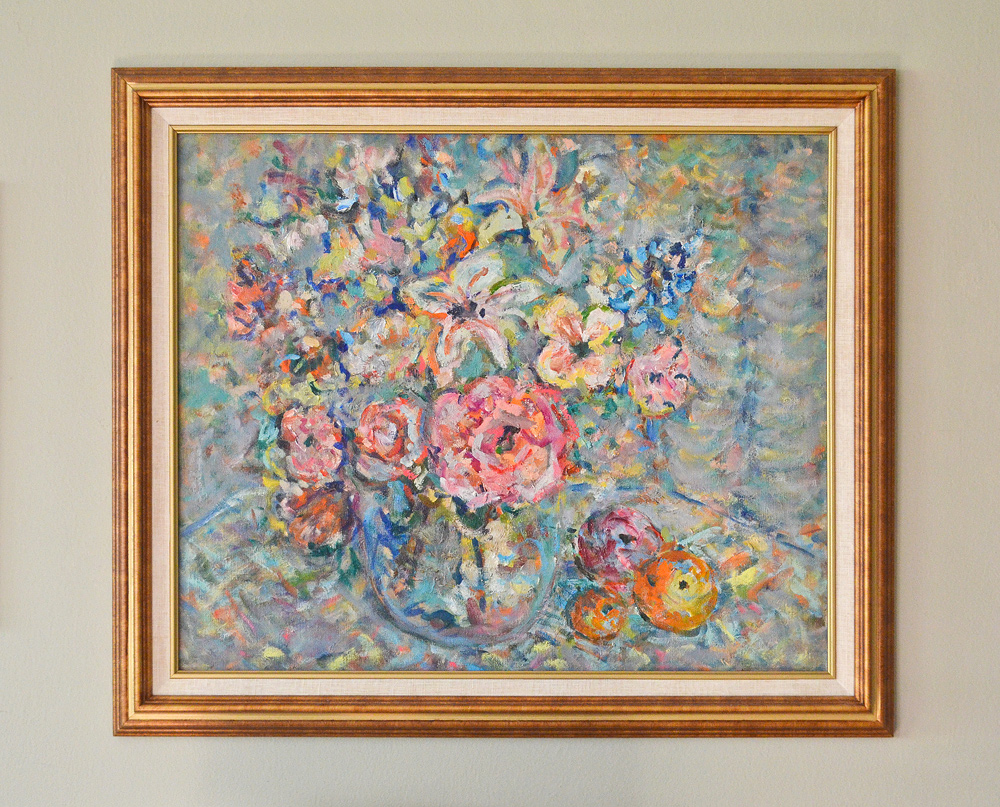 I bought the above painting from the Rose Bowl Flea Market, and it is one of my most favorite purchases yet! Below is a painting Laelia made in preschool. 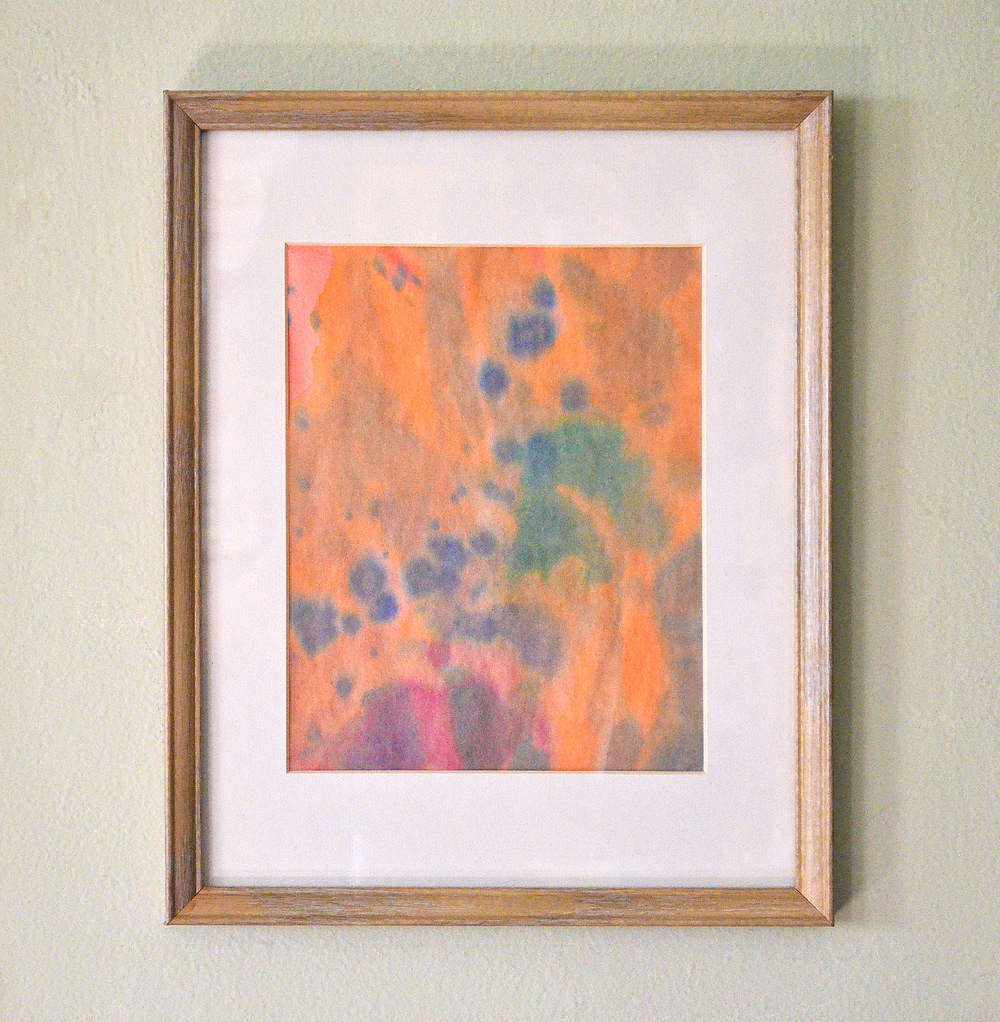 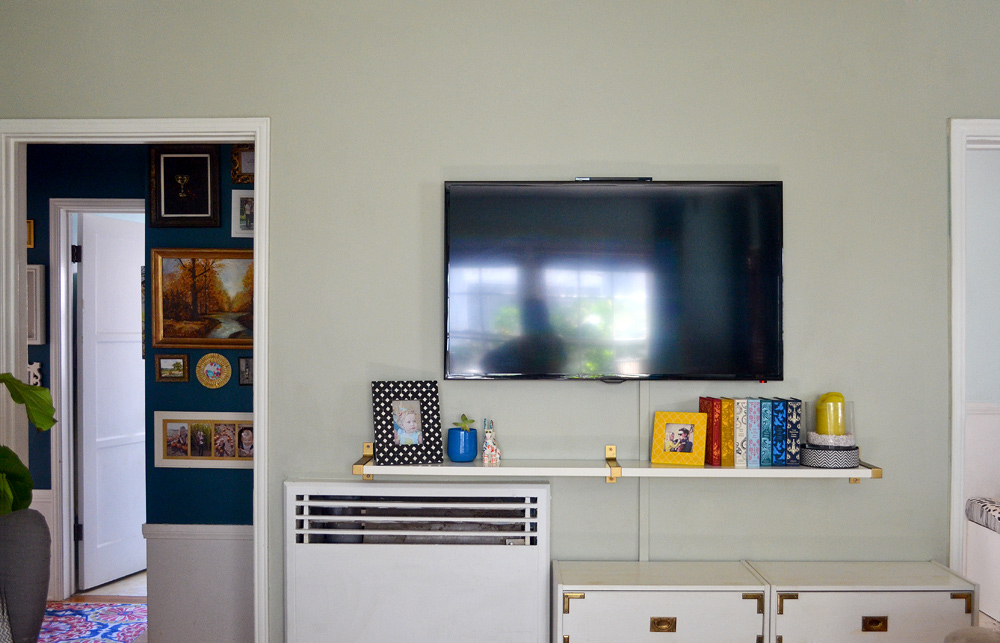 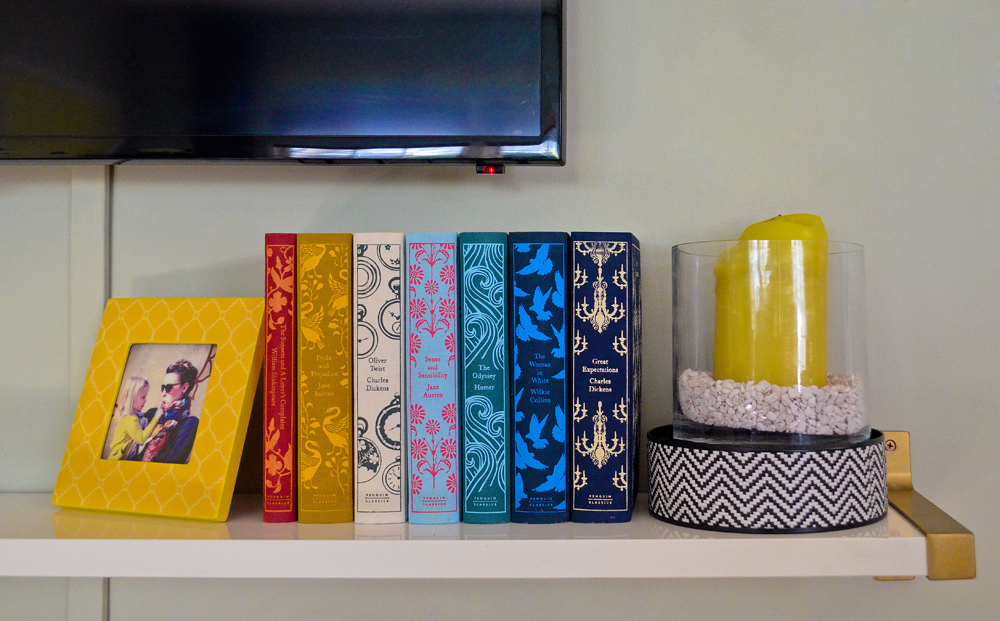 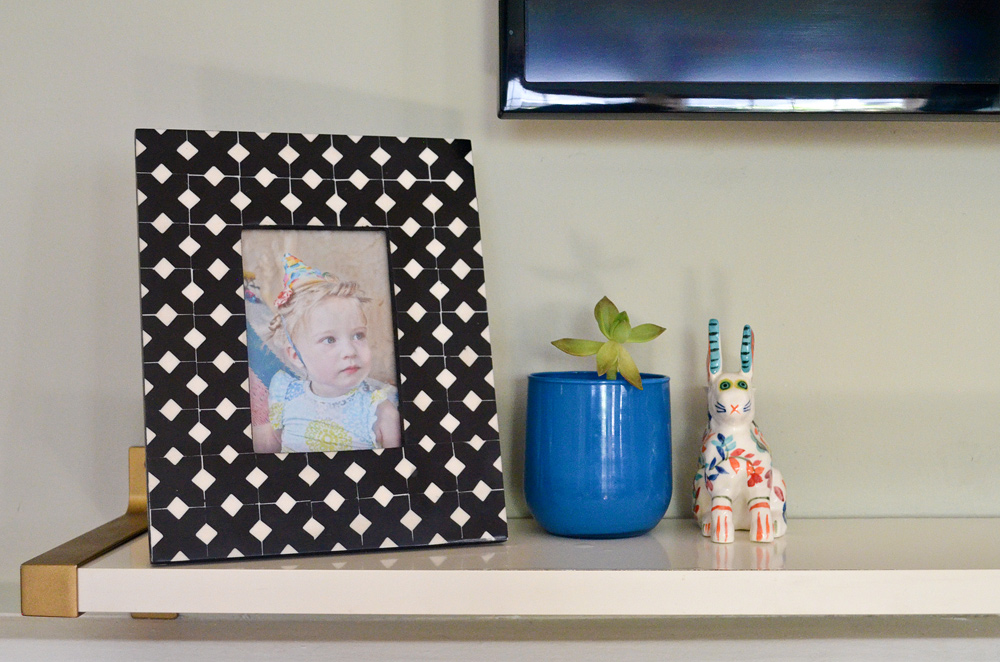 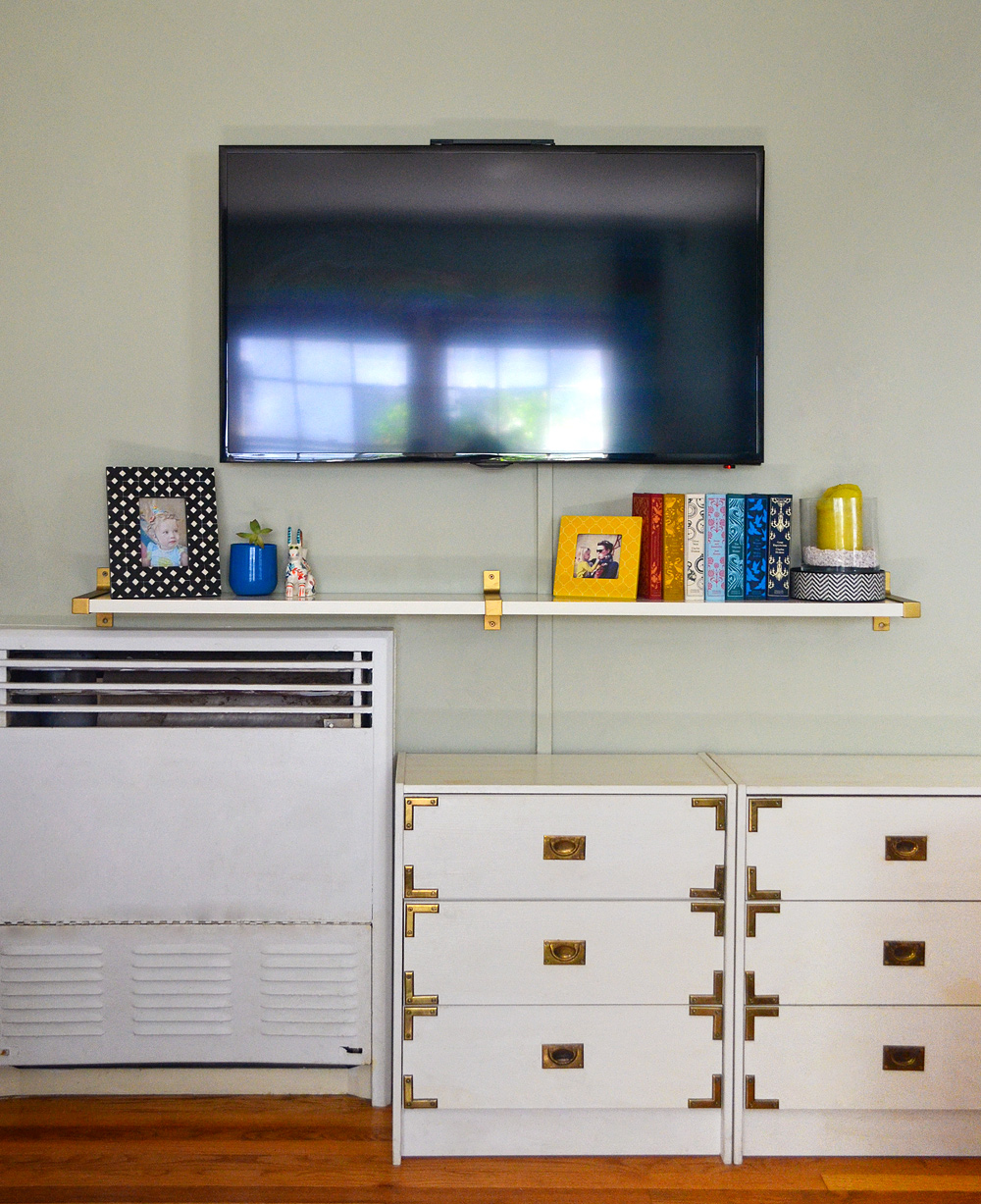 Above are the RAST dressers which made to look like campaign dressers (as is very popular with RAST dressers). The hardware is antique, purchased from eBay. We store our DVDS in here, and Tyler converted the top drawer of the left dresser to a shelf with a hinged fold-out door, and it stores our video game consoles. 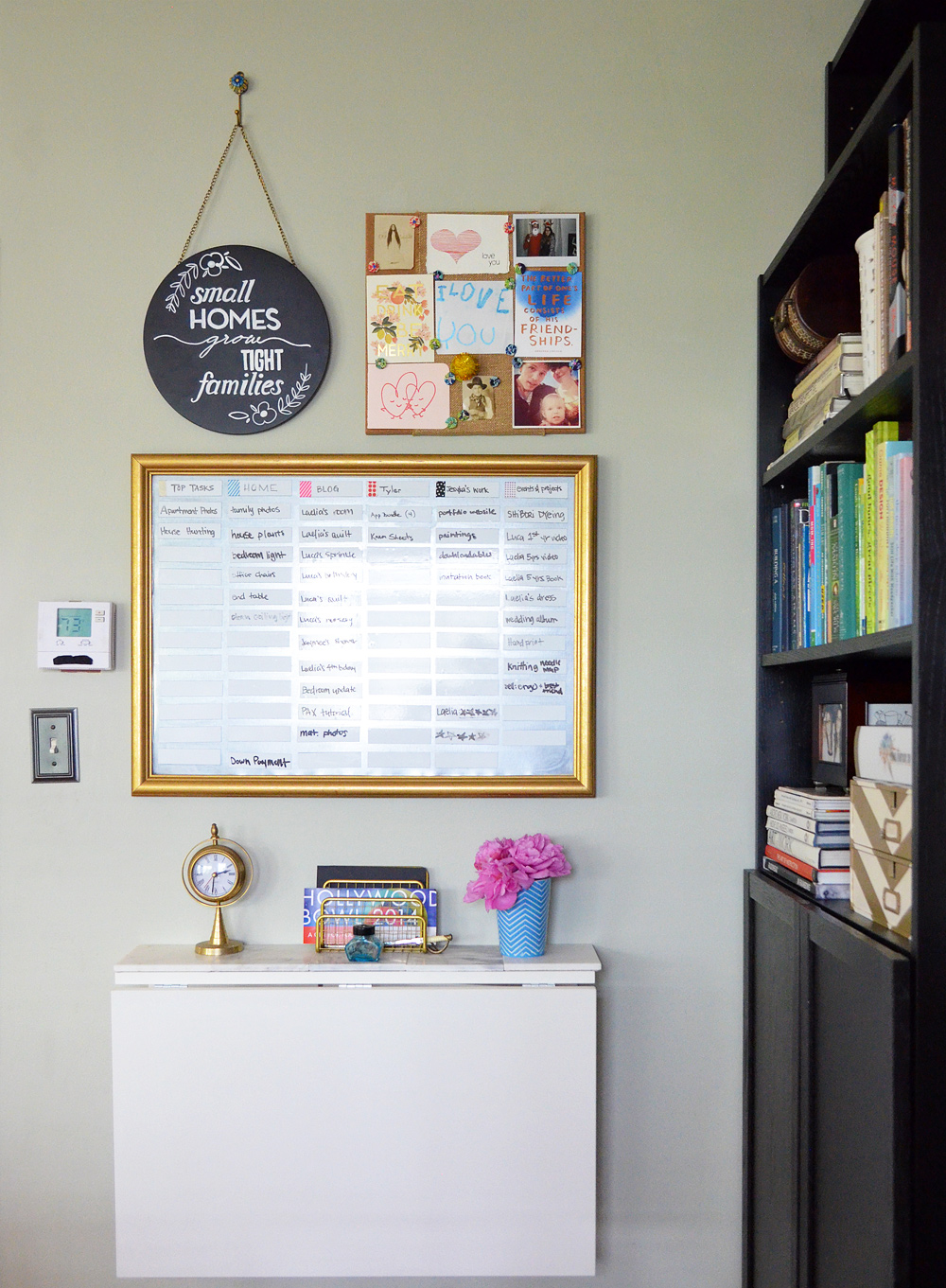 Tyler and I made this magnetic task manager for our family, inspired by YHL. We also put up the NORBERG fold out table from IKEA here, as an extra workspace if needed. The light switch is crooked, a fact that irks me daily! 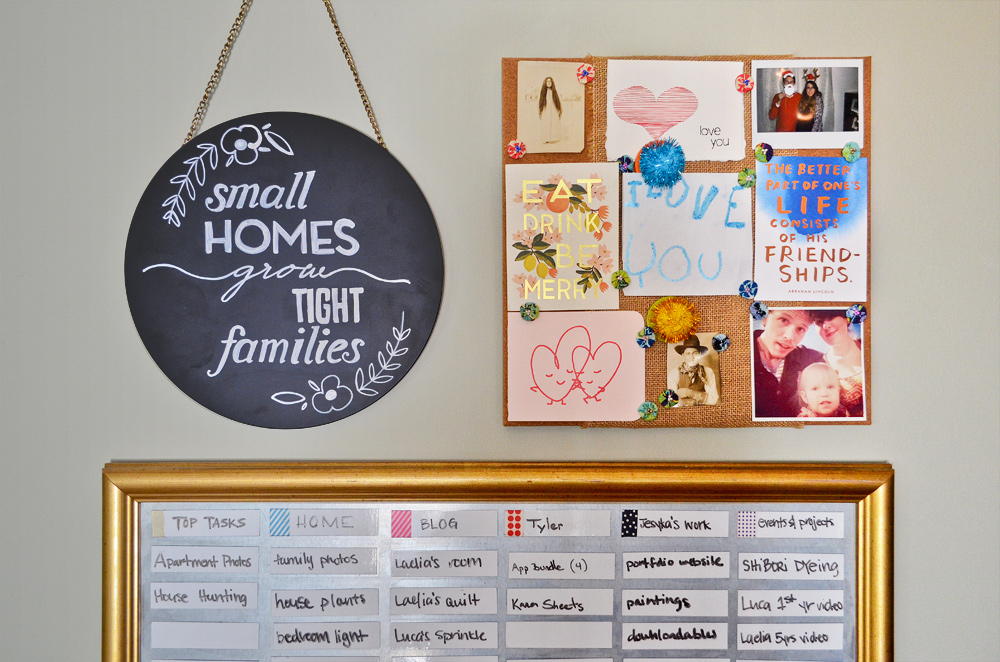 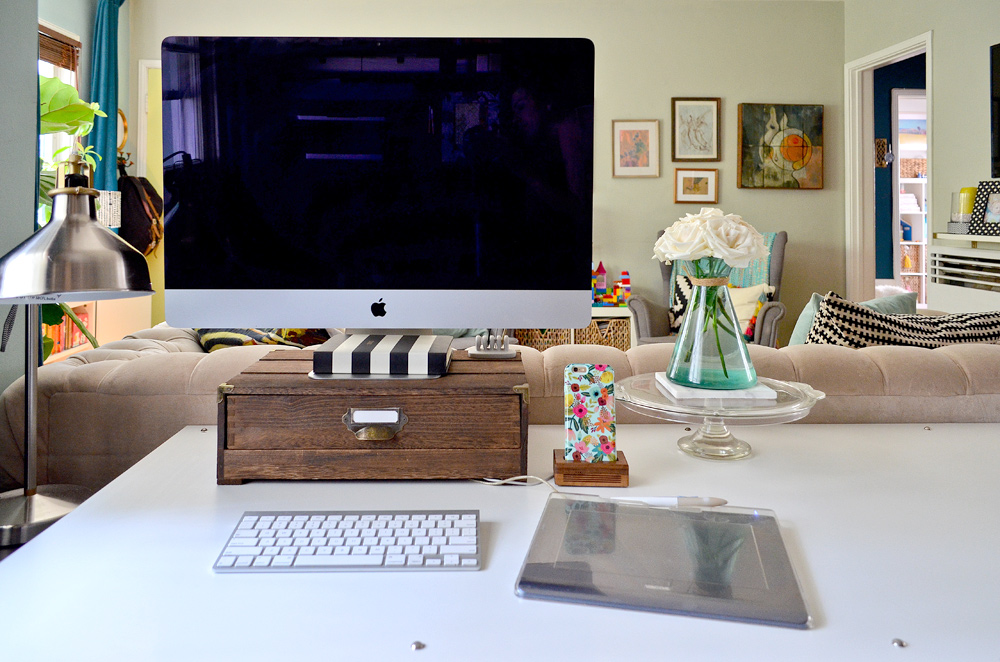 I wish a had a few more photographs to share, a few more vignettes and close up shots. The bookshelf cupboards are organized in a way that would probably be helpful to share; on the left are all of my crafting and fine painting supplies; the middle two are all fabrics (which are all folded around cardboard) sewing supplies, and my sewing machine; and the right cupboard is almost entirely paper (large format artist’s papers and an entire row of notebooks and sketchbooks). 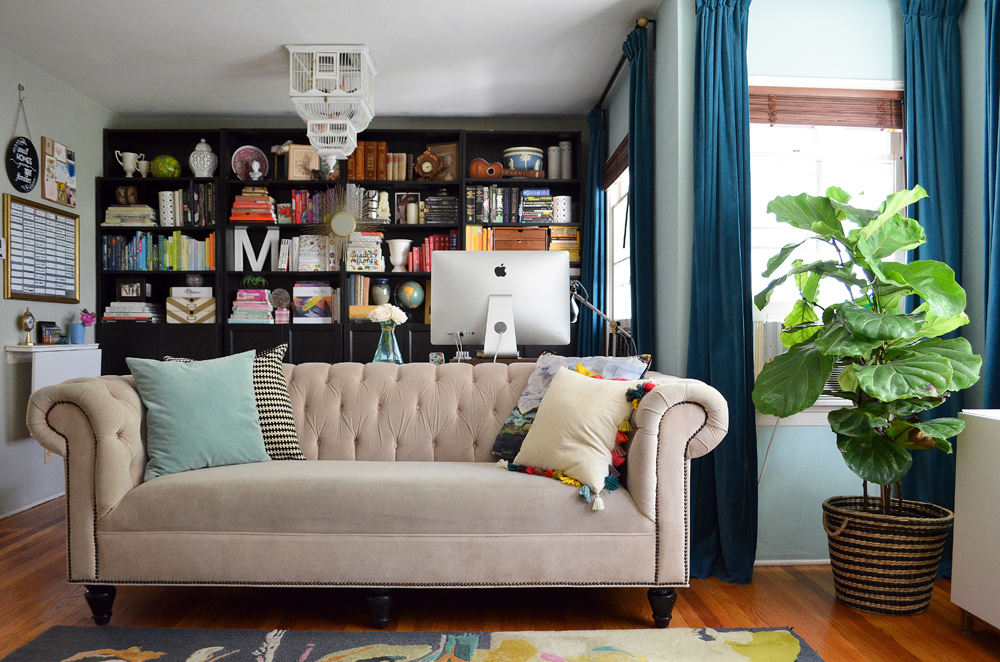 There is something very cathartic about looking at these photographs, and comparing them to old photographs. It is difficult to put into words–I am reminded of why I call my blog visual vocabularie—the juxtaposition of the old photographs of this space versus the newer photographs of this space say more about what has taken space in the amount of time that has passed between the photographs than I can put into words. Much life has been lived, mistakes have been made and learned from, new things have been tried and tested, moments of inspiration have come and gone, limits have been pushed, some ideas have been tried, and many others remain living on that “someday” pinterest board in my mind. I can say that I feel like this room is “done”. It took me seven years, but that is how I feel. Would I change things if I felt flippant about money or had a sudden and clear vision for something new? Perhaps. But as it is, I don’t feel as if the room needs anything different. It is about as comfortable, functional, and visually pleasing to us as it can get, I believe.

categories / Home Tour, Living + Workspace
Tags /
Warning: count(): Parameter must be an array or an object that implements Countable in /nfs/c04/h06/mnt/59434/domains/visualvocabularie.com/html/wp-includes/class-wp-comment-query.php on line 405