Our Bedroom and Nursery Combo

I am especially excited to write this post because the last post regarding the main bedroom was at the top of my blog for nearly a year and a half; I had absolutely no intentions of waiting so long between posts, and seeing that top picture and knowing how far that room had come since I posted it was especially irritating! If I had known it was going to be the first impression this blog gave off for almost 18 months, I would have preferred it to be something a bit more pretty or finished, like this post! :D 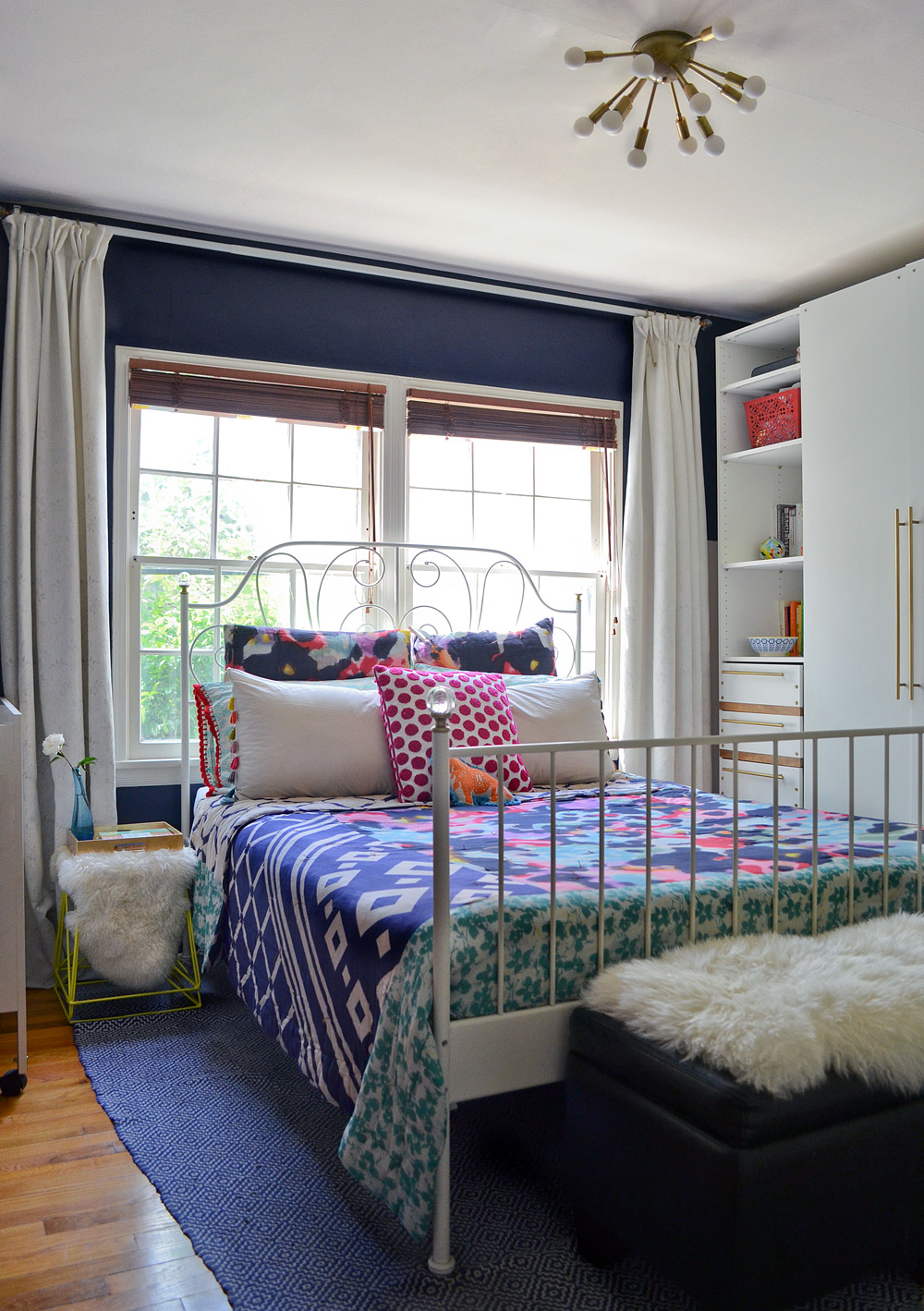 From the above angle, it doesn’t look too different from the last post. The biggest difference is the light fixture, which I’ve had my eye on for years! It is from Lucent Light Shop, and I highly recommend them. Great quality, great prices, and great customer service! You seriously can not ask for much more! I consider this sputnik lamp to be the little jewel that tops off the whole bedroom. 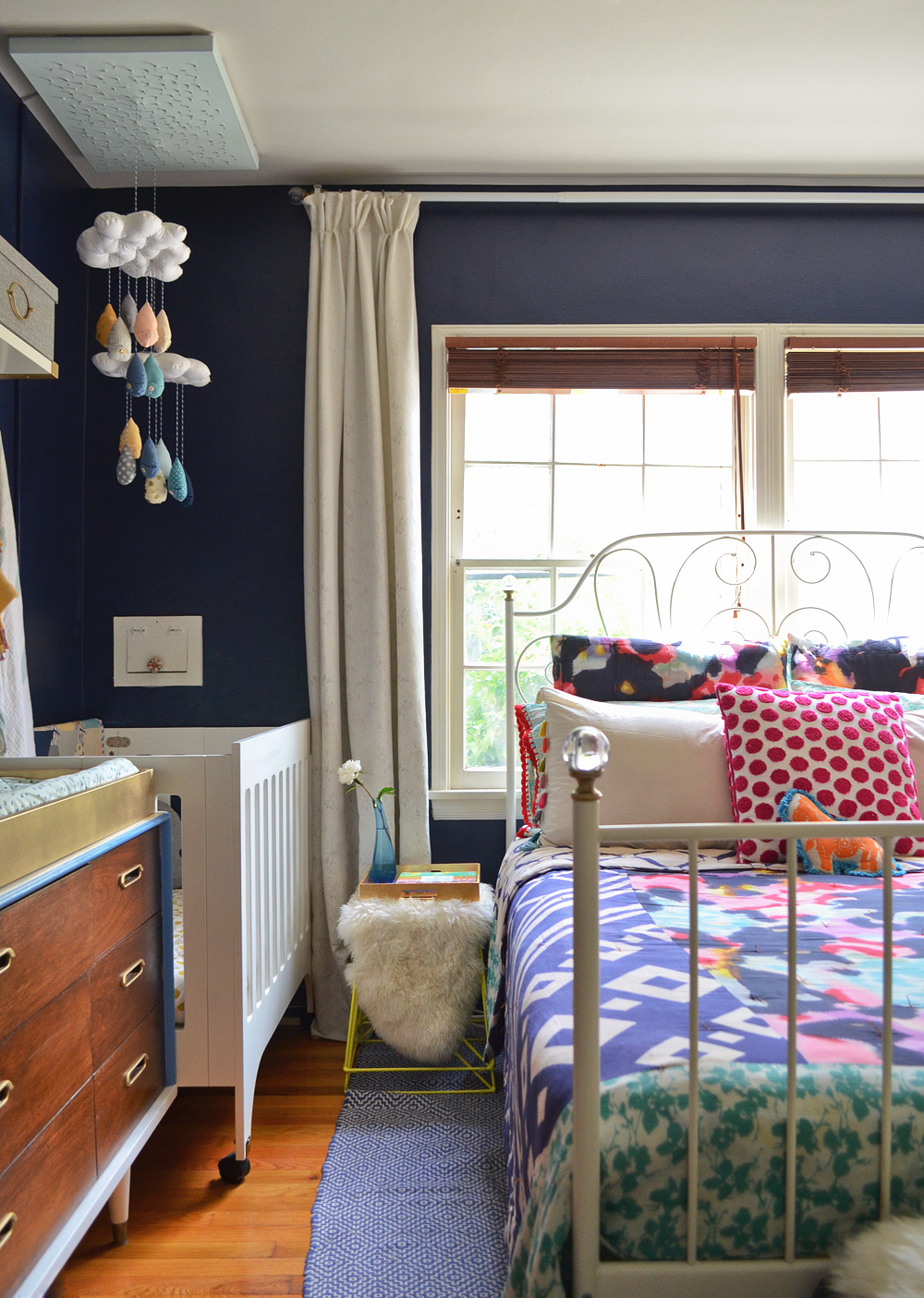 Next, we have the little nursery corner that we made for Luca. As I mentioned in the living + workspace update, Luca is sharing a room with us for now, instead of with Laelia, because babies really don’t need their own space until they are a bit older; I knew he’d be in our room more than his own room, so it just made sense to go this route, especially when we discovered that a mini crib would fit in our room. There might not be any breathing room between our furniture (which is usually a big no-no in my book), but it was our best option and it works! 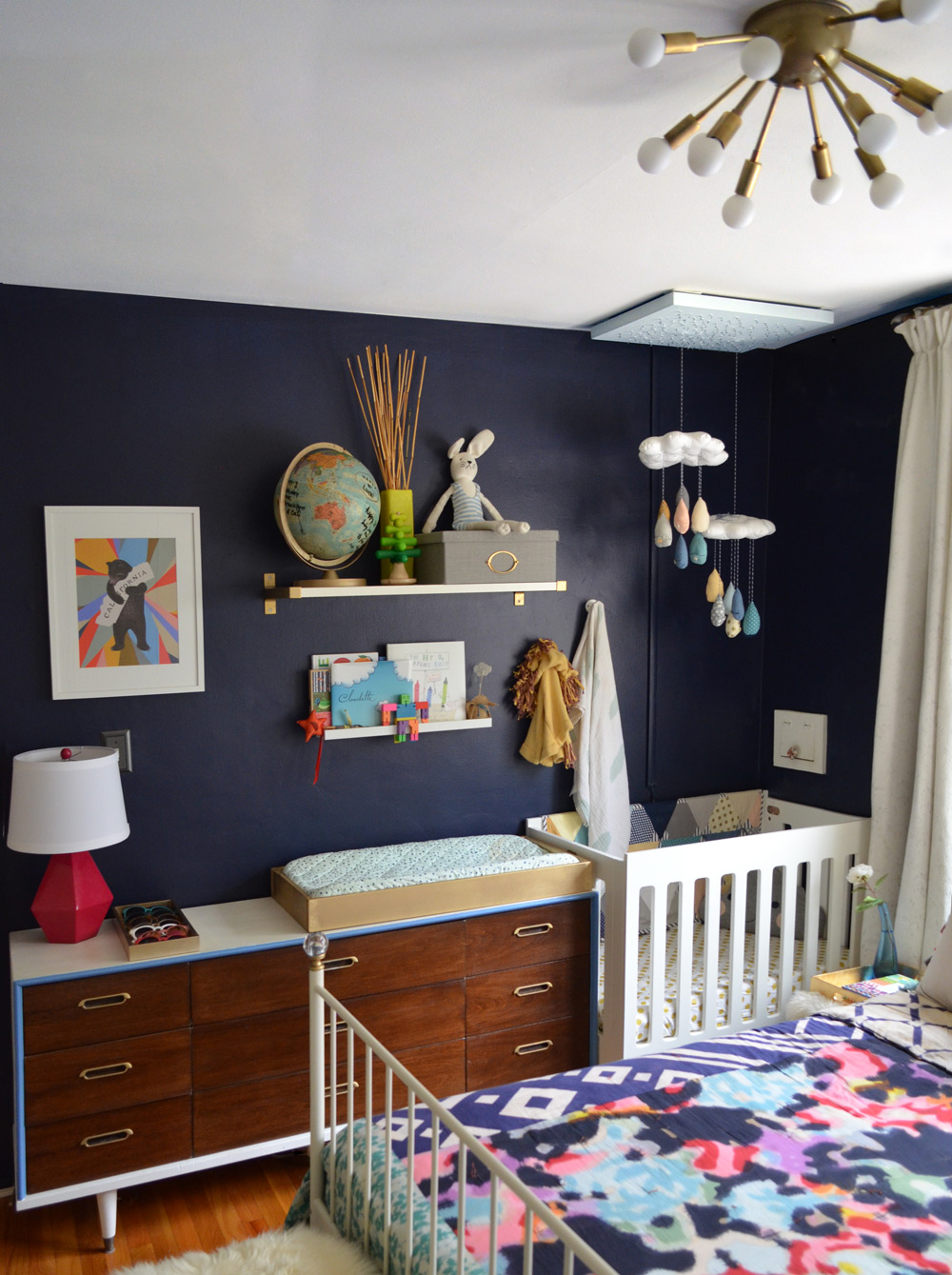 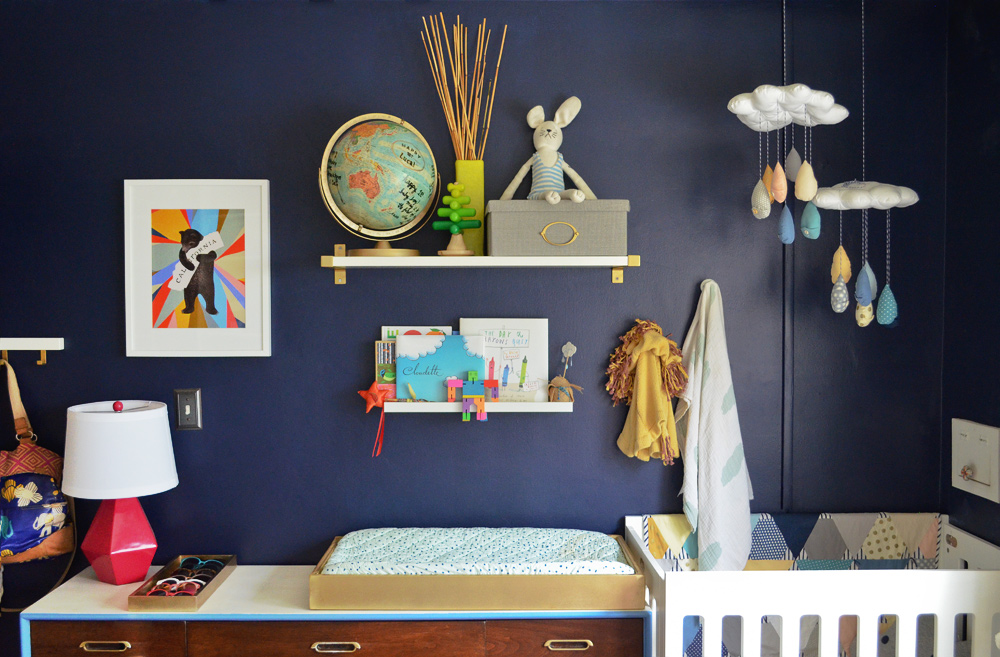 I’m so happy to report that we finally stripped and stained the drawers of this old dresser. I bought the dresser in 2001 for $40, not really knowing what it was, and I \ put so many layers of paint on this thing… but stripping it was really not a big deal at all. I would love to do the whole thing, but the top is very damaged with chunks of missing wood and water stains that you can still see through layers of paint that I think paint might just be the best option for it. I painted the little blue strip to be a neat pop color, but I’m not sure of it; it will probably change color. I sold our old changing table to a friend because we just didn’t have room for it anymore and her old changing table was very large, so it worked out for us both. One thing I liked about our old changing table was the little box that held the changing pad, so I had my dad build one for us really quick, and after WAY too much debate, I finally just spray painted it gold, and it looks fine. The changing pad is from Land of Nod. This dresser will probably become Luca’s dresser, and live with him in his room when he’s older. 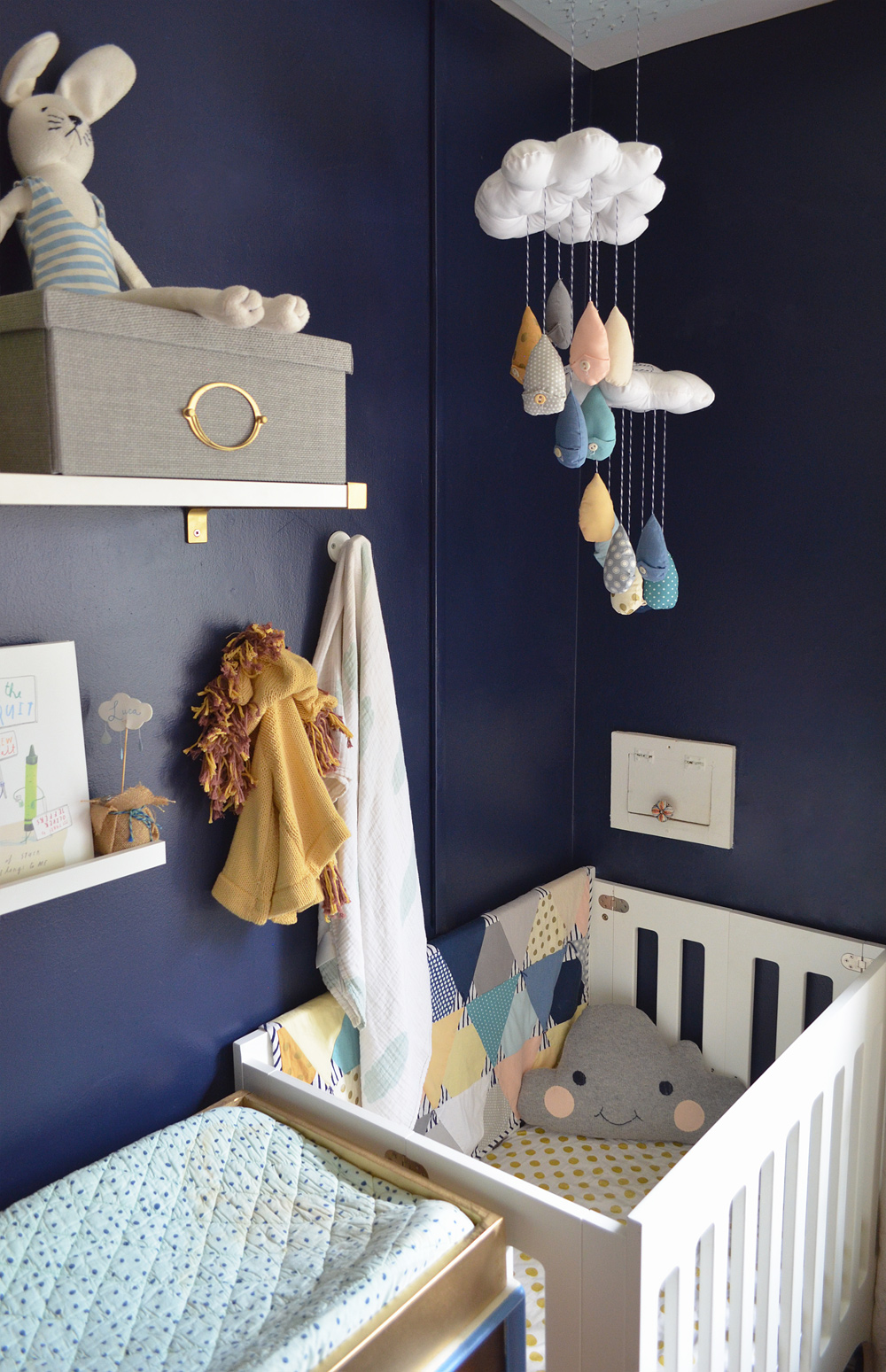 When it was decided that Luca would be in our room, we knew our old crib would not fit. After some research, I settled on the babyletto grayson mini crib. It has since been replaced by the origami mini crib, but I like the lines of the grayson crib better. This crib is heavy tho, and the origami is supposed to be much lighter. Anyway, we love it. It was especially great when he was a tiny baby and would actually sleep in his crib! It was so great to not even have to take a step to pick him up and nurse him in the night. He just felt so safe and comfy right next to the bed. Of course, just like his sister, the second we had to lower the crib mattress, he stopped sleeping in the crib. His eyes pop open the moment you lower him below your hip. I don’t know what it is! So hopefully he’ll start sleeping in there again soon… Laelia began to sleep in her crib again around 2 yrs, which is very normal. 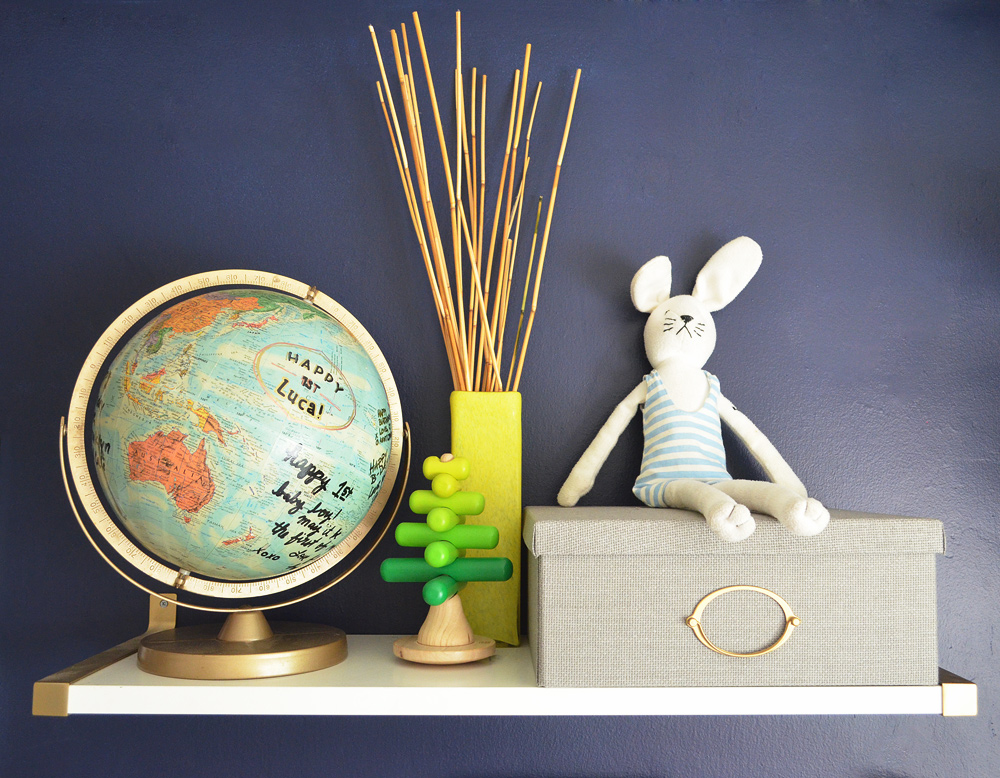 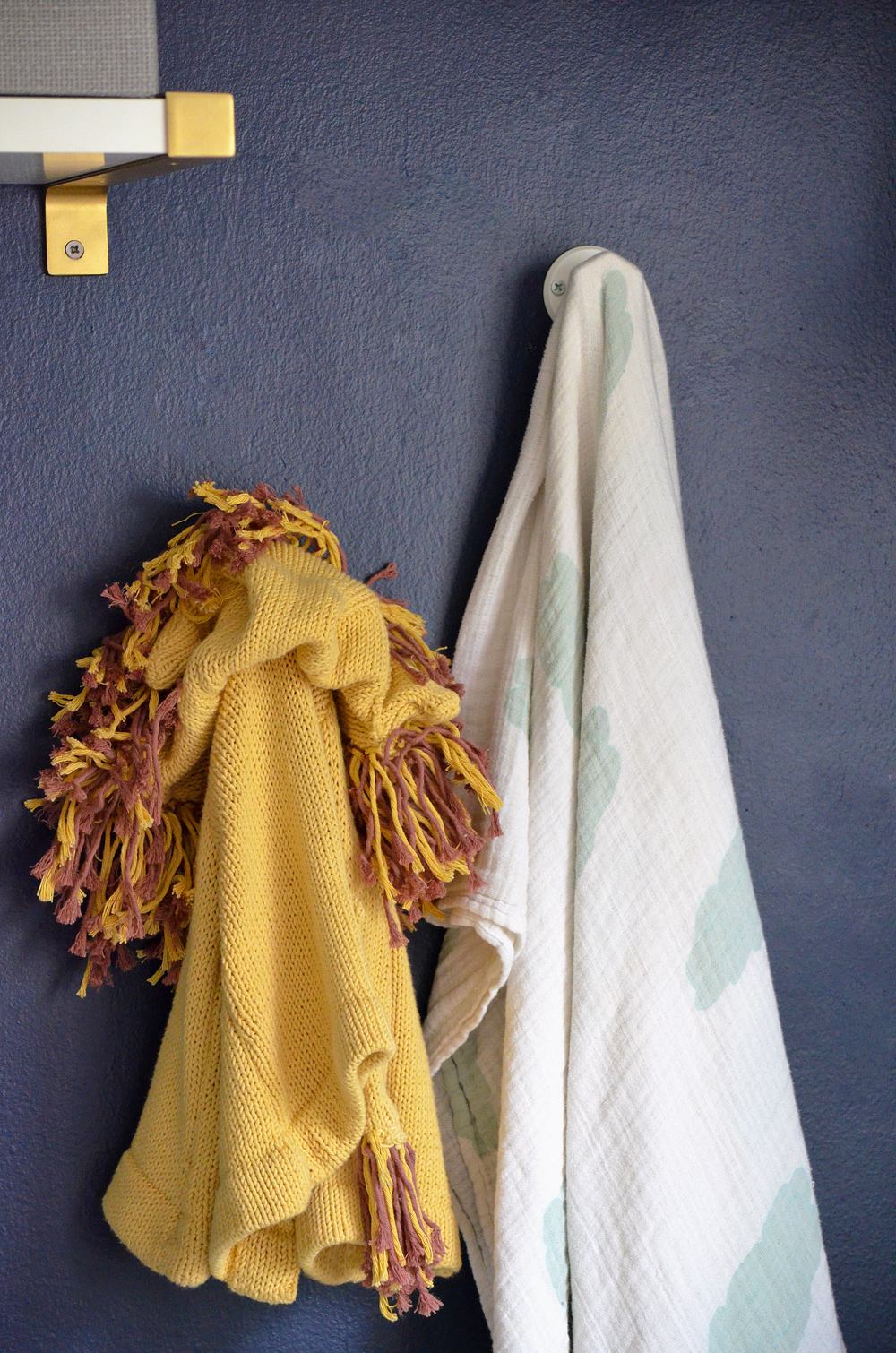 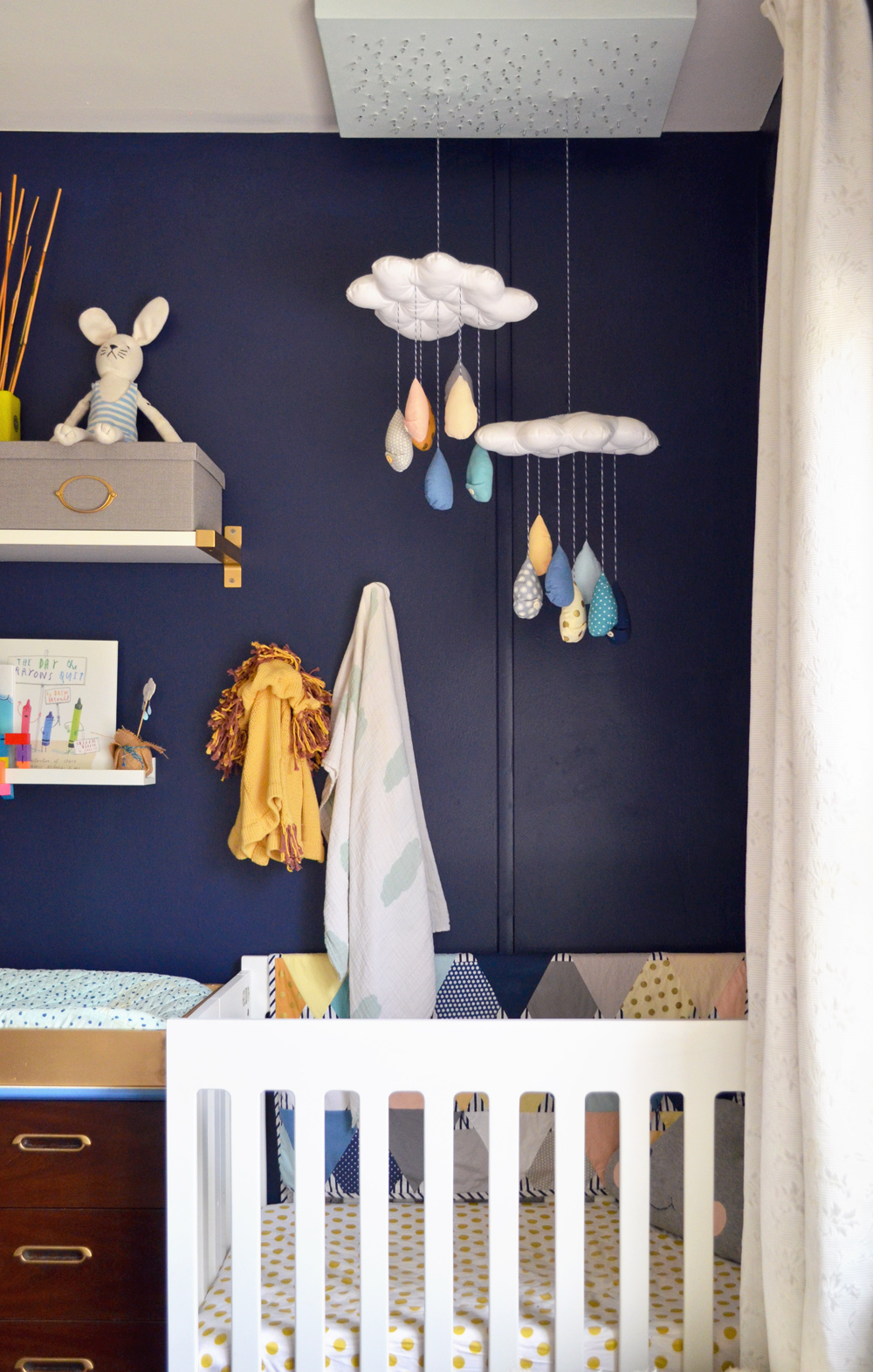 Clouds have always been a favorite motif of mine, and so I knew pretty early on that this was the direction the nursery was going to take. I also knew we needed a light on this side of the room, what with the changing pad taking up the space where I’d normally put a second light. In one of those strange middle-of-the-night light-bulb-over-the-head moments, this idea came to me. I took an old canvas, 200 white christmas lights, some fabric and stuffing, and whipped up this cloud mobile. The cords run behind the crib and up the wall, and we covered them with a cord cover and painted it to match the wall. There is an on/off switch that is connected to it which is at the side of the bed, so it works as a perfect night-light, which was especially great for middle of the night diaper changes! My biggest wonder was how to hang it; after some discussion w/ my dad, he said the best way to hang it would be industrial strength velcro! I thought that was a little weird, but he said that the only way it would come down would be if the ceiling itself came down. My aunt told me they use it to velcro down printers and fax machines in their trailers on movie sets! Anyway, we stapled the velcro, just incase it got too hot and the glue started to come undone as an extra precaution, and it works AMAZING. Tyler practically has to hang on it to get it down. 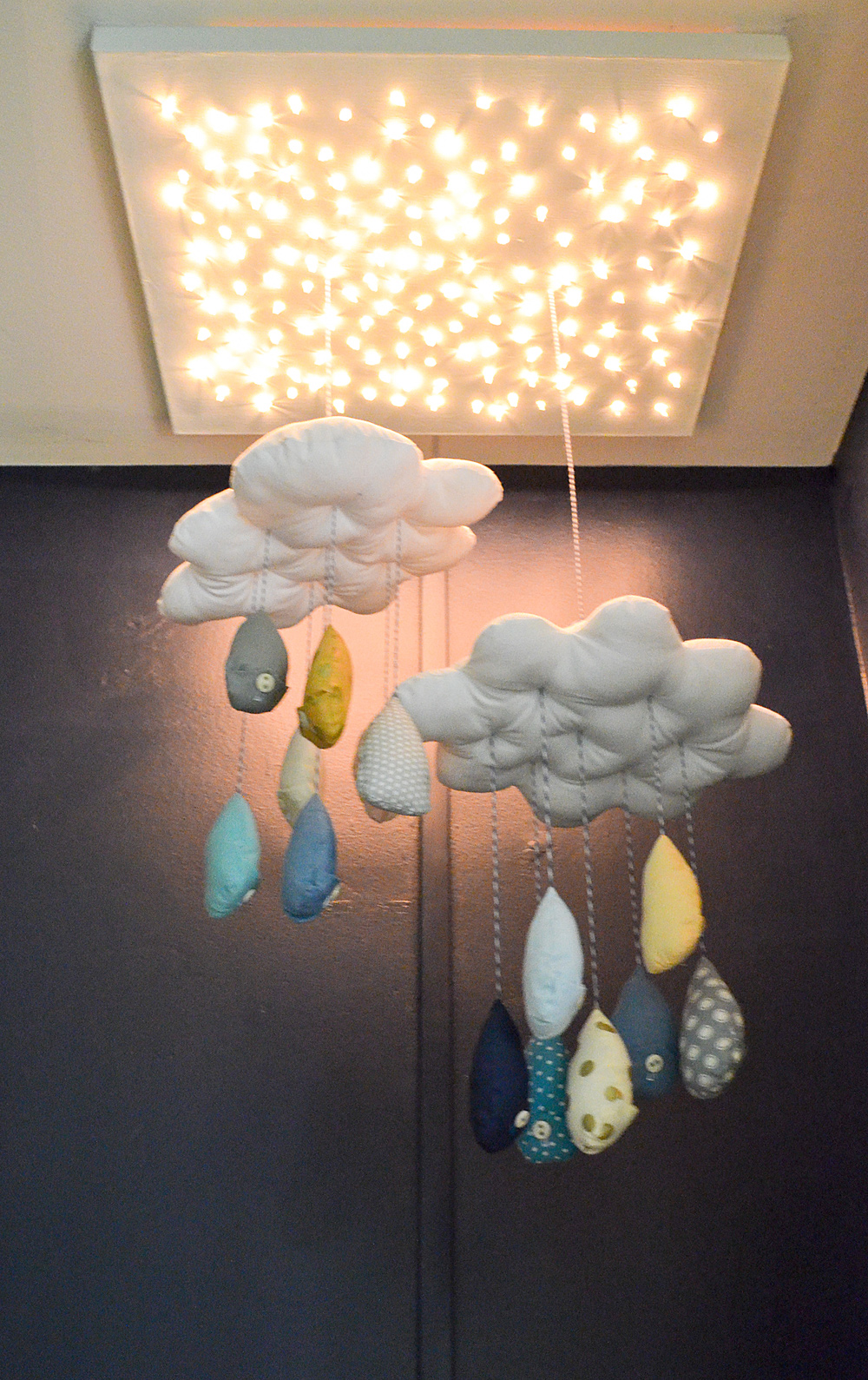 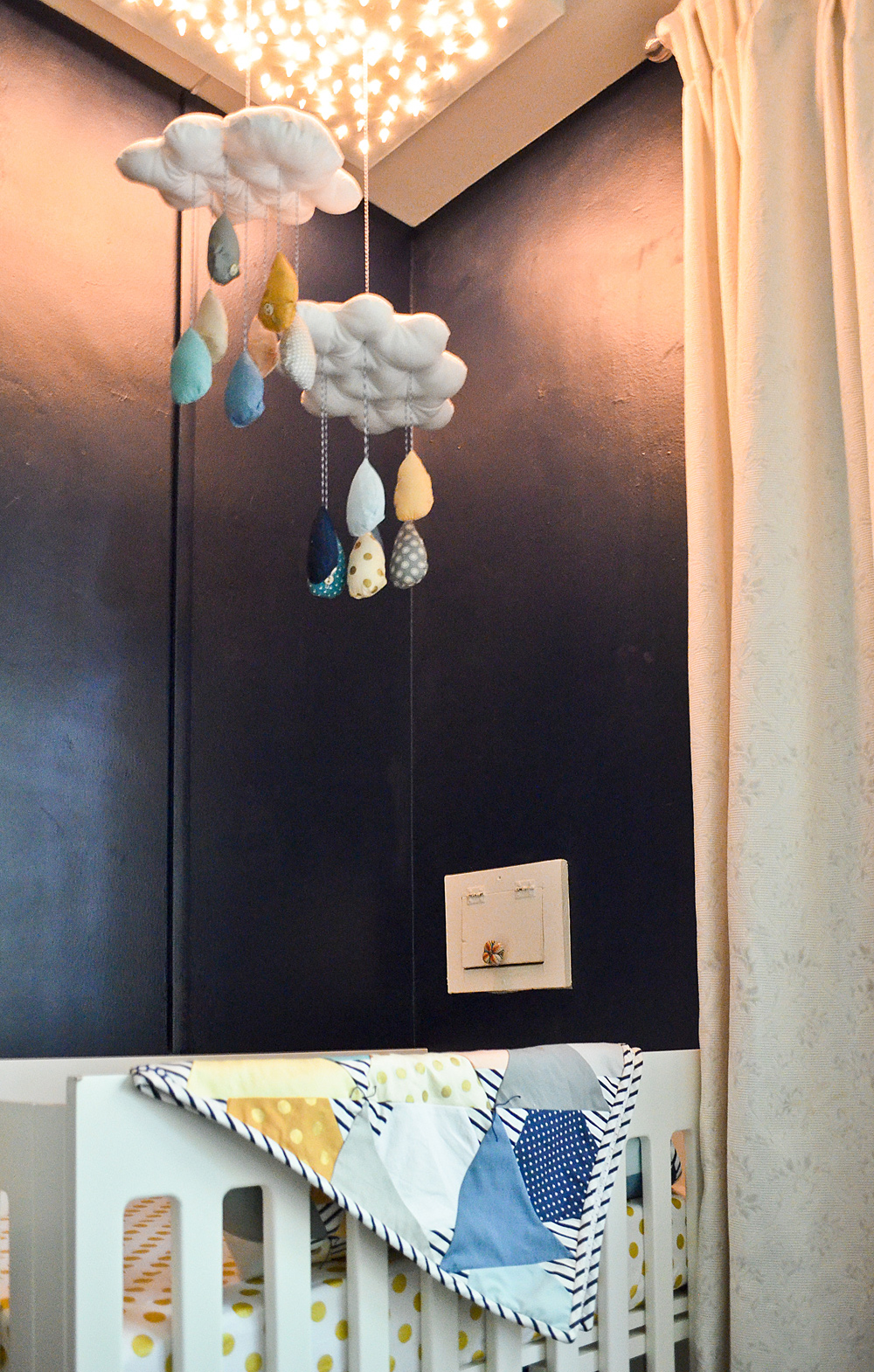 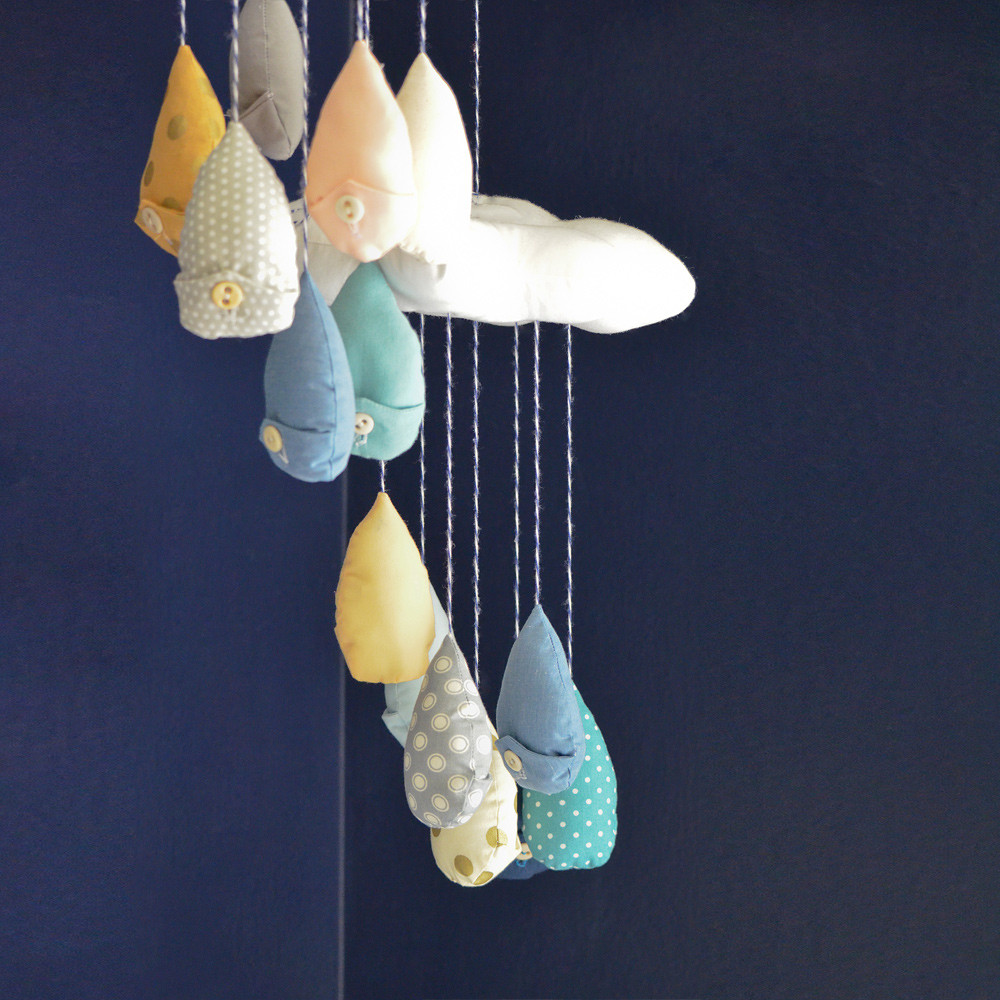 For added fun, Beth came up with the idea have people add little notes and stuff them inside the rain drops at Luca’s baby sprinkle. I haven’t read them yet, but when he’s old enough, we’ll open them and read them together. 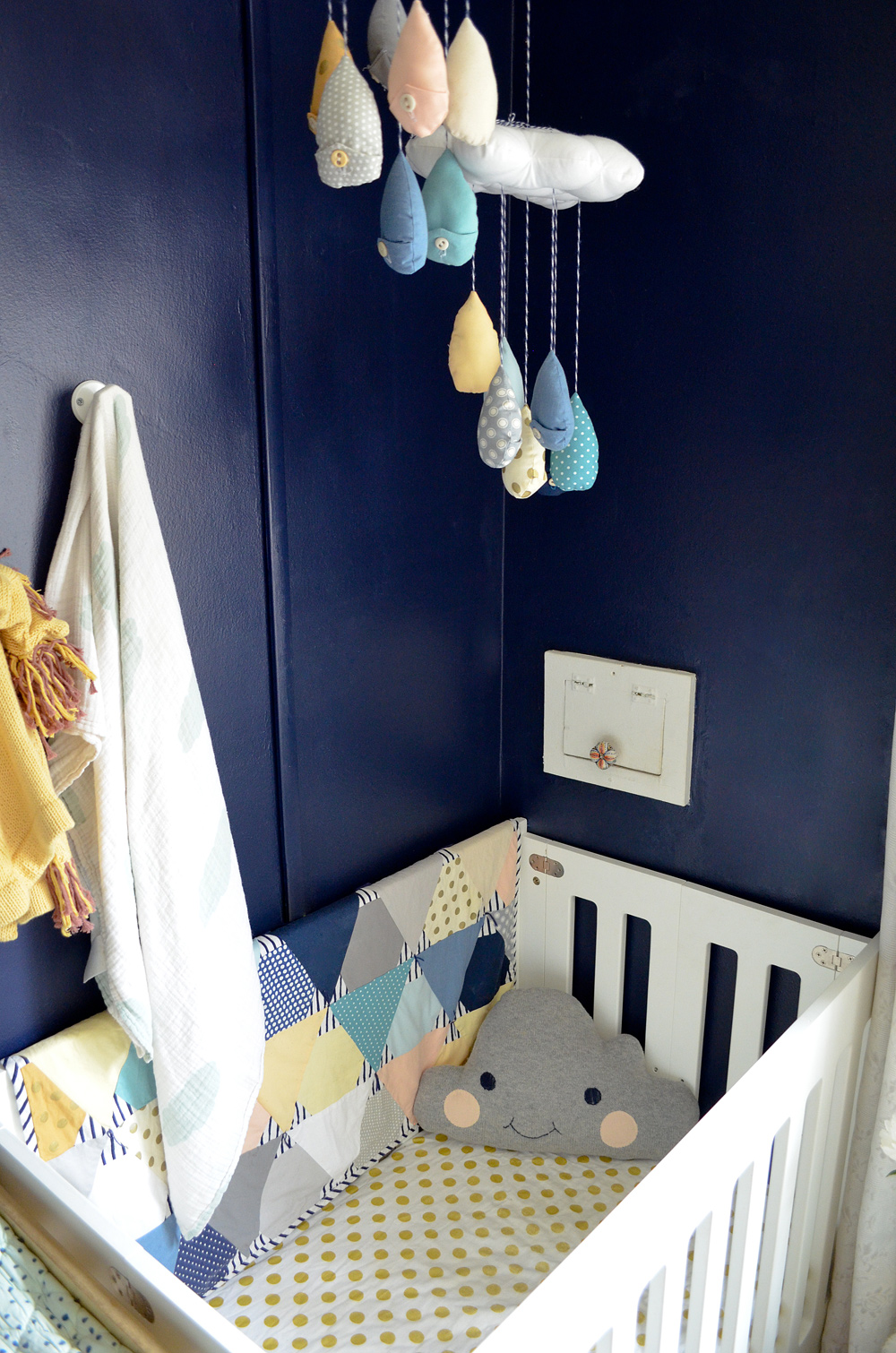 I also made his quilt and this little cloud pillow. I agonized over the quilt for a while, thinking I should come up with a new pattern…  I really loved the pattern I designed for Laelia’s twin quilt, so I just used that pattern, but in a very different colorway and I’m very happy with it! I’d really like to sell the pattern on this site at some point. The cloud pillow I made using an old cashmere sweater and another pattern of my own design. I finished up the eyes and cheeks the day he was born! 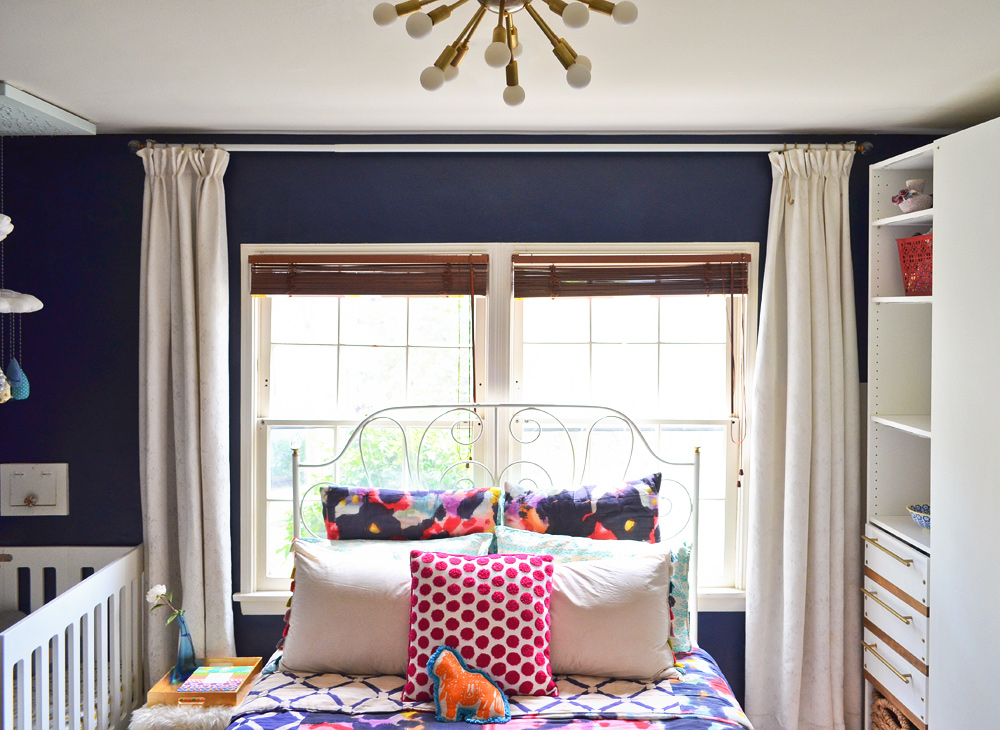 The next big change from the last post is that we finished the drawer fronts on our PAX wardrobes. Because I wanted some of the PAX to have open shelving, we had to get creative about creating drawer fronts on the wardrobes. PAX does not have finished drawer fronts for their drawers because they assume either the units are inside a closet or behind a door. So we bought 6 kitchen drawer fronts which were the right width, but not the right height, and used straight brackets to attach some 2 x 1 wood that we stained, and then used brass screws and grommets to make it a little more decorative. It’s pretty cool, really! I have all the photos to do a how-to post, I think, but not necessarily the time to compose it… but if enough people clamor for it, I might be motivated enough to do it! 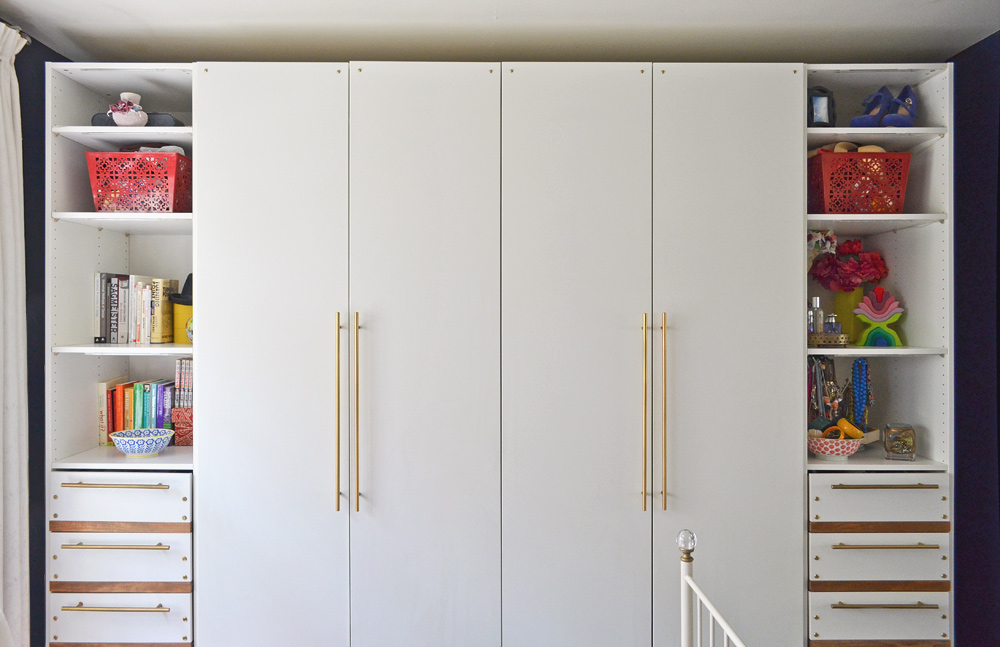 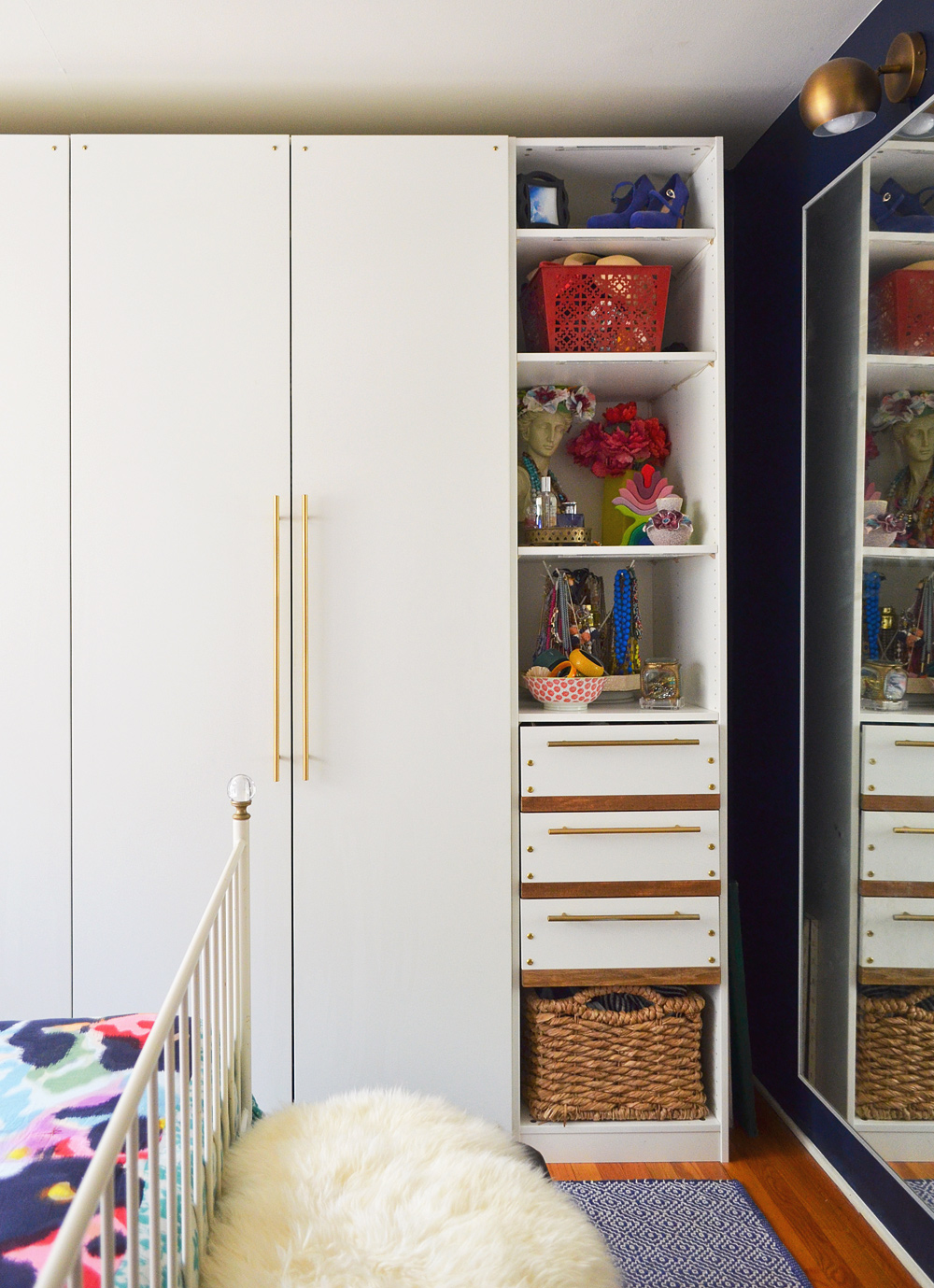 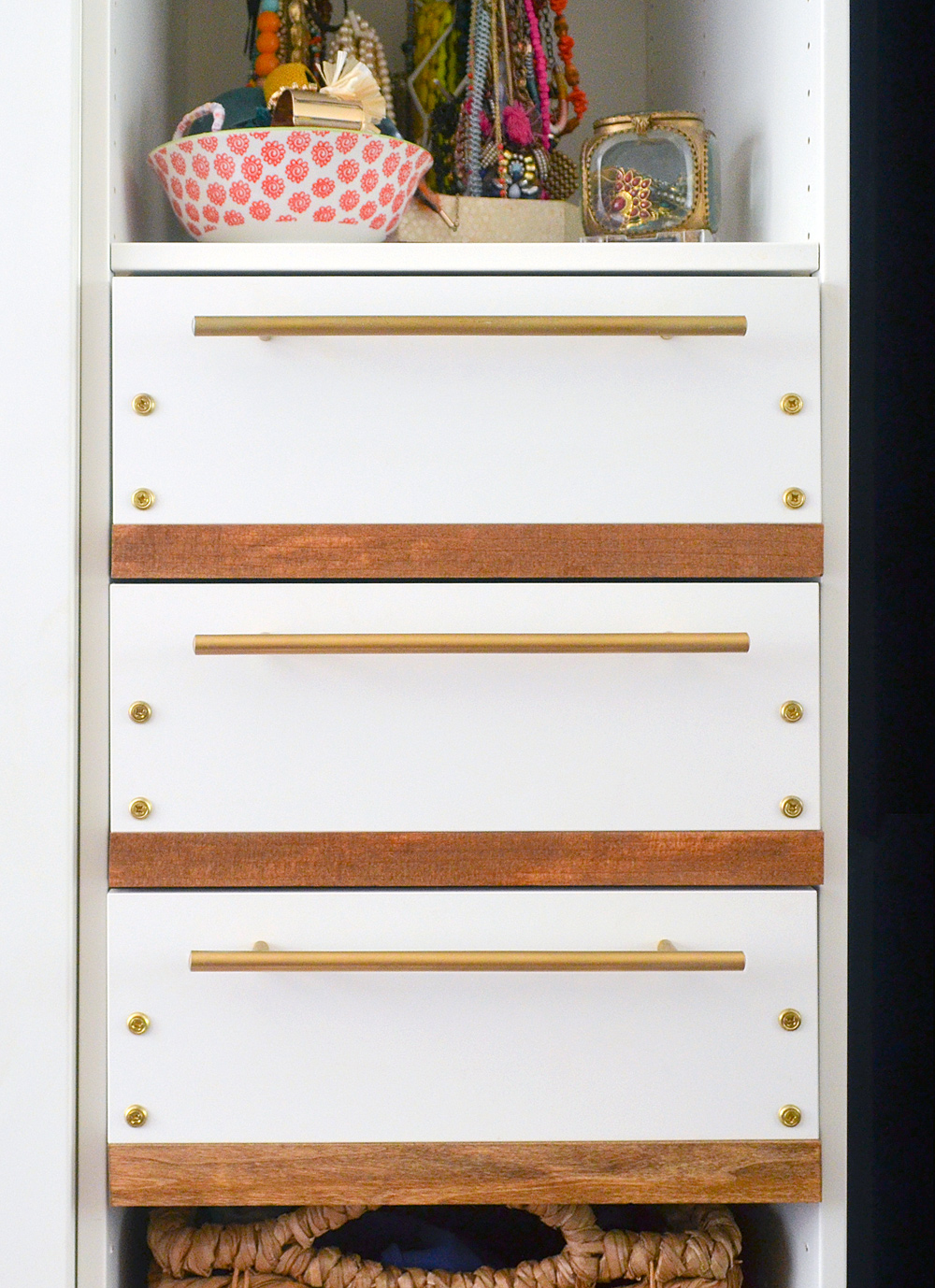 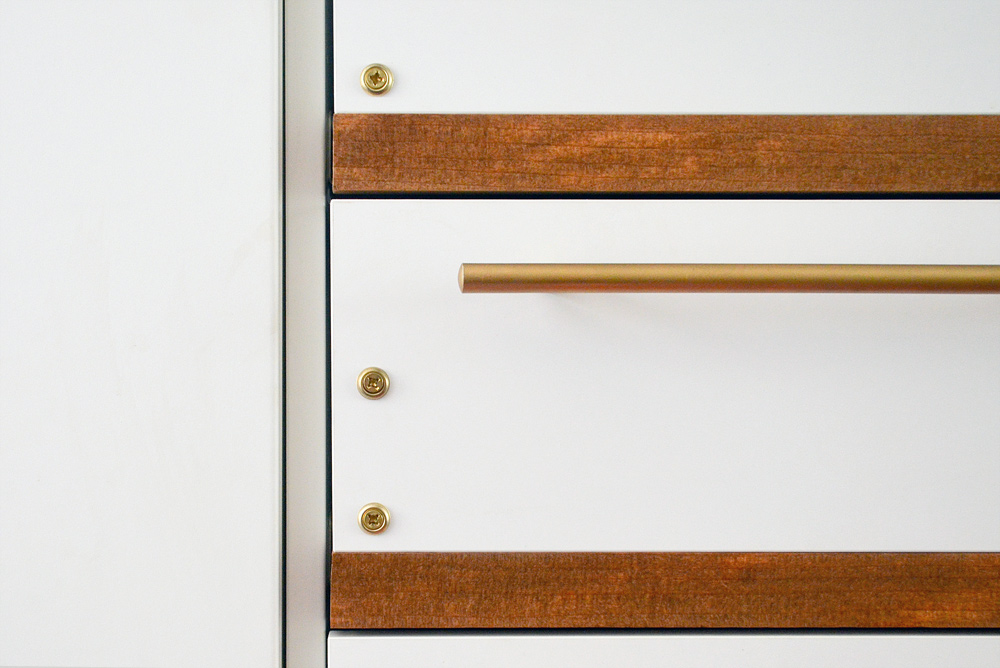 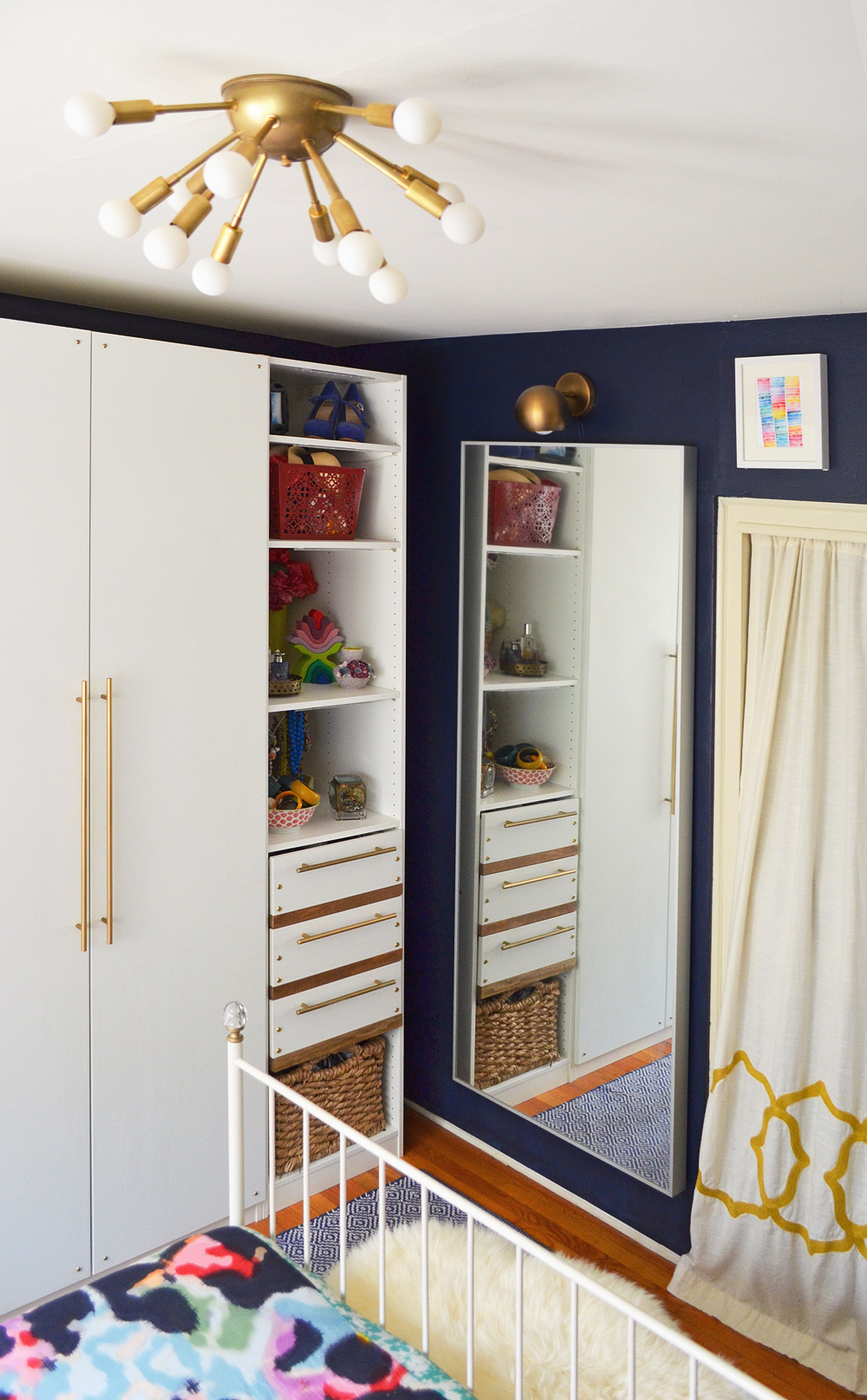 I did the little trick with painters tape and paint to cover the cord for the light above our mirror. You can barely see it. It is the best way to cover cords where only a little of the cord is showing! I also got curtains from Target for our closet. 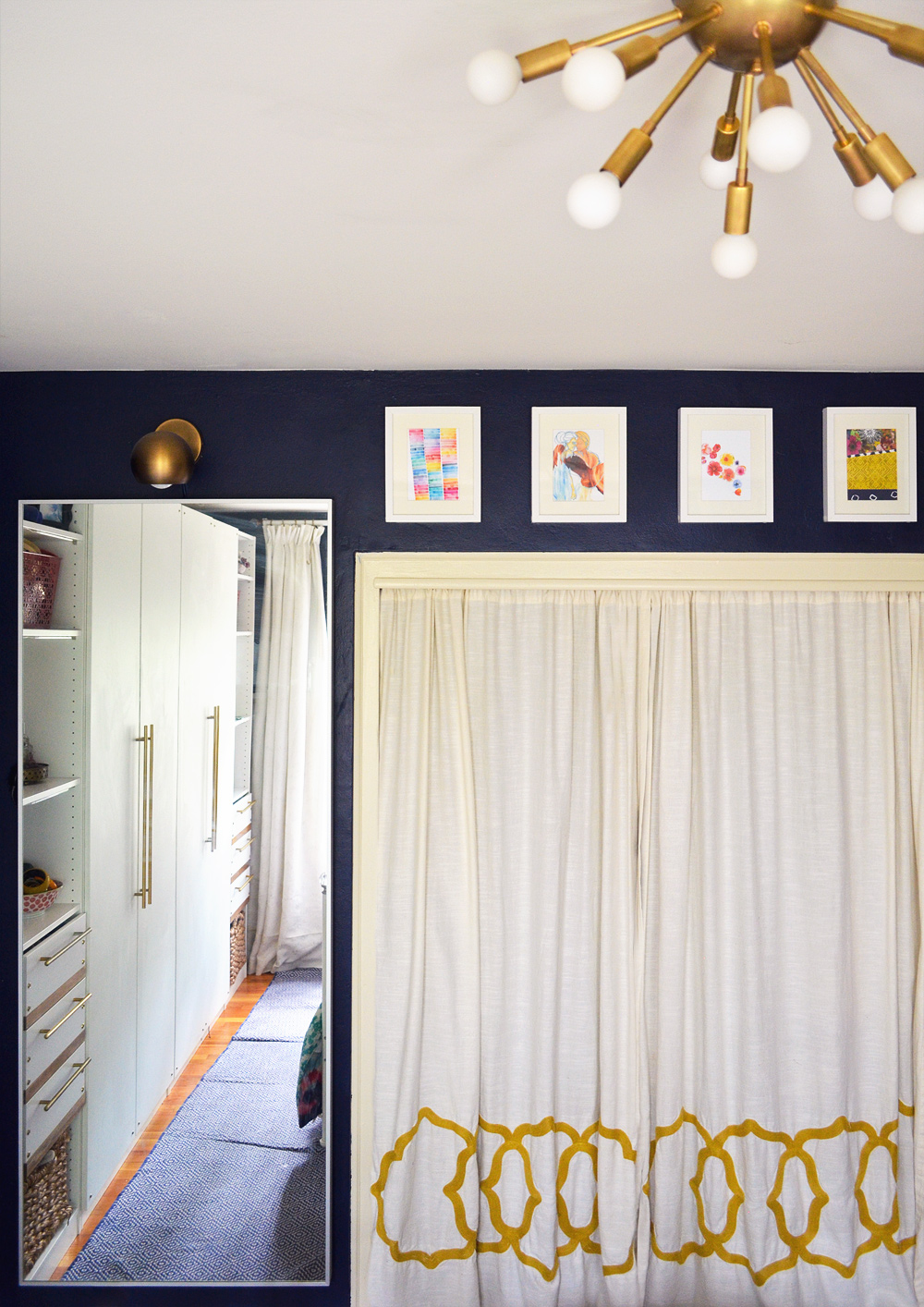 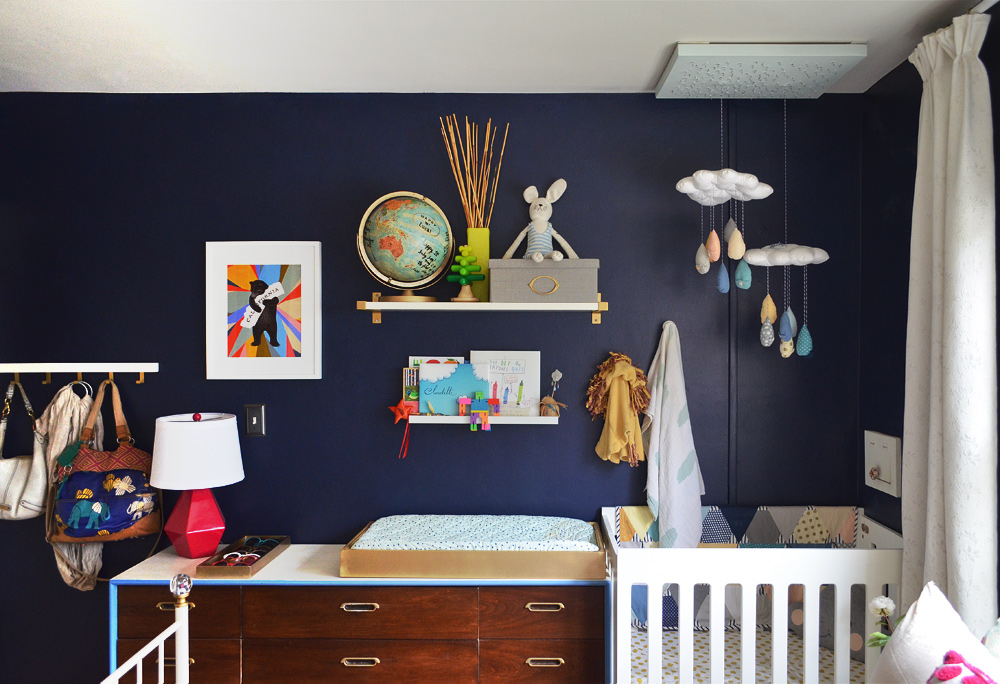 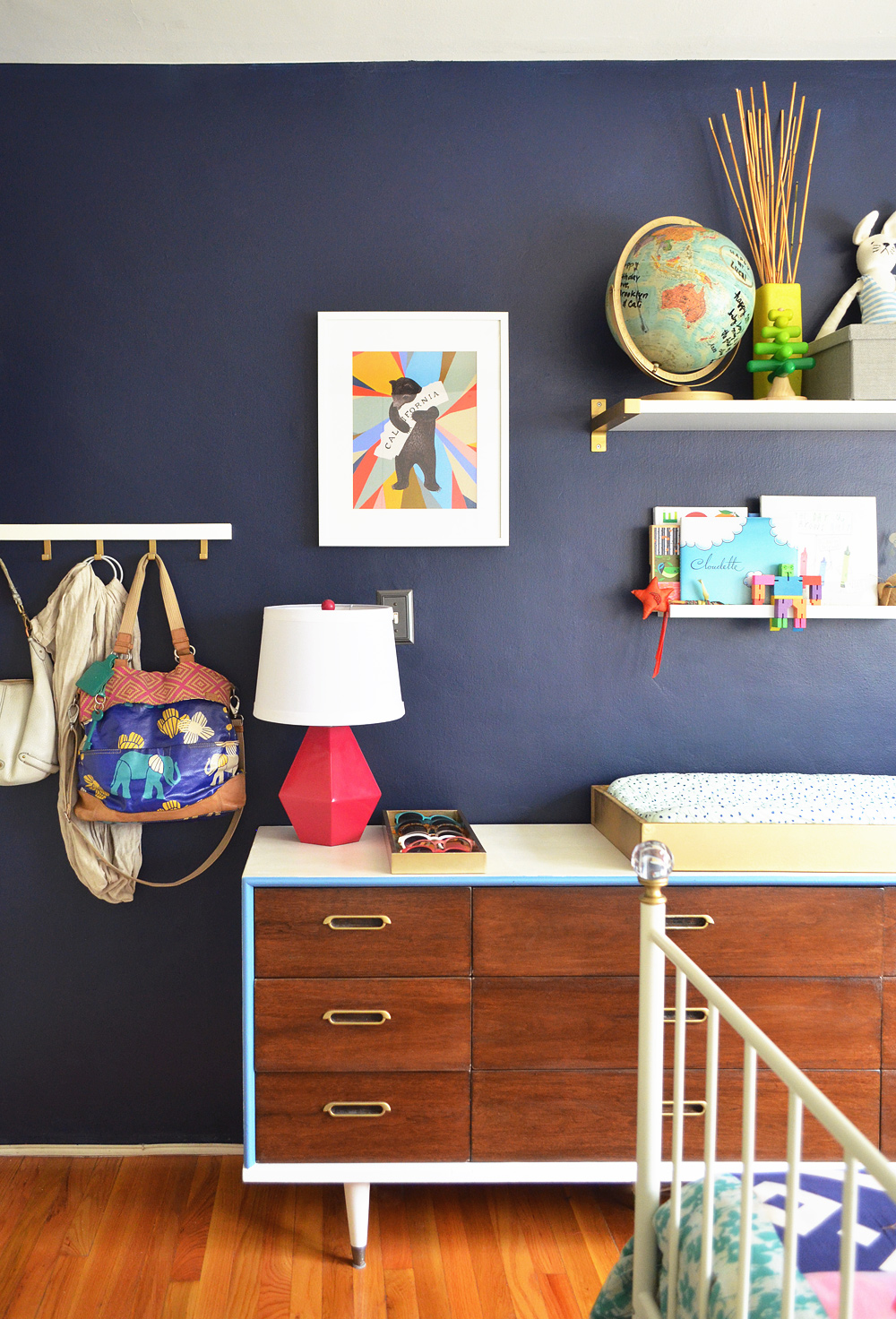 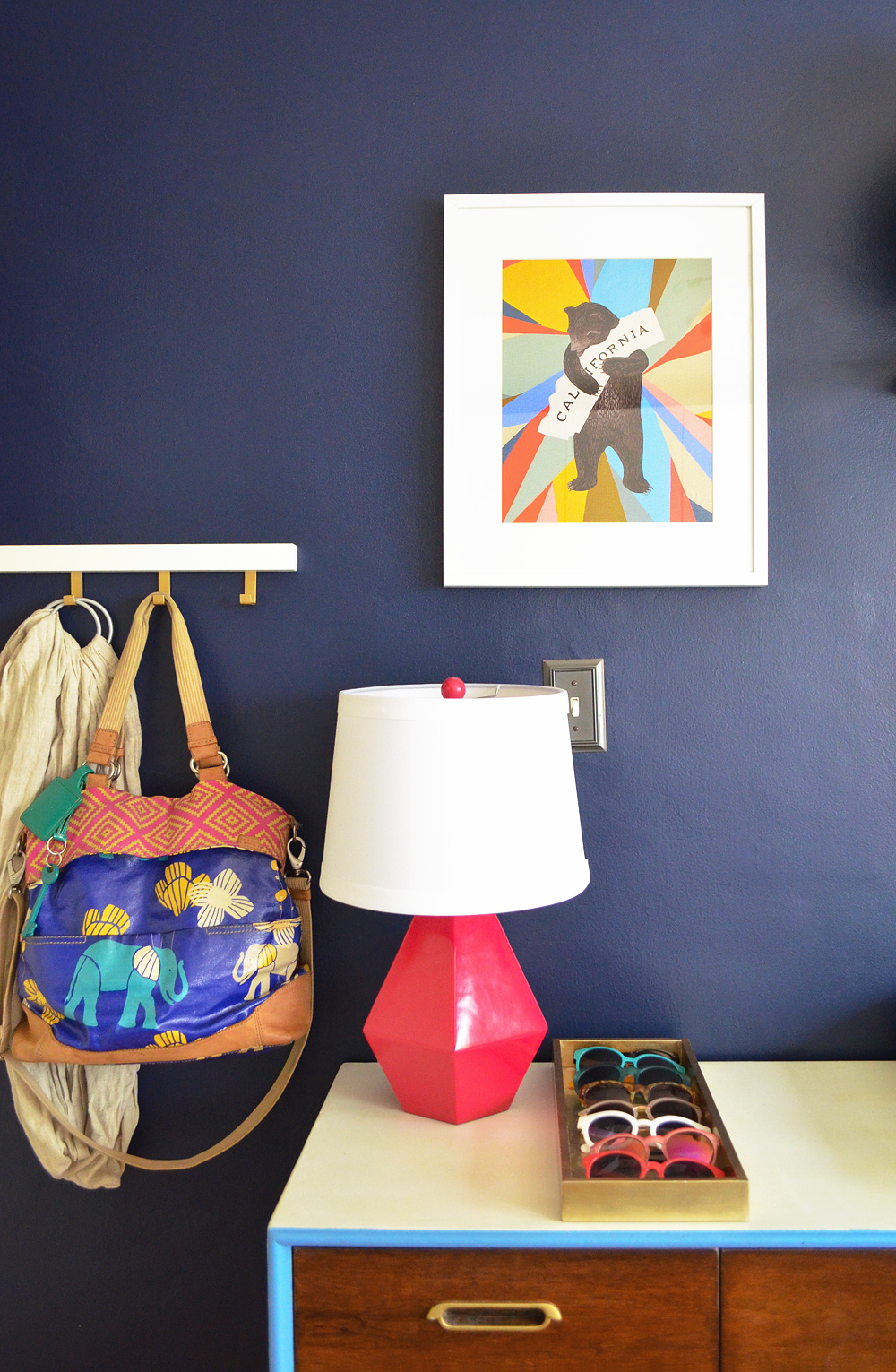 I switched out the old lamp we had here for this fun lamp from Lamps Plus. Not sure if I ever mentioned it here (my memory is fuzzy after the very long break), but Tyler works at Lamps Plus corporate as a Senior Front End Software Developer–this is the first purchase we have made, but I’m pretty sure it won’t be the last! 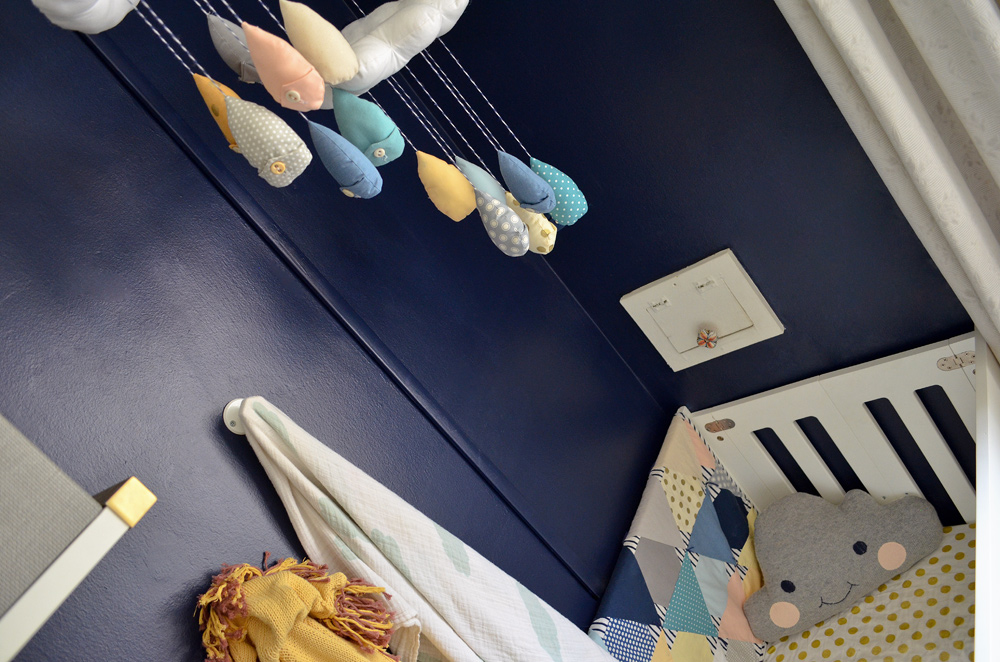 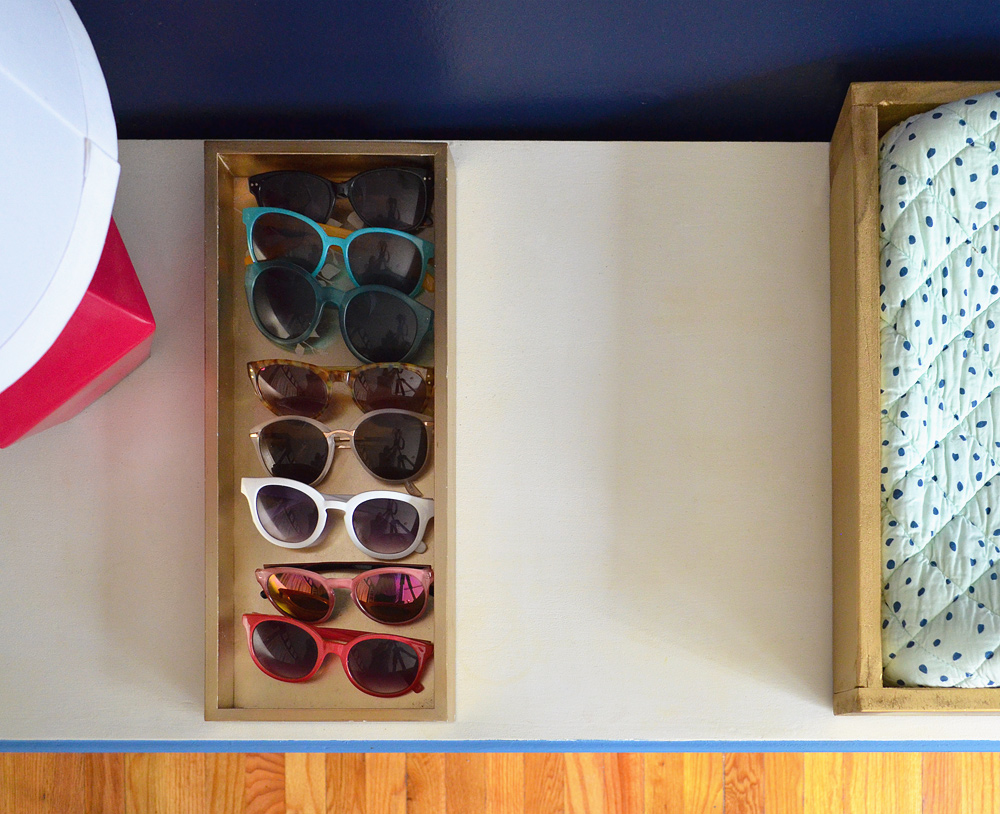 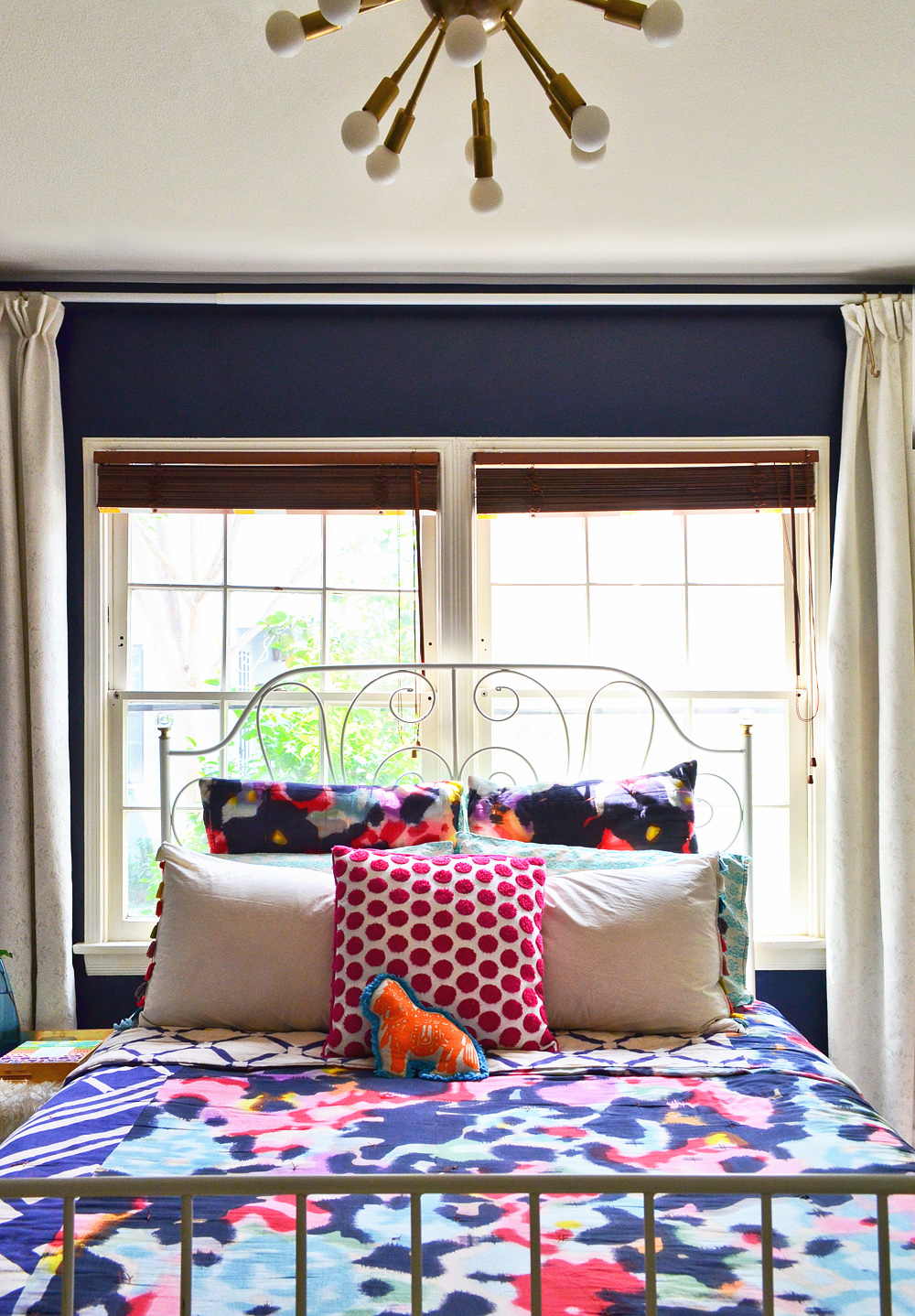 This is how we managed to have a simple, beautiful nursery space that I think sits well with the rest of our 145 square foot “master” bedroom! It really is a monster of a post when I think about how I could have broke it down; Luca’s corner nursery, the wardrobe hack, the mobile DIY, the design and sewing of the quilt, the cloud pillow pattern, the midcentury dresser makeover… It was my original intention to post all of these things separately but something is better than nothing! :)