Party Monster; a birthday board 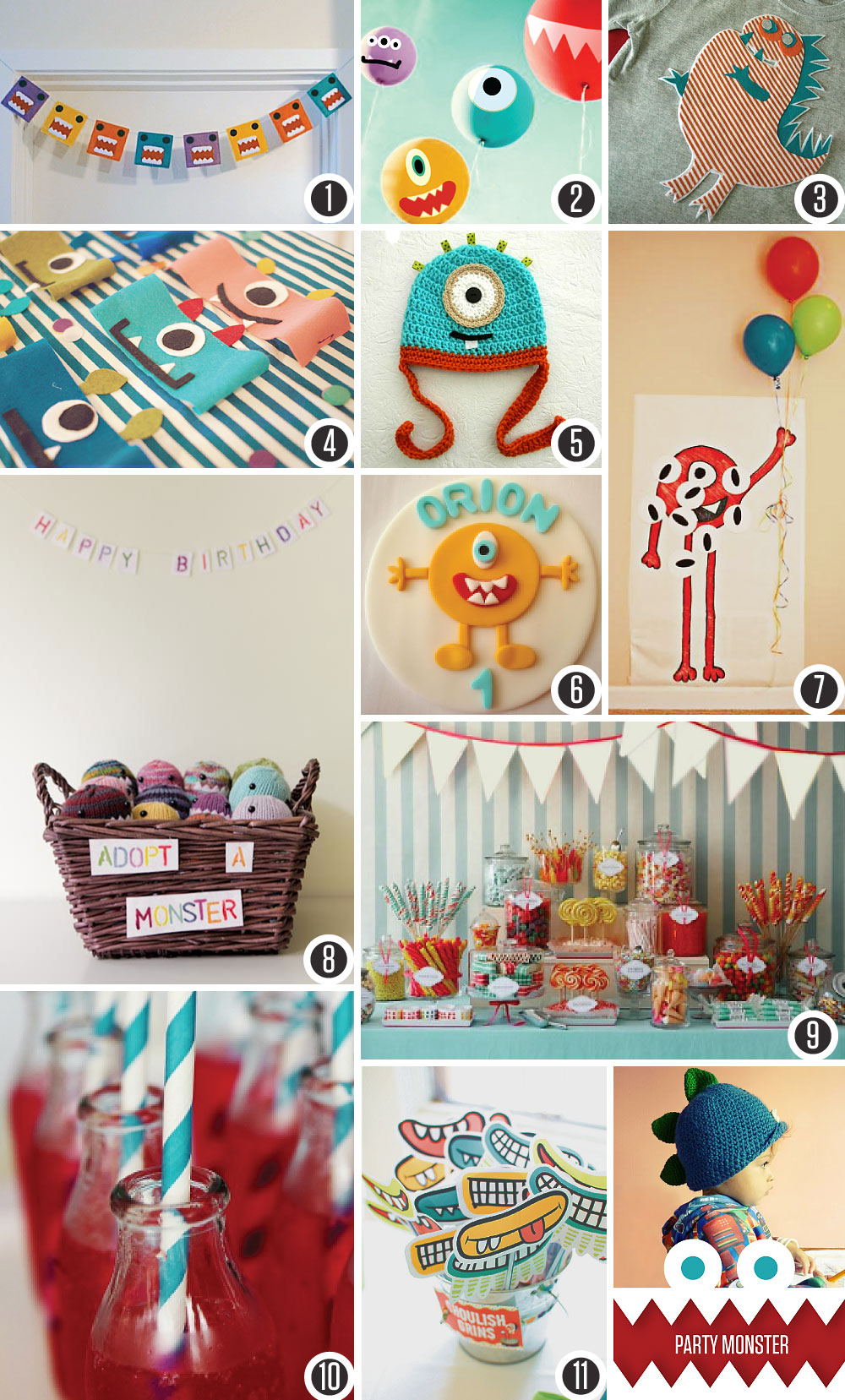 An embarrassingly long time ago, my high school friend asked me for a little advice on her son’s first birthday. She had seen Laelia’s first birthday on pinterest sent me message explaining that her son’s birthday is at the end of January, and she was afraid that it would fall by the wayside because of holiday planning and festivities. I was very flattered she asked for my advice, and I offered to make an inspiration board for her! Well, it’s months later (as I was also caught up in our own festivities), but hopefully I’m posting this just as she’s becoming super motivated to get things done! Also, I hope you all can be inspired by what I put together here too. :)

The theme she and her husband chose is a monster theme. Firstly, where to start with a monster party? There are so many franchises; Monsters Inc., Sesame Street, Yo Gabba Gabba,  Ugly Dolls—even Domo or Where the Wild Things Are!  It was hard to choose, and I tend to not be into licensed characters very much, so there is only a subtle influence of recognizable characters here.

1) Monster Garland; A domo-inspired felt monster garland. You can buy from made by Gwen, or make yourself!

2) Giant Round Balloons with Painted Monster Faces; I’m a big fan of balloons for kids parties! And the large balloons I love so much lend themselves perfectly to be transformed into one-eyed monsters. You’d either have to paint them yourself or paste on some cut out paper, but either way, it’s adorable and fun! Buy them here or here.
(I found this image via pinterest and it linked to Sweet Shop Lulu’s old website. I can’t find the image on their new website, so here it is on pinterest. I edited the colors to match and I added monster faces to them in Photoshop!)

4) Felt monster crowns;  for guests to feel festive. Or you can make as a party activity!
(image via My Life as a Sugar Lander)

5) Crocheted Monster Hat; to top off the look for the birthday boy! You can also hit up my friend Jess of my little mustache who owns the etsy shop my charming colors!

7) Pin the Eye on the Monster; a cute spin on the traditional pin the tail on the donkey. (image via jennifer.nounce’s Monster Party on HWTM)

8) Adopt a Monster; this is one of the most adorable things ever! Adopt a lonely monster as a party favor… these ones are hand knit by Sara of Twee Baby as favors for her sons first birthday. She even made this AMAZING stop motion video. If you don’t fall in love with these monsters after that, well… Just watch it. :)

The knitting pattern is called Monster Chunks by Rebecca Danger, and it’s FREE! How fun! But, of course, if you you can’t get them done in time, or you don’t know how to knit, I’m sure some cute Ugly Dolls would suffice. Or these DIY felt monsters from one charming party. There are a ton of options here!!
(image via The Daily B)

9) A cereal bar; also a white penant “monster teeth” bunting! I know the photo is of a candy bar, but it should be a cereal bar for the kiddos. Just decorate it like this! Okay, okay, have some candy for the adults… And I just keep seeing sharp monster teeth when I see white buntings with a red string (I edited the color out of this bunting because I was having no luck finding a suitable photo)—is that a bit of a stretch? At the very least, it’s a subtle motif but I love the way it works itself in seamlessly!
(image via  Austin Wedding Blog. Styled by Amy Atlas)

10) Colorful Sodas with Striped Paper Straws; yeah, we aren’t over this yet. LOVE! Especially if you get some green soda! Paper straws can also be found at Sweet Shop Lulu, the Paper Source, and many vendors carry them via Etsy. (image by Rubyju via flickr)

Also, I have a striped theme going on here in general!

11) Monster Mouth Photo Props; Print out some monster mouths and glue them to the paper straws or popsicle sticks! They make adorable photo props. You could even use them in a monster themed photo booth!
(image via JessKelso’s flickr stream)

Please check out my monster party board on pinterest for more monster themed party ideas!

categories / Be Inspired, Inspiration Boards
Tags /
Warning: count(): Parameter must be an array or an object that implements Countable in /nfs/c04/h06/mnt/59434/domains/visualvocabularie.com/html/wp-includes/class-wp-comment-query.php on line 405


2 Responses to Party Monster; a birthday board