Two and a Half Years! 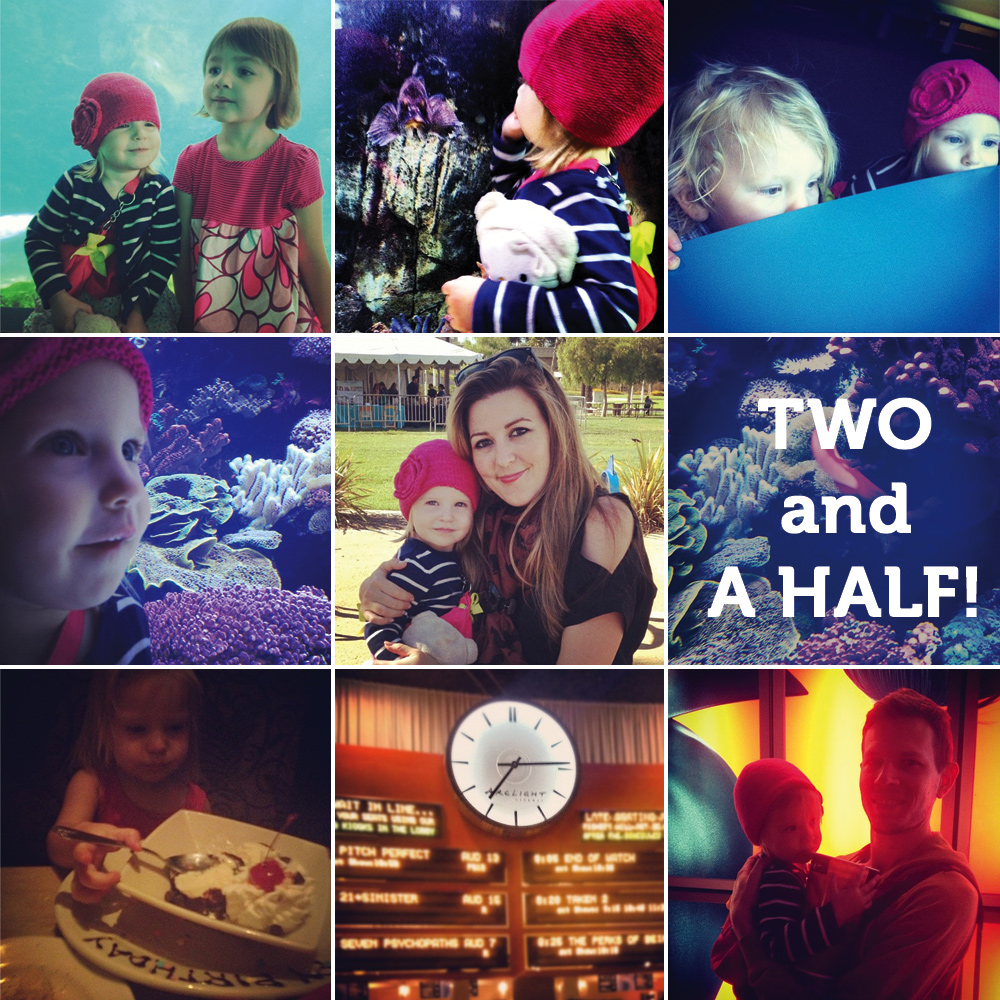 Last Wednesday, Laelia turned turned two and a half! I have found it very fun to always do something a little special on her half birthday, to break up the monotony of  the everyday.  Nothing like a big gathering or a party, but something special just for her. October 17th also happens to be the actual birthdays of my cousin-in-law Becky and our friend Isabella. Last year, we went to the Long Beach Aquarium w/ Isabella for her 3rd birthday, and this year, we went again! This time we were joined by a very pregnant Beth and her son Orion. They had an excellent time running about and watching the fish. Later, we met Tyler at his work and then went at the Cheesecake Factory down the street for a sundae. I asked our waiter (who was really great) to put a candle in her sundae, because, whereas on her second birthday, she did not really understand birthdays, now she does. Well, she at least sees them as something exciting; she knows they are someone’s “special day” (which is what she was saying all day; “it’s my special day”). So when they brought out her birthday sundae and put it in front of her and started singing, her eyes bulged in recognition and I totally got a lump in my throat! Then I somehow managed to convince him to take Laelia to her first movie! We went to the Arclight (also in the Sherman Oaks Galleria) and saw Hotel Transylvania. She definitely did not like the few short parts where Dracula’s eyes went red, but she sat through almost all of it before she stood up and said “bye-bye?”. Definitely a fun day!

I haven’t updated on the things Laelia can do in a long while, so I figured I’d better do it now, before, you know, she starts reading & writing and I haven’t noted it.
– After two months of taking naps in her crib, Laelia started sleeping in her crib at night as well. There have only been a few nights when she woke up, and I think it’s mostly due to getting her two-year molars in.
– She’s been singing her ABCs for several months now. She especially likes to do it while spinning in circles!
– She can identify all of the letters.
– She can count to 20 in English.
– She can count to 10 in Spanish.
– She says “Thank you” and “You’re welcome” with out being prompted.
– She said “gracias” last night, after I put a bandage on her finger.
– She still needs to occasionally be asked to say “please”, but she will say it with out being asked as well.
– She knows all the primary and secondary colors.
– She knows how to say most of the primary and secondary colors in Spanish.
– She can complete large 24 pc or 36 pc jigsaw puzzles, often with no help at all!
– Sings Mary Had a Little Lamb and the Itsy Bitsy Spider.
– Makes pretty awesome Lego towers. Exclaims “look, a castle!”.
– Is really into the Care Bears and Mario. A girl after my own heart!

I’m currently doing a little research about home pre-schooling. I get a lot of crazy looks and “really?”s and “are you sure?”s, but — let’s face it, after a planned home birth, co-sleeping, babywearing, cloth diapering, and “extended” breastfeeding, I’m pretty used to odd looks and people telling me I can’t or shouldn’t do something because of their own preconceptions (and no actual research) on a subject. I’m keeping an open mind about it, and I simply think that the cost of pre-school is too high in our area, especially if I’m already home. I’d rather send her to ballet classes, and take her to museums and  outings with other children to keep her “socialized”, while I have direct one-on-one teaching with her, and I can help with manners as well. I’ve been looking at some Montessori books and some workbooks, and I plan to start in January (although, from what I can gather so far, I think Tyler and I  already doing a lot of what these books suggest, it is just our parenting style!). Anyway, I’m sure I’ll give it a post of its own! If you have any experience or any suggestions on books to read, please let me know!

categories / As Laelia Grows
Tags / Becky Dodson
Warning: count(): Parameter must be an array or an object that implements Countable in /nfs/c04/h06/mnt/59434/domains/visualvocabularie.com/html/wp-includes/class-wp-comment-query.php on line 405