Welcome to Zoey’s first birthday post! I’m sure you remember my friend Andy whom I introduced you to in my post about her and her work, and who took photos of Laelia’s birthday for us. Well, we essentially did a little trade, and I took photos of her sweet daughter’s birthday party! This was my first experience ever photograph-ing an event. I don’t really consider myself a photographer–I don’t know a lot of the technical stuff that goes behind it. I only somewhat understand how the camera works. BUT, I certainly know how to use photoshop and I’m definitely an image-maker, so I think it worked out well enough! I’ve discovered recently that I really love photography, and photo styling, I just didn’t realize how much until I started blogging!

It’s probably needless to say, but I was in heaven shooting this party. Everywhere I looked there was an awesome frame to be made! Andy and her husband Danny, with the help of their family and friends, put a lot of effort into this special day for Zoey. I asked Andy a few questions so we can hear from her directly!

JDM: Where did your inspiration come from?

Andy: A lot of my inspiration for Zoey’s party came from pretty things i found on pinterest. I knew I wanted to do a color theme, so I naturally just picked my, [I mean Zoey’s? :) ] fave colors, the ones from her nursery. Pinterest has really changed the way I organize ideas and it was amazing to see how many of my pins came to life at her party! I thank all of the creative minds that are behind those great ideas—and the people that pinned them! :) Another huge inspiration was little Laelia’s first birthday party. Shooting that party pushed me in the right direction in getting all those itty bitty details perfected. You (Jesyka!) and I have so many similar visions, it was so exciting to see those live at Laelia’s party, then re-create some of them in my own way.

One of the coolest things Andy was stirred to make was the hot air balloon inspired photobooth! Danny built the frame, and Andy covered the top in polka dot paper from the paper source, and then covered the bottom with some burlap, and added the finishing touch of one of her signature fabric buntings. If you check out Andy’s board on pinterest, Zoey’s first birthday, see if you can’t find other things that helped inspire her! (I spy some rice crispy cakes!)

JDM: Fun Fact: Zoey’s birthday is May 30th, but her birthday party was held on June 25th. Please tell us about the reason behind the almost month long delay of Zoey’s party.

Andy: We originally had the party slated for May 28th, but pushed it back till the end of June to finish our huge backyard renovation that we started in February. We initially just wanted a deck, but after we started digging, we realized that we might as well paint the exterior, install new sprinklers, lay new sod and throw in a homemade picket fence while we were at it! I did the easy part—picking colors and designs. Danny did the rest! My husband is a machine. He would come home from work, change, and be in the yard for eight hours until the sun went down. With his dad’s help, they did everything themselves. Zoey’s dad even built her a giant sandbox and chalkboard just in time for all of her friends to enjoy at the party. I don’t think there’s anything that she couldn’t get him to do for her. :)

Isn’t that amazing! Only a few weeks before Zoey’s party there was no deck, no grass, no sandbox, no chalkboard… And their backyard is pretty huge! So this party doubled as a debut of their brand new backyard. :)

JDM: Tell us about your food and the lovely dessert table!

Andy: The food was made by my parents, who own their own catering business. I can’t think of a party that I had growing up that didn’t have my mom’s incredible food! So I knew I wanted the family grub for zoey’s special day. All of the desserts were made by Zoey’s grandma, aunties and her mama’s friends. I wanted a smorgasbord of sweet delights and tapped my best friends for their signature treats and dared them to make a few delights I found on pinterest. I handmade the dessert flags and mini-confetti bunting on zoey’s birthday cake.

As a party goer, I can tell you that the food was DELISH. Honestly, I ate at least two full plates of salad, and then half of my husband’s. :) And for decorations, Andy also made the beautiful fabric strip bunting that hangs over her beloved aqua ruffled duvet cover, the fabric tassels hanging from the  new deck awning (inspired by confetti system and Laelia’s party), in addition to the aqua buntings that were strewn around the back yard. 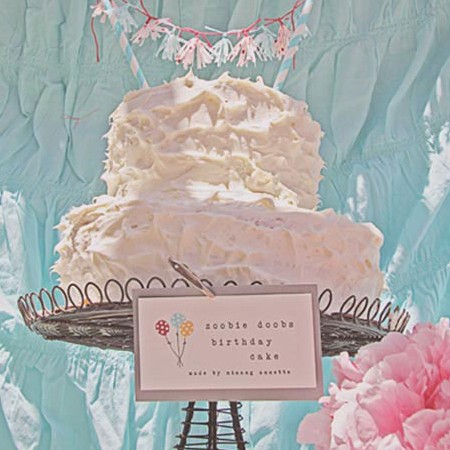 Danny is also in a band, in addition to being a full time California fire-fighter and builder of decks, fences and sandboxes. They played a great set of music, from The Ting Tings and Weezer, to Led  Zeppelin and AC/DC. There was even a very sweet sing-along of the sesame street version of Fiest’s 1 2 3 4 (monsters walking across the floor), which made choke up (apparently, any version of this song will make me choke up! I become reminiscent of when my husband and I were in “courtship”. He introduced me to Broken Social Scene, and we saw them twice when we first started dating…). Also, considering all the work Danny has done on his house for this party, the photo on the bottom left where he is smiling (at Zoey), reminds me of the Animal Collective song My Girls.

There isn’t much that I feel I need
a solid soul and the blood I bleed.
But with a little girl, and by my spouse
I only want a proper house

I don’t care for fancy things
Or to take part in a pressured race.
But to provide for them when they ask
I will, with heart, on my father’s grave

I don’t mean
To seem like I care about material things,
Like our social status,
I just want
Four walls and adobe slabs
For my girls 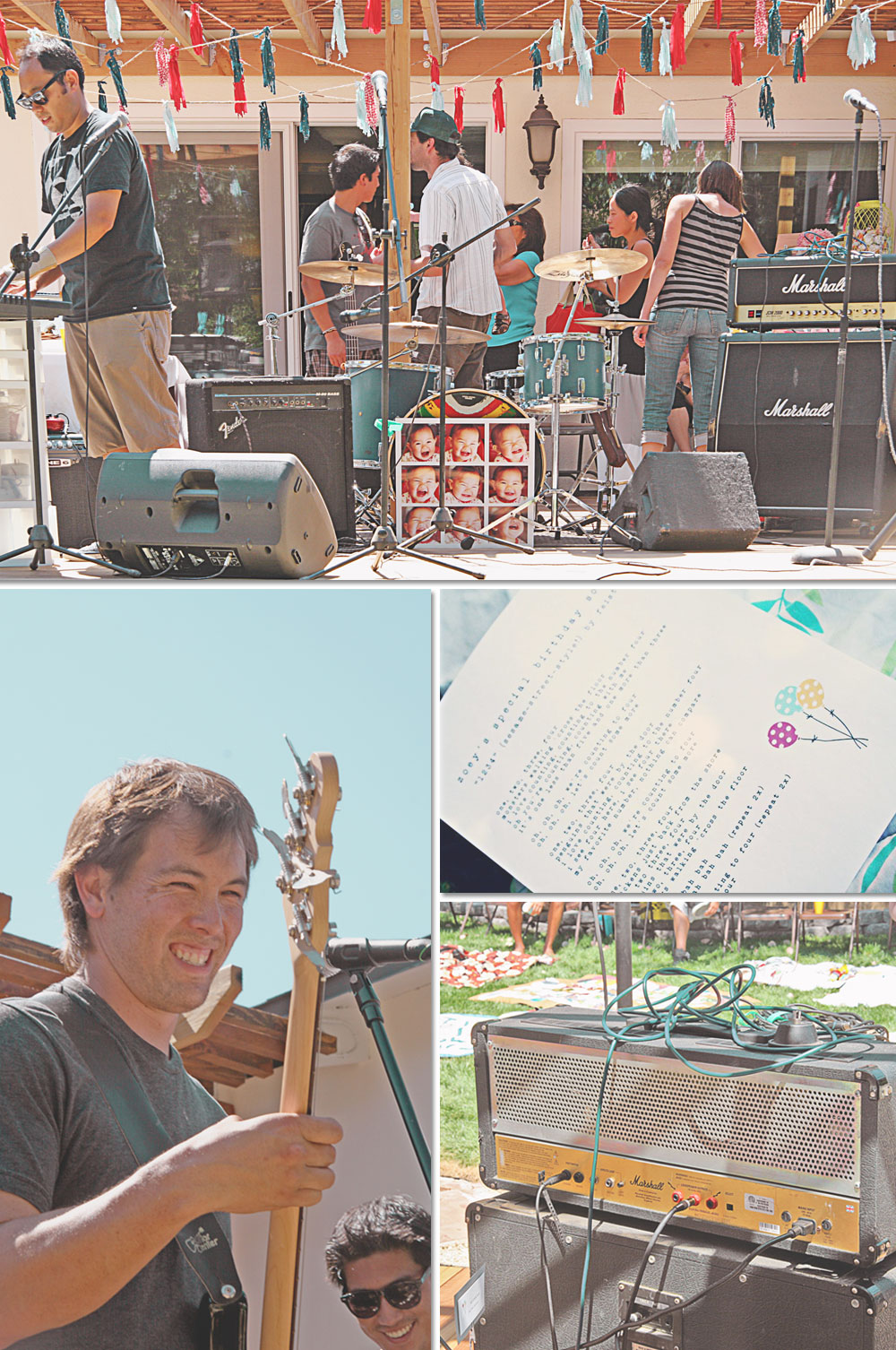 I hope you all have enjoyed Zoey’s first birthday! I know we did. :) 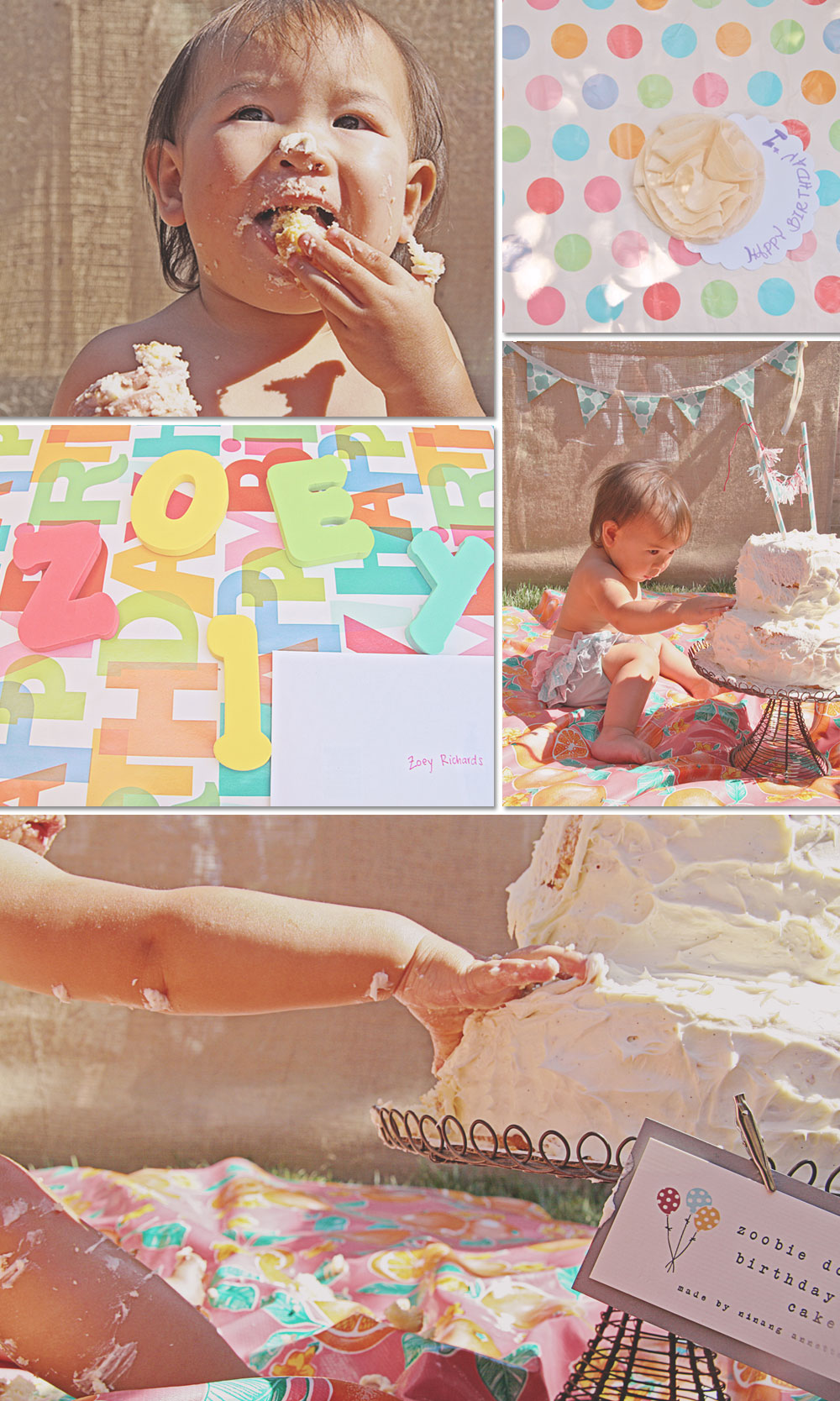